I am a food blog 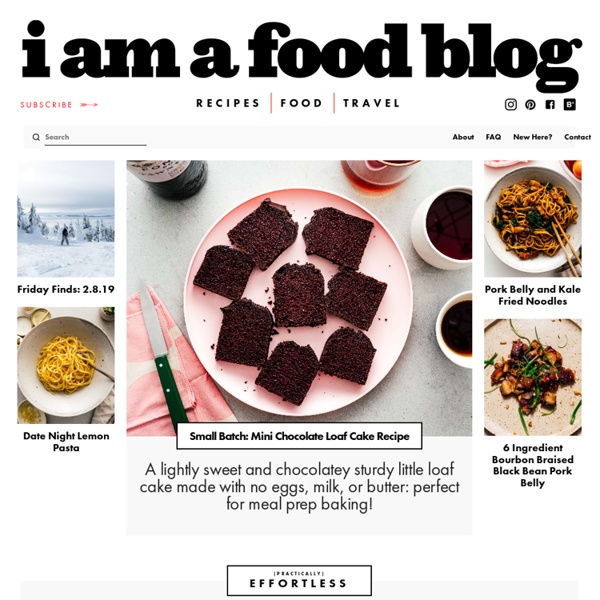 Asparagus and Eggs, Two Ways I've been having lots of issues with soft boiled eggs lately. Not the soft-boiling part, but the peeling. It's strange because (not to be boastful or anything) I never used to have issues peeling eggs. I always wondered what the big fuss was - my egg shells always came off gloriously easily. I'm not sure if my eggs are too fresh, or if I'm being too rough, but egg peeling has become my most hated kitchen task.

Wrightfood I have eyed this recipe up for a couple of years now. A few years ago my good friend Marc gave me a bunch of suggestions for cookbooks. I had reached a rut in what I was cooking, and wanted an out. Marc is a total hoarder (honestly, his habit redefines the term hoarding) of cookbooks so he seemed like the logical person to turn to. Among many books he recommended that day was “Thai Food” by David Thompson. What I Ate Wednesday — hipsterfood As a food blogger, I read a lot of food blogs, food magazines and cookbooks, and watch a lot of cooking shows and Youtube channels. All of that information, though, can leave me a little paralyzed. If you don't make something intricate or "epic" you can feel like what you're eating isn't up to par or isn't share-worthy. Back when I started this blog, almost four years ago, I ended up not even cooking (or eating) at all because I felt so defeated when looking at others' high level of work. Today, I'm happy that I feel so strongly the opposite of this. Food shouldn't have to have chef-like perfection, Pinterest-worthy visuals, or Youtube "epic" intricacy to be nourishing to your mind & stomach.

recipes Post Punk Kitchen recipes New to vegan baking? Vegan Richa - Breads, Indian Vegan Recipes, Eggless, Dairyfree, Vegetarian Recipes, many Gluten-free Riz pour Sushi Vous vous demandiez peut-etre “mais quand est-ce qu’elle va nous montrer la recette des sushis?!?!” , hehehe! Et vous aviez raison, parce que c’est un classique incontournable! Bacon Jam - Your Wildest Dreams Come True! I first heard about this rather bizarre concept from the blogger Morta Di Fame (meaning literally dying to eat, a concept I can wholly understand). She linked to a recipe for Bacon Jam which was originally a product that a company called Skillet Foods makes and sends around the United States. Knowing that I'd have no chance of getting my greedy paws on a jar I simply daydreamed about it and for every day since I saw it, I'd think about it.

The Vanilla Bean Blog Reclaiming Your Castle Host the Toast Is this turning into a food blog? Here’s the thing, so much of my life is consumed with cooking and feeding little mouths that sometimes that’s all I can think about! Or is that an just an excuse for the fact that I love to eat? Natoora Blog A dense, fragrant and delicious cake made with only a few ingredients, to make the most of the citrus season. Perfect with any orange – blood oranges for the sweet-tooth; or use with pink oranges for a more sweet-sour result. Blood Orange and Almond Cake 8-10 people Preparation Time: 15 minutes Cooking Time: 3 hours

Oreo Stuffed Chocolate Chip Cookies Yes, you read that right - Oreo stuffed chocolate chip cookies! After spending too many hours on Pinterest, I saw several recipes for this new "trendy" dessert, and I could hardly wait to try it myself. If you have a favorite chocolate chip cookie recipe, use it!

This blog was one I was instantly attracted to. Right as I opened it I knew I wanted my blog to look similar to it in some ways. The blog is full of recipes, but what makes these look so delicious is the pictures. The way the pictures were taken helped give me ideas for my own. The thick heading, clear pictures and descriptions inspired some formatting in my blog. by heidijmcgilvray Apr 10