Worrying about a loved one's health could do more harm than good. There have been many studies into how our mental health can influence our recovery from illness or trauma - and maybe even help us live longer. 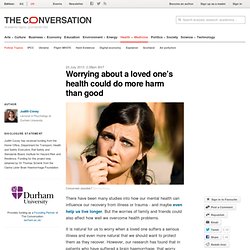 But the worries of family and friends could also affect how well we overcome health problems. It is natural for us to worry when a loved one suffers a serious illness and even more natural that we should want to protect them as they recover. However, our research has found that in patients who have suffered a brain haemorrhage, that worry might not be the best way to support recovery. Working with colleagues at the University of Liverpool and the University of Erlangen-Nürnberg in Germany, we surveyed 69 patients who had experienced a spontaneous subarachnoid haemorrhage (SAH) and a friend or family member most involved in providing informal support after illness. A traumatic experience An SAH can increase pressure in the skull, damage or kill brain cells, and deprive the brain of oxygen, causing stroke and lack of neurological function.

How a quarter of the cow genome came from snakes. Genomes are often described as recipe books for living things. 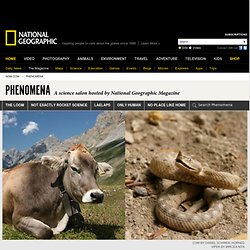 If that’s the case, many of them badly need an editor. For example, around half of the human genome is made up of bits of DNA that have copied themselves and jumped around, creating vast tracts of repetitive sequences. The same is true for the cow genome, where one particular piece of DNA, known as BovB, has run amok. It’s there in its thousands. Around a quarter of a cow’s DNA is made of BovB sequences or their descendants. BovB isn’t restricted to cows. The obvious interpretation is that BovB was present in the ancestor of all of these animals, and stayed in their genomes as they diversified. But not so. This is because BovB isn’t neatly passed down from parent to offspring, as most pieces of animal DNA are. This type of “horizontal gene transfer” (HGT) is an everyday event for bacteria, which can quickly pick up important abilities from each other by swapping DNA.

A family tree of BovB sequences How did it manage?

Birth. Gene Hacking: Explaining a Breakthrough in Down Syndrome Research. A new treatment for Down Syndrome mirrors genetic evolution by hacking an already-existing hack of our genes. 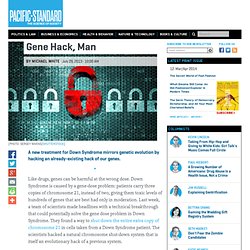 Like drugs, genes can be harmful at the wrong dose. Down Syndrome is caused by a gene-dose problem: patients carry three copies of chromosome 21, instead of two, giving them toxic levels of hundreds of genes that are best had only in moderation. Last week, a team of scientists made headlines with a technical breakthrough that could potentially solve the gene dose problem in Down Syndrome. They found a way to shut down the entire extra copy of chromosome 21 in cells taken from a Down Syndrome patient. The scientists hacked a natural chromosome shut-down system that is itself an evolutionary hack of a previous system. Much like the extra chromosome 21 in Down Syndrome, sex chromosomes present a dose problem: Males of nearly all mammal species have one X chromosome, while females have two copies. Women better off without bras: French study. Women pose during a promotional shoot for a new brand by Wonderbra in Madrid in 2007. 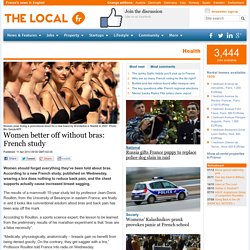 Photo: Bru Garcia/AFP Women should forget everything they've been told about bras. According to a new French study, published on Wednesday, wearing a bra does nothing to reduce back pain, and the chest supports actually cause increased breast sagging. The results of a mammoth 15-year study led by professor Jean-Denis Rouillon, from the University of Besançon in eastern France, are finally in and it looks like conventional wisdom about bras and back pain has been way off the mark. According to Rouillon, a sports science expert, the lesson to be learned from the preliminary results of his marathon experiment is that “bras are a false necessity”. “Medically, physiologically, anatomically – breasts gain no benefit from being denied gravity. Jean-Denis Rouillon (Photo courtesy of Osteopaths de France) See also: Women around the world react to controversial bra study.

“These are preliminary results,” Dr.