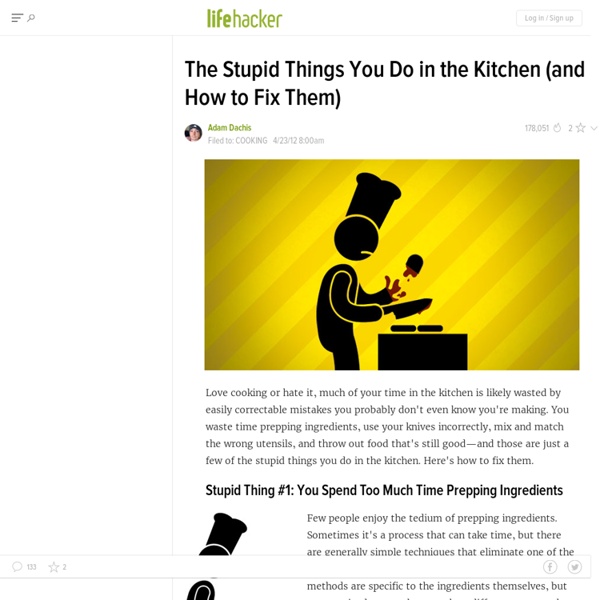 Love cooking or hate it, much of your time in the kitchen is likely wasted by easily correctable mistakes you probably don't even know you're making. You waste time prepping ingredients, use your knives incorrectly, mix and match the wrong utensils, and throw out food that's still good—and those are just a few of the stupid things you do in the kitchen. Here's how to fix them. P Stupid Thing #1: You Spend Too Much Time Prepping IngredientsP Few people enjoy the tedium of prepping ingredients. Say you're cutting a bunch of carrots into sticks; it doesn't make sense to trim, peel, and slice each one individually. It also helps to use two bowls—one for scraps and one for cleaning—so you don't make a mess during the preparation process. These are all great ways to save you time and keep you organized, but a few common ingredients have tricks all their own. Stupid Thing #2: You Use Your Knives WrongP The easiest issue to correct is a dull blade, and it's one of the most important.

You're the Guinea Pig: Experimenting with Your Sleep and Dreams I have about 30 sleep apps on my iPhone. It's become a hobby, testing them all out. I am a hospice CNA and a full-time nursing student, so sleep is vital, unfortunately I also have pretty bad insomnia. The best apps I have found for good sleep are the TESLA entrainment apps (Tesla is the company, if you search in the app store. The DREAM:ON experience I had was very similar to the one described. The SLEEP CYCLE app is really nice. There are other "sleep sounds" type apps that I have downloaded. NIGHTSTAND is another app. Hope this helps!

You May Be Able to Actually Make Yourself Smarter—All It Takes Is Practice I totally agree, but don't think that wikipedia-surfing is a good example, because you search for stuff that you want to know (or maybe easier to understand) while when reading a scrience book f.e. you have to read all the way through the article, even if some parts are harder to understand I tend to agree as well, but I've found that as someone who strives to learn almost to the exclusion of all else in my life, when that learning is severely depressed by any of a variety of factors, I'm encouraged to drink. Maybe dumb people don't 'not care,' but they're just not as capable of learning, and lack to means of acquiring the necessary facilitation to expand their minds. But yes, the desire, the motivation is a key factor in anything.

Top 10 Tips and Tricks to Train, Exercise, and Better Your Brain Take 4 omega 3-6-9 omega 4 fatty acid pills. Then the following days take one pill every hour and half until you have reached ten pills. Then take 3 pills every day. If you drink coffee or alchahol you have to start over. Within a month when the fatty acids have reached potency in your blood you will feel really sane, all the time. Sit in the sun for an hour and a half a day. Meditate on compassion (hugging a starving african child, in you MIND) Have a source for good safe sex that doesn't cause you stress (a challenge) Avoid sex or swapping fluids with anyone until you know their over all health to detect STDs. Do not eat food that has been left out. Do not eat food some one else has prepared. Do not eat boxed products that contain gluten. Minimize consumption of wheat, corn, soy, dairy, or non-organic flesh. Learn to grow your own Chia food. Eat lots of spouts. Eat Broccoli and Plantains. Do everything in this article. Do Yoga. OH YEAH, and get a fixed gear bike and use it.

Top 10 Crazy Kitchen Tricks That Speed Up Your Cooking I would like to add that the wider the ring, the easier it seems to be. I had a titanium ring more than twice the width of the one shown in the video and it was easy as hell. My wedding ring (which is about the same size as the one in your linked video) still works, but takes more effort and can hurt if I don't leverage it JUST right. I would also like to echo the sentiments of not using your wedding ring (At least in view of your significant other). The one time I got caught doing it, my wife was PISSED. Yea, definitely the wider the ring the better. I usually just use another bottle of unopened beer.

Ways to Stop Wasting So Much Food in the Kitchen Unless you're a kitchen ninja that can plan and measure out the exact portions for every meal you make it's likely you find yourself wasting good food because you didn't plan right, you forgot about it, or you just had no idea what to do with it. Thankfully, it's not too difficult to cut down on your kitchen waste. Here's how to do it.P Whether you're cooking for 10 or for one, wasting food in the kitchen is easy no matter how strictly you plan everything. Link All Your Meals Together On Your Grocery ListP SExpand Chances are you're not the perfect household of eaters and you can't buy the exact portion of food you really need at the grocery store straight off the shelf. First, you should be realistic. Organize Your Fridge and Draw Attention to What's Going Bad FirstP All the preparation in the world isn't going to save you from yourself and your forgetful ways. Both methods require one, very important thing: knowing the shelf life of your food. Find Clever Alternative Uses for FoodsP

Do I Really Need to Worry About Security When I’m Using Public Wi-Fi? SExpand Remember, not only is there at least 30 hackers waiting at every free wifi spot, but the bushes around them are full of terrorists as well. If you make sure you are using for the sites you go to, you will be fine. Don't go logging into your FTP servers, or email via unencrypted connections. If you are super paranoid, never ever use a open Wifi, always use a 256bit AES VPN tunnel via a 4G cellular card and change the password every 30 minutes, and get yourself a laptop privacy LCD screen along with a laptop sweater. Everyone else, just make sure you are not entering passwords into websites unless you are using the and you will be fine 90% of the time. and pay attention to any security warnings or certificate warnings. Finally, if you are in a starbucks, connect to the starbucks wifi, not the "happyfunfreewifi" access point.

Embrace the Supernatural: How Superstitions, Placebos and Rituals Encourage You to Achieve Your Goals For me, it comes down to the science underlying the phenomenon, and by science I mean actual hard numbers published in peer reviewed journals. For example, the placebo effect is a real measurable phenomenon and has been documented in hundreds of examples, and even salami-sliced to uncover some facets of it (such as the fact that the magnitude of the placebo effect is different if the patient is told that the drug they're getting is cheap or expensive, as published in NEJM a couple of years back). On the other hand, some of the stuff in the above article, including single "lucky" anecdotes, does not even warrant discussion. Same goes for religion - there's a famous bumper sticker "nothing works like prayer", which is actually 100% true if you think about it correctly! There have been numerous studies in peer reviewed medical journals showing that having people pray for patients has absolutely no effect whatsoever on the outcome of an illness.

Identify and Avoid Signs of Burnout with This Infographic Really? Why not? It's well documented that the effects of sleeplessness are very similar to those of drunkeness in early stages, you hear about it a lot in tired-crash-related media Peer reviewed source: here . I don't really buy it either. Most because I push my own limits frequently, sometimes only getting 3, maybe 4 hours a night. Me neither, and it sounds like a misleading figure. a) "one hour of sleep per night for a week" means one hour off the *baseline minimum* sleep time a given individual requires for optimal performance. b) "cognitive degradation" is the sticky part, and there are a number of ways to measure this.