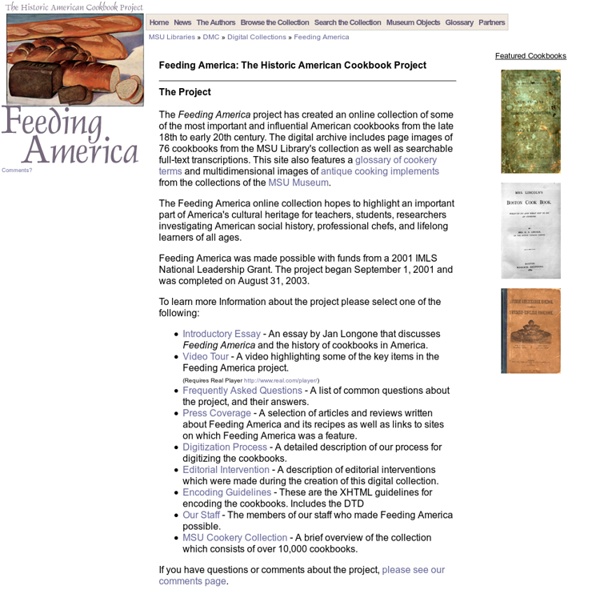 Feeding America: The Historic American Cookbook Project The Project The Feeding America project has created an online collection of some of the most important and influential American cookbooks from the late 18th to early 20th century. The digital archive includes page images of 76 cookbooks from the MSU Library's collection as well as searchable full-text transcriptions. This site also features a glossary of cookery terms and multidimensional images of antique cooking implements from the collections of the MSU Museum. The Feeding America online collection hopes to highlight an important part of America's cultural heritage for teachers, students, researchers investigating American social history, professional chefs, and lifelong learners of all ages. Feeding America was made possible with funds from a 2001 IMLS National Leadership Grant. To learn more Information about the project please select one of the following: Top of the Page

U.S. Army Center Of Military History Making of America aking of America (MoA) is a digital library of primary sources in American social history from the antebellum period through reconstruction. The collection is particularly strong in the subject areas of education, psychology, American history, sociology, religion, and science and technology. The collection currently contains approximately 10,000 books and 50,000 journal articles with 19th century imprints. For more details about the project, see About MoA. Making of America is made possible by a grant from the Andrew W. New Additions: We have recently added a new feature, subject browsing. 99 more volumes focusing on New York City were added to MoA in June 2007.

Atlas of the Historical Geography of the United States A spectacular historical atlas refashioned for the 21st century Here you will find one of the greatest historical atlases: Charles O. Paullin and John K. Wright's Atlas of the Historical Geography of the United States, first published in 1932. This digital edition reproduces all of the atlas's nearly 700 maps. Many of these beautiful maps are enhanced here in ways impossible in print, animated to show change over time or made clickable to view the underlying data—remarkable maps produced eight decades ago with the functionality of the twenty-first century. hide introductory video next Old Atlas, New Functionality Georectified Maps Most maps in the atlas have been georectified, warped so that they can be placed consistently on top of a digital map. Navigating the Atlas For most maps in the atlas click on georectified ⇆ plate to toggle back and forth between views of the georectified maps and how they look in the printed atlas. There are lots of maps in the Atlas.