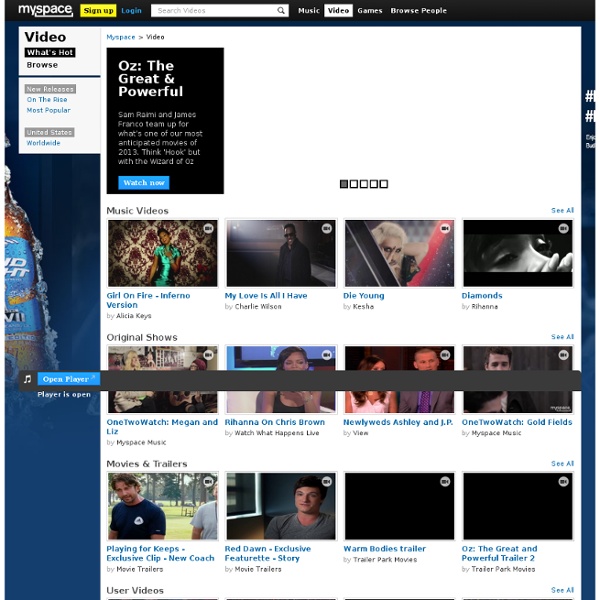 Free Movie Catalog Free movie downloads How to watch and download movies from your computer Select a movie by alphabet or title, then choose your viewing or download options. Pixar's First Movie Andre & Wally B : I Love Sharing Videos Personal Stories & Experiences. Read and Share True Stories, Learn and Support. Many people think Luxo Jr. is the first Pixar animated film (see below), but it's technically the Adventures of Andre and Wally B, produced while the soon-to-be Pixar crew was still at Lucas studios. Watch this and ask yourself--can you believe this was made in 1984!?! Then read on for the back story and video comparisons to the modern day Pixar. Google Vidéos MoreEven more from Google Sign in Videos Privacy Terms Settings Advertising Business About

Welcome to ClipShack Hung s01e09 (PSP, iPod, Zune) Hung s01e09 (PSP, iPod, Zune) Type: Video > Handheld The Art behind Meet me far Artist and Animation Director Ran Sieradzki was kind enough to shows us some of the art behind “Meet me far”, an animated music video created in 3D. The idea for a music video came when Sieradzki initiated a call to a well-known singer and offered to create a video for one of his songs. The video completion took over two years and by the time it was finalized Sieradzki and his team had lost their original singer. After several failed attempts to find a new song for the video, Sieradzki was approached by music producer/composer Tomer Biran. The song suggested by Biran worked perfectly and there was no need to change the animated video. From concept character design to 3D rendering, view the music video below and tell us; does the concept compare to the finished product?

Universe Explorers TV Unbeknown to many, near the southern end of Lake Taupo, New Zealand there is enigmatic wall called Kaimanawa Wall. The wall is composed of megalithic blocks with symmetrical corners. Since its discovery the New Zealand government has continued to suppress this piece of ancient history. Visit Radiation Poisoning Chernobyl Uncensored - Documentary ForbiddenKnowledgeTV Alexandra Bruce April 27, 2014 Yesterday was the 28th anniversary of the Chernobyl disaster and this is an excellent film reveals many secrets kept hidden by the former Soviet Union. An explosion and fire at the Chernobyl Nuclear Power Plant in Ukraine, then a part of the Soviet Union. released large quantities of radioactive particles into the atmosphere, which spread over much of the Western USSR and Europe. The Chernobyl disaster is the first of the two worst nuclear power plant accidents in history, classified as a level 7 event on the International Nuclear Event Scale, the other being the Fukushima Daiichi nuclear disaster in 2011, which may have already eclipsed the ravages of Chernobyl, if the same level of secrecy practiced by the Soviets is today being practiced by the Japanese and the interests of the nuclear energy industry. For more Radiation Poisoning videos, click here See the complete catalog offorbidden knowledge tv videos