Antarctica Is Going Green, Thanks To Climate Change. Climate change deniers have pointed to Antarctica’s apparently slow rate of change as a reason to doubt the scientific consensus on global warming. 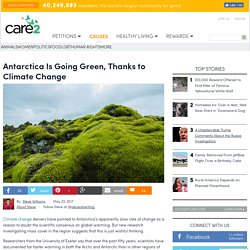 But new research investigating moss cover in the region suggests that this is just wishful thinking. Researchers from the University of Exeter say that over the past fifty years, scientists have documented far faster warming in both the Arctic and Antarctic than in other regions of the globe. Indeed, the Antarctic Peninsula has experienced an air temperature change of close to 3°C. And ocean temperatures west of the Antarctic Peninsula have warmed by roughly 1°C since 1995. 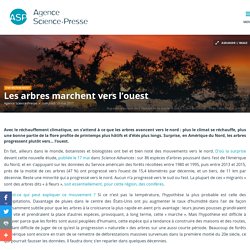 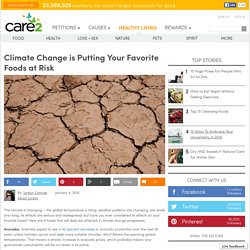 Its effects are serious and widespread, but have you ever considered its effects on your favorite foods? Here are 6 foods that will likely be affected if climate change progresses. Avocados. Scientists expect to see a 40 percent decrease in avocado production over the next 30 years unless farmers uproot and seek more suitable climates. Climate change is coming for the Southwest’s forests. Southwest folks, prepare to wave farewell to your beloved pines. 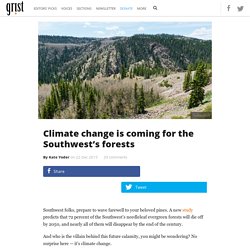 A new study predicts that 72 percent of the Southwest’s needleleaf evergreen forests will die off by 2050, and nearly all of them will disappear by the end of the century. And who is the villain behind this future calamity, you might be wondering? No surprise here — it’s climate change. The study, published in the journal Nature Climate Change on Monday, based its bleak conclusion on a variety of field results, regional projections, and global simulation models. “No matter how we investigated the problem, we got the same result,” Sara Rauscher, a member of the University of Delaware team that conducted the study, told UDaily. Climate change is a real (Canadian) peach. Climate Central has the story: Shoppers walking down the produce aisle in search of peaches for their grandmother’s famed summertime pie may soon check the price tag and find something they’ve never seen before: “Country of Origin Canada.”As climate change warms the planet and growing regions shift further north, more fruits and vegetables – even citrus fruits – could start making the journey to the United States from Canada. 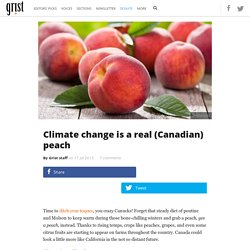 Extreme winter cold and shorter growing seasons historically have prevented certain crops from being grown there, but as temperatures rise and first frosts happen later, the time could be ripe for Canadian farmers to expand their ranges. These lovely, innocent wildflowers are slowly dying. Thanks, climate change! What would the planet look like without lichen? Do you like lichens? 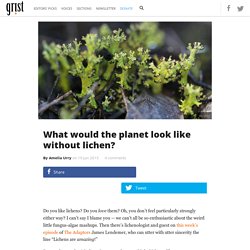 Do you love them? Oh, you don’t feel particularly strongly either way? Think climate change will be good for plants? Think again. Heads up, plants: Climate change is winding up for a one-two punch right in the stomata. 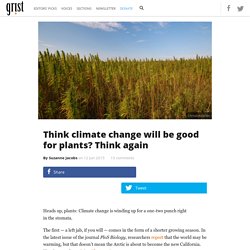 The first — a left jab, if you will — comes in the form of a shorter growing season. In the latest issue of the journal PloS Biology, researchers report that the world may be warming, but that doesn’t mean the Arctic is about to become the new California. Climate change is messing with leaves, and leaves are messing back. Climate change is a lot like Mr. 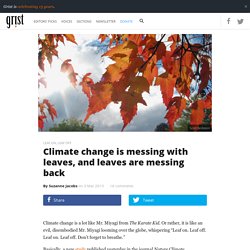 Miyagi from The Karate Kid. Or rather, it is like an evil, disembodied Mr. Miyagi looming over the globe, whispering “Leaf on. Leaf off. Future forests to be smaller, less majestic. To the list of ways climate change is slowly but surely rewriting the world as we know it, add “making forests less awesome.” 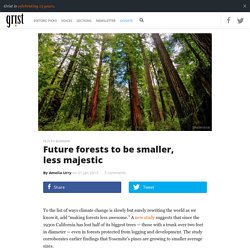 A new study suggests that since the 1930s California has lost half of its biggest trees — those with a trunk over two feet in diameter — even in forests protected from logging and development. The study corroborates earlier findings that Yosemite’s pines are growing to smaller average sizes. The researchers believe climate change is a major factor. Dwindling snowpack and rising temperatures mean plants have unreliable water supplies during the dry season, and they also lose water at a higher rate.

Europe’s Forests Suffer Effects of Climate Change. By Alex Kirby, Climate News Network LONDON − Climate change is here, it’s happening now, and for the last few decades it has been demonstrably bad news for many of Europe’s forests. 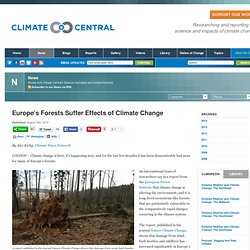 A report published in the journal Nature Climate Change shows that damage from wind, bark beetles, and wildfires has increased significantly in Europe’s forests in recent years. These pictures of spring flowers will melt your frozen heart. Climate change might have had a hand in the exceptionally cold winter much of the country just suffered through, but on the upside, there’s new evidence that it’s sending spring in early, and giving us more time with wildflowers.

That’s the conclusion of one of the most exhaustive surveys ever conducted on flowering “phenology,” the term scientists use for the timing of seasonal events (such as the day the first migratory birds arrive in a given place or, in this case, the first day flowers open). The study was published today in the Proceedings of the National Academy of Sciences. From 1974 to 2012, biologist David Inouye of the University of Maryland took a team to Colorado just as the winter frost was beginning to thaw, and spent the spring and summer documenting when 60 common plant species had their first, last, and peak (i.e., the most individual plants) flowering. “Rock snot” is the grossest climate change effect we’ve ever seen. Look away if you’re eating, because this is truly disgusting. Didymo (code name: rock snot) is an algae bloom that looks like barf mixed with mucus. When it first showed up in eastern Canada in 2006, people assumed it was an invasive species, BECAUSE IT IS SO TERRIFYING.

(Conventional wisdom was that fishers were accidentally spreading it by tromping around with their dirty boots.) Nope! Turns out it’s native — it was just sleeping all this time, and climate change woke it up! Writes CBC News: Algal blooms grow with global warming. The Monday Dispatch article “Toxic algae in Hoover cost city $723,000” revealed the harrowing cost of combating the effects of harmful algal blooms in Columbus. What Will the Fate Be for Bristlecones, the Oldest Trees on Earth? Written by Margaret Badore Bristlecone pines are the the world’s oldest trees, living and reproducing for thousands of years. They live high up in the arid mountains of the Western United States. In an essay for Aeon, Ross Andersen shares his struggles to understand the trees’ age: It is hard to resist cliché when conveying the antiquity of the bristlecone pine. At least there’s one positive thing happening because of climate change. Mangroves in Florida Expanding Due to Climate Change : Biology.

Dec 31, 2013 05:09 AM EST Fewer cold snaps in Florida are helping mangroves extend their territory, according to a new study. Mangroves thrive in warm, salty areas and are known to form complex ecosystems. Their presence in the Sunshine State was limited due to freezing temperatures during winter. However, from the past few years, there has been a decline in the number of days that see temperatures dipping below negative 4 degrees Celsius (25 degrees Fahrenheit). Fewer cold days have led mangroves to getting a foothold in the region. "Before this work there had been some scattered anecdotal accounts and observations of mangroves appearing in areas where people had not seen them, but they were very local," said study lead author Kyle Cavanaugh, a postdoctoral researcher at Brown University and at the Smithsonian Institution, according to a news release. Report: Some plants may not adapt quickly to future climate change. Using the largest dated evolutionary tree of flowering plants ever assembled, a new study suggests how plants developed traits to withstand low temperatures, with implications that human-induced climate change may pose a bigger threat than initially thought to plants and global agriculture.

The study appearing Sunday (Dec. 22) in the journal Nature and co-authored by University of Florida scientists shows many angiosperms, or flowering plants, evolved mechanisms to cope with freezing temperatures as they radiated into nearly every climate during pre-historic times. Researchers found the plants likely acquired many of these adaptive traits prior to their movement into colder regions. Climate change will ruin Christmas by threatening Christmas trees. It will take six to 10 years, but Christmas is ruined — and not for the reasons Sarah Palin thinks. Climate change could turn Greenland green by 2100.

Is Poison Ivy Getting Nastier? Poison Ivy Just Got Superpowers, Thanks to Climate Change. I was pregnant when poison oak first got me. Since I grew up in England, where stinging nettles are as bad as it gets, I had no idea what was going on. But I woke up one morning with weeping blisters all over my arms, an oozing rash on my neck and what looked like a black eye, and my whole body felt maddeningly itchy. Worse still, my doctor forbade any kind of medication because of what it might to do my unborn child. So yes, I am highly allergic to poison oak (and poison ivy and poison sumac, as it turned out), but then so are 80 percent of the population. Explained in 90 seconds: How climate change fuels wildfires. Climate change is making your apples taste different.