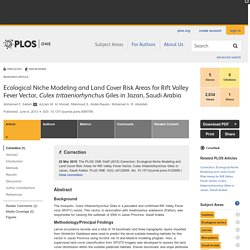 This vector, in association with Aedimorphus arabiensis (Patton), was responsible for causing the outbreak of 2000 in Jazan Province, Saudi Arabia. Methodology/Principal Findings Larval occurrence records and a total of 19 bioclimatic and three topographic layers imported from Worldclim Database were used to predict the larval suitable breeding habitats for this vector in Jazan Province using ArcGIS ver.10 and MaxEnt modeling program. Conclusion/Significance This model is a first step in understanding the spatial distribution of Cx. tritaeniorhynchus and consequently the risk of RVFV in Saudi Arabia and to assist in planning effective mosquito surveillance and control programs by public health personnel and researchers. Editor: Rick Edward Paul, Institut Pasteur, France Received: January 7, 2013; Accepted: April 29, 2013; Published: June 6, 2013 Introduction. PLOS 26/09/14 Simulation Modelling of Population Dynamics of Mosquito Vectors for Rift Valley Fever Virus in a Disease Epidemic Setting. 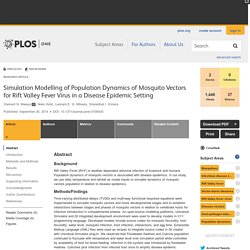 PLOS 01/12/14 Statistical Modeling of the Abundance of Vectors of West African Rift Valley Fever in Barkédji, Senegal. Abstract Rift Valley fever is an emerging mosquito-borne disease that represents a threat to human and animal health. 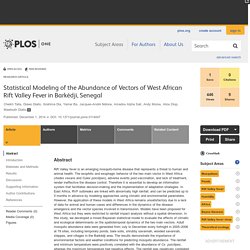 The exophilic and exophagic behavior of the two main vector in West Africa (Aedes vexans and Culex poicilipes), adverse events post-vaccination, and lack of treatment, render ineffective the disease control. Therefore it is essential to develop an information system that facilitates decision-making and the implementation of adaptation strategies. In East Africa, RVF outbreaks are linked with abnormally high rainfall, and can be predicted up to 5 months in advance by modeling approaches using climatic and environmental parameters.

PLOS 14/11/13 Data-Driven Modeling to Assess Receptivity for Rift Valley Fever Virus. Abstract Rift Valley Fever virus (RVFV) is an enzootic virus that causes extensive morbidity and mortality in domestic ruminants in Africa, and it has shown the potential to invade other areas such as the Arabian Peninsula. 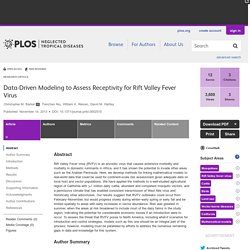 Here, we develop methods for linking mathematical models to real-world data that could be used for continent-scale risk assessment given adequate data on local host and vector populations. We have applied the methods to a well-studied agricultural region of California with 1 million dairy cattle, abundant and competent mosquito vectors, and a permissive climate that has enabled consistent transmission of West Nile virus and historically other arboviruses. Our results suggest that RVFV outbreaks could occur from February–November, but would progress slowly during winter–early spring or early fall and be limited spatially to areas with early increases in vector abundance. Author Summary Editor: Michael J.

Introduction , [24]) and maximal ( Methods Study area Figure 1. Data . PLOS 01/10/14 Stability, Bifurcation and Chaos Analysis of Vector-Borne Disease Model with Application to Rift Valley Fever. Methods Gaff et al. [12] proposed a one host and two vectors population model for RVF with vertical transmission in Aedes vectors to study the transmission of RVF and the impact of vertical transmission on the persistence of the disease. 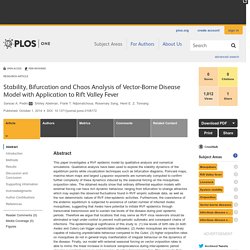 Chitnis et al. [9] analysed a RVF model with vertical transmission for Aedes mosquitoes and included asymptomatic class for livestock and removed one population of mosquitoes. The model presented in this paper adopts a similar structure as in Gaff et al. [12]. We introduce an asymptomatic class for livestock [9], because for many species of livestock, RVF virus infection are frequently subclinical [26], [27]. As the main purpose of this study is to study the dynamic behaviour of the disease, influenced by changes in climate and oscillation of rainfall, we include seasonal variation in the oviposition rates of both Aedes and Culex mosquitoes.

We divide the livestock population into four classes: susceptible, , asymptomatic, , infectious, . Or asymptomatic . . PLOS - JANV 2015 - Modelling the effects of seasonality and socioeconomic impact on the transmission of rift valley Fever virus.