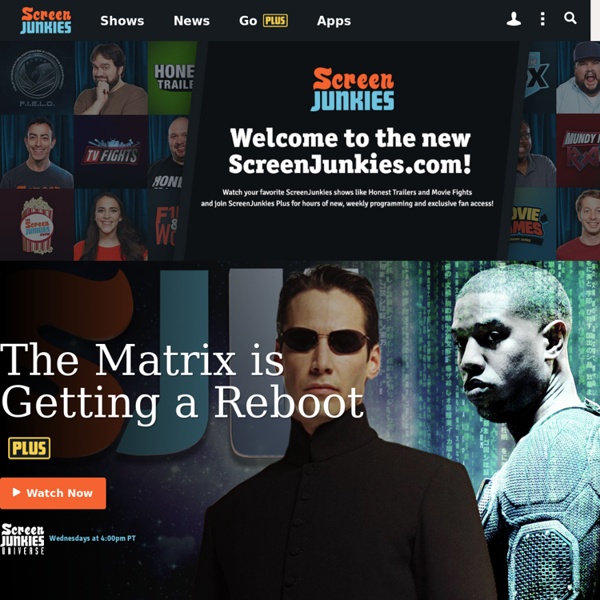 Soundtrack Studies: ‘The Big Chill’ This soundtrack is the musical equivalent of wrapping a chenille blanket around someone, handing them some tea, and repeating softly, “We’re all in this together, and you’re doing great.” Tuesday, April 15 by Penn Collins The Film Cult Presents: Shaun of the Dead Friday, April 18 by Philip Harris Warning!

Download & Streaming : Moving Image Archive : Internet Archive movies eye favorite 2 comment 0 UContentPlayer-TVC-Default-10032021-fixsound Topic: UContentPlayer Programs in&nbsp; TV News Archive for research and educational purposes. Movie Lists In which Zach Braff uses indie rock in an attempt to make morose whining cool. May he’ll play some cowardly liberal this time around. The movie and soundtrack have something to offer, provided you can get past the painful triple-pun title. It’s the satin jacket of soundtracks. Any movie that has Adam Sandler and a ukelele on the poster might as well be marked with a skull and crossbones. You must REALLY like alcohol if you’re willing to these places.

In Contention — Film Awards – Film Festivals – Interviews – Film Reviews – Movie News There is no press release planned for this news but I wanted to pass it along to our readership in any case. After seven years of owning and operating In Contention, first as a blogspot thingamajig, then guiding the .com forward as (I think) one of the preeminent awards season outlets in the space, I’m happy to announce that our little company has been formally acquired by HitFix. The final signatures were committed to paper just after Telluride, which is serendipitous as at last year’s fest, just before the premiere of “Albert Nobbs,” Greg Ellwood first bent my ear and told me his ideas. Then, three swift weeks later — a year ago today, in fact — we officially hitched our wagon to HitFix.

Flavorwire As you already know, The Avengers is pretty much already the people’s choice movie of the year, and has inspired all manner of pop culture tributes in recent months, from the relatively high brow to the delightfully low brow. Well, here’s just one more for you to add to the list, and it comes with a bonus — in addition to being a charming idea, these cute Avengers-themed cocktails, created by the genius mind (and great illustrator) behind The More I Arty, actually look pretty delicious. And hey, a sampling of your favorite before you go see the film in 3-d might just improve the experience. [via Pop Chart Lab]

Les Enfants Terribles (film) Les Enfants terribles ("The terrible children") is a 1950 French film directed by Jean-Pierre Melville and based on Jean Cocteau's novel of the same name. The first feature film of Melville, Le Silence de la Mer (1949), attracted the attention of Jean Cocteau, who commissioned him to direct the film version of 'Les enfants terribles'. Synopsis[edit source | editbeta] Elisabeth is very protective of her teenage brother Paul, who has been injured in a snowball fight at school and has to rest in bed most of the time. The siblings are inseparable, living in the same room, fighting, playing secret games, and rarely leaving the house. Free Movie Catalog Free movie downloads How to watch and download movies from your computer Select a movie by alphabet or title, then choose your viewing or download options. Most of these movies will automatically start to play within a few seconds to a few minutes, depending on the size of the mpeg file. The movies use Quicktime media player which is installed on most PCs.

The 50 Prettiest Porn Stars of All Time 12ozprophet LA TOUR PARIS djbooth WELL$ - Dreams Of An Insomniac kicksoncourt Nike Foamposite One ‘Wheat’ Sample – First Look livemixtapes Dusty McFly - Buffalo Stare [Mixtape] First Pics Of André 3000 As Jimi Hendrix - Films It was just a few weeks back when news broke that André 3000 was going to play rock legend Jimi Hendrix in a new biopic. It seems as if the project is moving rather swiftly as pictures have just emerged of the Outkast frontman on set in almost-full costume. The film, called All Is By My Side, focuses on the late sixties when Hendrix was originally discovered and his ensuing time in London. It's currently being shot in Dublin. Whether or not the film will include any actual Hendrix music is still unsure following various legal difficulties with his estate.

Les Enfants Terribles Summary[edit source | editbeta] This story concerns the siblings Paul and Elisabeth who start this story without a father and with a bed-ridden mother, whom Elisabeth looks after. At school Paul is obsessed with the feminine looking Dargelos, while Paul’s school friend Gerard is enthralled by the siblings. However after Paul becomes ill when Dargelos throws a snowball with a stone inside at him, Elisabeth cares for both him and their mother. Why Hollywood's Biggest Films Are Leaving L.A. for London From "Guardians of the Galaxy" to the next "Star Wars" film, the hottest blockbusters are being lured abroad by London's lucrative tax credit Brad Pitt, Robert Downey Jr., Vin Diesel and J.J. Abrams call Los Angeles home, but for the world premieres of their latest films like "Iron Man 3" and "World War Z," they all decamped for the new hub of Hollywood’s biggest productions — London. It is a testament to how the U.K. city is attracting filmmakers in droves because of lucrative tax incentives that make one of the most expensive cities in the world cheaper to shoot films in than Los Angeles. More than 1,000 films have used the country's film tax credit in the five years since they were established, with the U.K. doling out an estimated £800 million (about $1.2 billion) in rebates.

Johnny Chung Lee - Projects - Wii As of June 2008, Nintendo has sold nearly 30 million Wii game consoles. This significantly exceeds the number of Tablet PCs in use today according to even the most generous estimates of Tablet PC sales. This makes the Wii Remote one of the most common computer input devices in the world. It also happens to be one of the most sophisticated. 9 Actresses Who Are Real-Life MILFs In just a few weeks, the entire gang is returning to East Great Falls, Michigan for American Reunion. That can only mean one thing — Stifler’s mom will be on the hunt. In honor of cinema’s most esteemed MILF, we’ve decided to take a look at some of Hollywood’s real-life MILFs. We would scream at their framed portraits all night long.