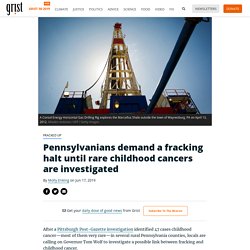 More than 100 organizations and 800 people have signed the letter requesting that all new shale gas permitting be suspended until the Department of Health can demonstrate the cancers are not linked to drilling and fracking operations. “This is a public health crisis that requires immediate and significant action,” reads the four-page letter. The areas south and west of Pittsburgh have long been a hotbed for pollution. As of 2017, there were over 10,000 active fracking wells in Pennsylvania, the majority in the southwest part of the state. The fracking process involves extracting oil and gas from rock by blasting toxic chemicals, sand, and water into drilled wells. Here's The Most Worrisome Study On Fracking's Effect On Health Yet. Proponents of fracking often dismiss their critics for not having sufficient scientific evidence to make their case. 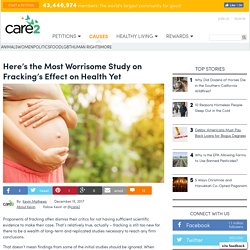 That’s relatively true, actually – fracking is still too new for there to be a wealth of long-term and replicated studies necessary to reach any firm conclusions. That doesn’t mean findings from some of the initial studies should be ignored. When talking about the state of the environment and public health, it’s probably wise to proceed with caution, yet the fracking industry continues to move full steam ahead. Finally, though, there’s a large-scale study that should set off alarms when it comes to fracking. Fracking harms the health of babies, study shows.

This story was originally published by Mother Jones and is reproduced here as part of the Climate Desk collaboration. 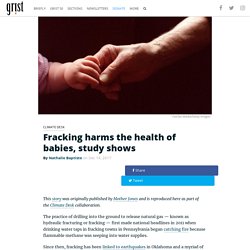 The practice of drilling into the ground to release natural gas — known as hydraulic fracturing or fracking — first made national headlines in 2011 when drinking water taps in fracking towns in Pennsylvania began catching fire because flammable methane was seeping into water supplies. Since then, fracking has been linked to earthquakes in Oklahoma and a myriad of health issues. Proponents of fracking say the practice has reduced energy costs and has created thousands of jobs. But environmental groups, such as the Natural Resources Defense Council, say that for people living near sites, fracking can have severe health affects such as respiratory illnesses and cancer. Another reason fracking sucks: Study links fracking to even more health problems. You know the old saying: “Another day, another study linking fracking to health problems.” 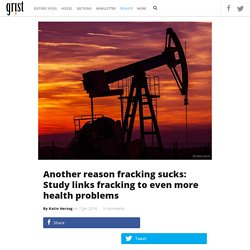 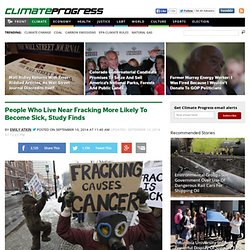 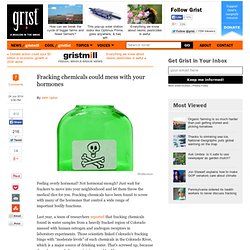 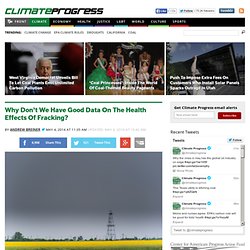 " CREDIT: Calin Tatu/Shutterstock This week the Colorado Senate Appropriations Committee defeated a bill that would have commissioned a study on the health effects of hydraulic fracturing, or fracking, in the state’s Front Range. It was the second time Representative Joann Ginal (D-Front Range) had unsuccessfully proposed a study looking at fracking’s health effects, but she indicated she’ll be bringing it up again next year. What happens to Fido when fracking comes to town? Fracking can ruin a lot of things: landscapes, rivers, ecosystems, the climate, your health and safety and that of your family. 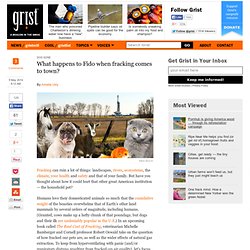 But have you thought about how it could hurt that other great American institution — the household pet? Humans love their domesticated animals so much that the cumulative weight of the beasties overwhelms that of Earth’s other land mammals by several orders of magnitude, including humans. (Granted, cows make up a hefty chunk of that poundage, but dogs and their ilk are undeniably popular in the U.S.) Public Accountability Initiative. How a University of Texas Fracking Study Led by a Gas Industry Insider Spun the Facts and Misled the Public PAI continues to investigate fracking industry influence on academic research with this report on a University of Texas study of fracking that claimed that the drilling practice had never been linked to groundwater contamination. 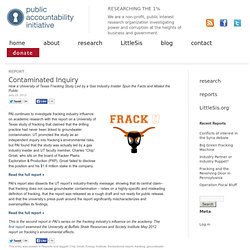 UT promoted the study as an independent inquiry into fracking’s environmental risks, but PAI found that the study was actually led by a gas industry insider and UT faculty member, Charles “Chip” Groat, who sits on the board of fracker Plains Exploration & Production (PXP). Groat failed to disclose this position and his $1.6 million stake in the company. Read the full report » Newborn Birth Weight Drops In High Fracking Areas. Hydraulic fracturing has been linked to everything from flammable drinking water to earthquakes. 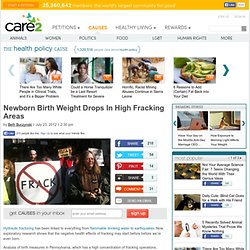 Now, exploratory research shows that the negative health effects of fracking may start before before we’re even born. Analysis of birth measures in Pennsylvania, which has a high concentration of fracking operations, revealed that mothers exposed to this dangerous method of natural gas extraction are 25 percent more likely to deliver an underweight baby. Low birth weight or premature babies experience increased risk for learning difficulties, vision difficulties, chronic respiratory problems like asthma, and cerebral palsy.

On average, a low birth-weight baby can cost an additional $51,000 before its first birthday, not includinjg long-term costs for the child or decrease in parental earnings. The study, “Unconventional Natural Gas Development and Infant Health: Evidence from Pennsylvania,” was conducted by Cornell doctoral candidate Elaine L. Related Reading: Fracking could be bad for babies. Delegates at the annual get-together of the American Economic Association were presented with troubling data on Saturday that suggests Pennsylvania’s fracking boom is putting its youngest residents at risk. Bloomberg explains: [R]esearchers … looked at Pennsylvania birth records from 2004 to 2011 to assess the health of infants born within a 2.5-kilometer radius of natural-gas fracking sites. They found that proximity to fracking increased the likelihood of low birth weight by more than half, from about 5.6 percent to more than 9 percent.

The chances of a low Apgar score, a summary measure of the health of newborn children, roughly doubled, to more than 5 percent. …Surprisingly, water contamination does not appear to be the culprit: The researchers found similar results for mothers who had access to regularly monitored public water systems and mothers who relied on the kind of private wells that fracking is most likely to affect.

Is fracking pollution deforming babies? When frackers operate, they produce pollution that’s been linked to birth defects — volatile organic compounds, benzene, nitrogen oxides, and polycyclic aromatic hydrocarbons, among other nasties. And now new research has found higher incidences of birth defects in babies born near some fracking areas. The Colorado School of Public Health funded research by university and state scientists that looked for any correlations between fracking operations and nearby rates of congenital heart defects, neural tube defects, and oral clefts.

The researchers analyzed 124,842 births between 1996 and 2009 in rural Colorado and compared them with locations of known fracking wells. The results, published late last month by the National Institute of Environmental Health Sciences, suggest that being pregnant near a fracking site is a bad idea. Fracking's Toxic Impact on Texans. Written by Kerry Trueman The Lone Star State’s ruthless energy industry is leading a toothless government agency in a merciless stomp on the windpipes of rural Texans. Thanks to an eight month-long investigation by the mighty multimedia trio InsideClimate News, the Center for Public Integrity and The Weather Channel, we now know that a massive but relatively obscure (until now) fracking operation to extract oil and gas from the Eagle Ford Shale is spewing an alarming cocktail of contaminants into the air and the lungs of rural Texans while government agencies stand idly by, unable or unwilling to intervene.

The report documents one instance after another in which residents suffered significant health problems and found their homes rendered nearly uninhabitable by the noxious fumes. All these concerns are routinely dismissed by the energy companies as aberrations or exaggerations from anti-oil agitators. Here's What Fracking Can Do to Your Health. If you know one thing about fracking, it might be that the wells have been linked to explosive tap water. Of course, a tendency toward combustion isn't the biggest problem with gas-infused water; it's what could happen to you when you drink it. Although the natural gas industry is notoriously tight-lipped about the ingredients of the chemical cocktails that get pumped down into wells, by now it's widely known that the list often includes some pretty scary, dangerous stuff, including hydrochloric acid and ethylene glycol (a.k.a. antifreeze).

It's also no secret that well sites release hazardous gases like methane and benzene (a carcinogen) into the atmosphere. So just how dangerous are fracking and other natural gas extraction processes for your health (not counting, for the sake of argument, explosions and earthquakes)? Is it true, as an activist-art campaign by Yoko Ono recently posited, that "fracking kills"? Still, how exactly could gas drilling make you ill?