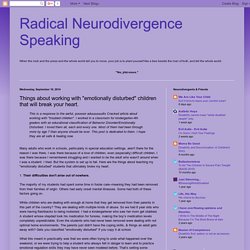 I worked in a classroom for kindergarten-4th graders with an educational classification of Behavior Disorder/Emotionally Disturbed. I loved them all, each and every one. Most of them had been through more by age 7 than anyone should be ever. This post is dedicated to them. I hope they are all safe & healing now. Many adults who work in schools, particularly in special education settings, aren't there for the reason I was there. 1. The majority of my students had spent some time in foster care--meaning they had been removed from their families of origin. White children who are dealing with enough at home that they get removed from their parents in this part of the country? 2. The systems set up in these classrooms tend to run on "points" or "tokens" and they lose tokens for Behaviors. I have seen adults, multiple adults, gleefully tell students how many points they're losing. 3.

Say it with me: Child abuse is never love … never. Everything we need to know about how and why Adrian Peterson could and did deliver a savage beating to his 4-year-old son is summed up in the words of Peterson’s lawyer, Rusty Hardin: “Adrian is a loving father who used his judgment as a parent to discipline his son. … He used the same kind of discipline with his child that he experienced as a child growing up in East Texas. 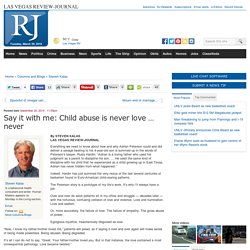 Adrian has never hidden from what happened.” Indeed. Hardin has just summed the very nexus of the last several centuries of barbarism found in Euro-American child-rearing patterns. The Peterson story is a prototype of my life’s work. It’s why I’ll always have a job. Over and over do adult patients sit in my office and struggle — decades later — with the torturous, confusing collision of love and violence.

Or, more accurately, the failure of love. Egregious injustice, treacherously disguised as love. It’s all I can do not to say, “Great. That. Child abuse statistics – Get the facts of Child abuse and neglect. How Are We Really Doing? 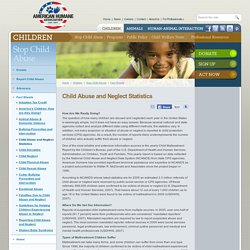 The question of how many children are abused and neglected each year in the United States is seemingly simple, but it does not have an easy answer. Because several national and state agencies collect and analyze different data using different methods, the statistics vary. In addition, not every suspicion or situation of abuse or neglect is reported to child protection services (CPS) agencies. As a result, the number of reports likely underrepresents the number of children who actually suffer from abuse or neglect.

One of the most reliable and extensive information sources is the yearly Child Maltreatment Report by the Children’s Bureau, part of the U.S. 7 Harmful Ways Parents Often Wield Adultism Against Their Kids. In the aftermath of my article on children’s rights to consensual hugging, wherein I posited that no kid should be forced to hug someone when they don’t want to, there was quite a divide from readers as to whether or not I was the Devil. 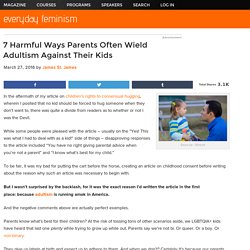 While some people were pleased with the article – usually on the “Yes! This was what I had to deal with as a kid!” Side of things – disapproving responses to the article included “You have no right giving parental advice when you’re not a parent” and “I know what’s best for my child.” To be fair, it was my bad for putting the cart before the horse, creating an article on childhood consent before writing about the reason why such an article was necessary to begin with. But I wasn’t surprised by the backlash, for it was the exact reason I’d written the article in the first place: because adultism is running amok in America. And the negative comments above are actually perfect examples.

I Don't Like My Child - A Mother Struggles With Her Child's Growth Hormone Deficiency. My friend consoled me but didn't let me off the hook. 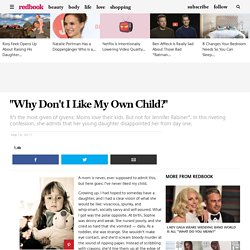 "What are you going to do about this? " she asked. I honestly didn't know. Then, a few days later, we got a flyer from Sophie's preschool. It advertised a workshop by a clinical psychologist called "Loving and Honoring the Child You Have, Not the One You Wish You Had. " Has uneven skills (as a toddler, she knew the whole alphabet and could count to 60, but could barely string three words together).Hurts herself, perhaps out of anxiety (used to tear out clumps of hair, then began scratching herself).Doesn't express needs or even recognize them (will cry when hungry even as her peers use full sentences).Freaks out at high-pitched noises (like the beeping of an ATM).Prefers to play alone (when other kids try to play with her, she ignores them, or tries to play but doesn't seem to grasp how). Still, denying my expectations day after day was hard.