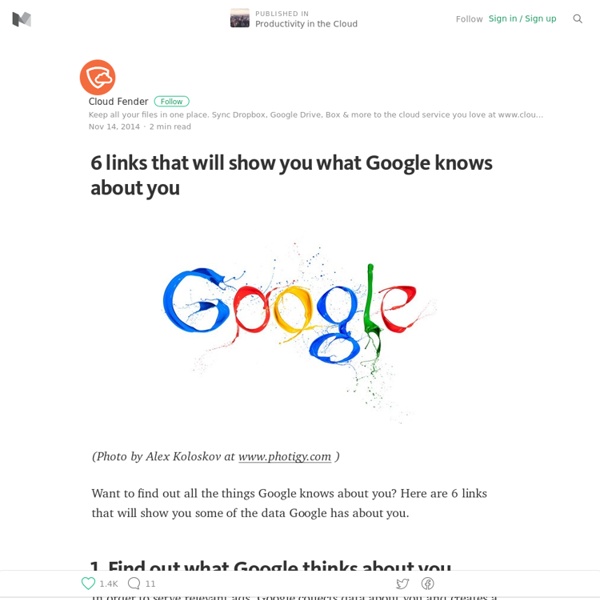 6 links that will show you what Google knows about you (Photo by Alex Koloskov at www.photigy.com ) Want to find out all the things Google knows about you? Here are 6 links that will show you some of the data Google has about you. 1. Find out what Google thinks about you In order to serve relevant ads, Google collects data about you and creates a profile. Google also has a tool called Google Analytics, that helps publishers see what pages you have viewed on their website, how many times you have visited it, how long did you stay etc. 2. If you use Android, your mobile device may be sending your location to Google. 3. Google saves every single search you have ever done. 4. Google offers an Account activity page that tells you about all the Google services you are using. 5. The Account activity page also offers a list of all the apps that have any type of access to your data. 6. Google also keeps a history of your YouTube searches. Source:

ASCII Characters By Keyboard A first stab at reproducing Jennifer Kyrnin's massive HTML Special Characterset Guide was added 13 May 2013. (13 May 2013) How to create alternate characters, such as foreign characters, those with diacritical (accent) marks, symbols, etc. [Numbers MUST be keyed on the Numeric Keypad, NOT on the top line of the keyboard.] This listing does not begin to be exact; different platforms and servers handle these codes differently.

stumbleupon There are several options when it comes to backing up a WordPress site. Depending on the type of access you have, retrieving the database or an XML backup is easy. But what if you don’t have access to the database or the backend? Consider the following scenario presented on the WordPress subreddit: A relative who used WordPress recently passed away and you have no way to access the backend of their site.

Emotion regulation, procrastination, and watching cat videos online: Who watches Internet cats, why, and to what effect? Highlights A survey of nearly 7000 Internet users tested associations between personality traits, past behavior, and viewing cat-related media online. The study also examined Internet users’ motivations for consuming cat-related content, including emotion regulation and procrastination. Additionally, it explored effects of Internet cat consumption on emotional states and enjoyment of this type of digital media. 12 Lesser-Known Google Projects That Are Amazing Google revolutionized the Internet by making the global brain easily searchable by anyone. In addition to search, Google has created all kinds of different tools like Google Maps, Gmail, Analytics, Android and Apps that many of us use everyday. One of the reasons why Google has consistently released new innovative project is because of their 20% time policy, which gives many of their employees one day a week to experiment with new concepts and ideas.

Top 10 Android Apps Everyone Should Install First The Google Play Store and its plethora of options can be overwhelming for anyone. So instead of blindly downloading a crazy number of apps, let’s concentrate on the essential apps you need to get. Let’s not get into the Facebook vs. stumbleupon Google Scripts offer programmatic access to most Google products including Gmail, Google Docs, Google Drive, Analytics, Google Contacts, Calendar, Maps and Google Analytics. The Google scripts are written in regular JavaScript language and they are hosted on Google’s servers. Here’s an always-updated collection of Google Scripts that will help you do more with your favorite Google products. And you don’t have to be programmer to use any of these scripts.

Meet Cody Wilson, creator of the 3D-gun, anarchist, libertarian Having lunch with the 14th Most Dangerous Person in the World is less scary than you might think. Unless you happen to have a morbid fear of hipster beards, Cody Wilson, a good-looking 26-year-old who blends with the crowd in the east London cafe where I meet him, doesn't immediately strike fear into the heart. He chats away with the waitress, discussing the possibilities before ordering east London's hippest sandwich – the pulled pork burger – and has an easygoing, amiable manner.

A Brief History of Blogging Blogs have become an integral part of online culture. Practically everyone reads blogs now, whether they’re “official” news blogs associated with traditional news media, topic-based blogs related to one’s work or hobbies, or blogs purely for entertainment, just about anyone you ask has at least one favorite blog. But it wasn’t always so.

Brooks Falls - Katmai National Park, Alaska - Bears This website would like to remind you: Your browser (Firefox 17) is out of date. Update your browser for more security, comfort and the best experience on this site. bears | brooks falls - katmai national park, alaska Snapshots Close CleanSoftware.org - Security, antivirus and antispam software This software is believed to be free from nasties: adware, spyware, harmful/intrusive components, and threats to privacy. There are no sponsored entries. See home page for listing criteria. The Organized Mind: How to better structure our time in the age of social media and constant distraction. The information age is drowning us in a deluge of data, and it is becoming increasingly difficult to separate facts from pseudo-facts, objective from biased sources, and at the same time, we’re all being asked to do more at home and at work. Daniel Levitin reviews the cognitive neuroscience of attention and memory, presents the differences between mind-wandering mode and task-focused mode and offers advice for how to boost creativity and limit exhausting brain-shifting distractions. The human brain evolved to focus on one thing at a time.