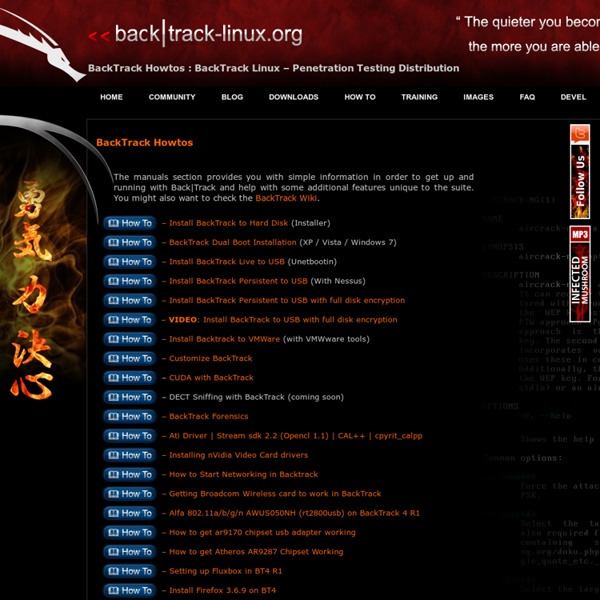 Project Frenzy - FreeBSD-based LiveCD Nmap Nmap (“Network Mapper”) is an open source tool for network exploration and security auditing. It was designed to rapidly scan large networks, although it works fine against single hosts. Nmap uses raw IP packets in novel ways to determine what hosts are available on the network, what services (application name and version) those hosts are offering, what operating systems (and OS versions) they are running, what type of packet filters/firewalls are in use, and dozens of other characteristics. While Nmap is commonly used for security audits, many systems and network administrators find it useful for routine tasks such as network inventory, managing service upgrade schedules, and monitoring host or service uptime. The output from Nmap is a list of scanned targets, with supplemental information on each depending on the options used. A typical Nmap scan is shown in Example 15.1. Example 15.1. The newest version of Nmap can be obtained from

Netragard’s Hacker Interface Device (HID). | Netragard's SNOsoft Research Team We (Netragard) recently completed an engagement for a client with a rather restricted scope. The scope included a single IP address bound to a firewall that offered no services what so ever. It also excluded the use of social attack vectors based on social networks, telephone, or email and disallowed any physical access to the campus and surrounding areas. With all of these limitations in place, we were tasked with penetrating into the network from the perspective of a remote threat, and succeeded. The first method of attack that people might think of when faced with a challenge like this is the use of the traditional autorun malware on a USB stick. Just mail a bunch of sticks to different people within the target company and wait for someone to plug it in; when they do its game over, they’re infected. Enter PRION, the evil HID. A prion is an infectious agent composed of a protein in a misfolded form. With the mouse and the USB board prepared we began the process of soldering.

DEFT Linux - Computer Forensics live cd Justin Ribeiro / How to use Perl, Tor, and cURL to game an IP check voting engine 10 Jul 2009 Every once in a while I like to spend some time looking at a problem that isn't even a problem. Maybe it's a proof of concept, maybe it's something that just vastly has the potential to be something more. Other times, maybe I just want to game the system just because I can. I can have fun too. Gaming online voting has been around since the invention of online voting. The site in question (which shall remain nameless) had some 50 candidates (ideas one might call them) that could receive votes. Time to load up Tor. To test my IP address restriction theory, I ran Tor, submitted vote again, and it worked. I set this up on Linux. . Since we can now change our identity at will, lets work on the POST. curl -s --socks4a localhost:9050 -e {YOUR_REFERER} -d '{POST_VARS}' -A '{USER_AGENT}' {TARGET_SCRIPT} What exactly is that piece of command line gold doing? This simple command will submit a single vote to a target and return what ever the target script has to offer. I like Perl a lot.

Hacking Illustrated: Computer security videos Phreaknic 12 (2008) Hacker Con This is a quick and dirty video documentary of the things that when on around the talks and event at Phreaknic 12 (2008). Don't watch if you get sick at shaky cam movies like Blair Witch or Cloverfield. Intro and leaving Louisville with Brian. HackQuest :: Learn about Hacking, Cracking, JavaScript, PHP, Cryptology and Password security AntiSec and Anonymous: Is Law Enforcement Barking up the Wrong Tree? Image Credit: AnonOps Following a series of high end hacks against US authorities, analysts have come to question whether law enforcement can ever really deal with the Anonymous collective. The debate re-emerged on 3 January after Anonymous posted a link to an MP3 recording of a conference call between the FBI and Scotland Yard. The call chronicled a conversation between the FBI and British authorities discussing the two's ongoing LulzSec and Anonymous investigations. The fact that the majority of the call was spent with each agency sharing the information it had - not all of which was uniform in what it was saying - demonstrated the problem facing law enforcement agencies hunting for Anonymous members. How Deep Does the Rabbit Warren Run? Operating off an open IRC channel, the collective allows any user to join and become a member, or "Anon" as they tend to refer to themselves. Chasing the Wrong Bunny Specifically, Sullivan cited an exchange between Sabu and Weev as proof of his theory.