Remember Any Number With the Major Memory System 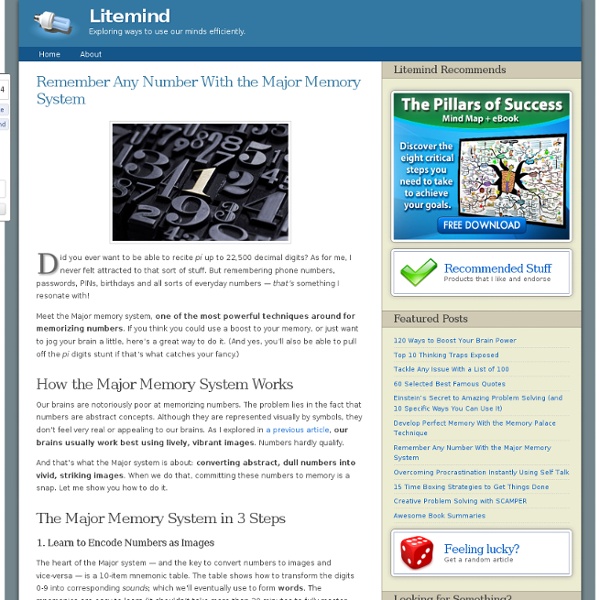 Did you ever want to be able to recite pi up to 22,500 decimal digits? As for me, I never felt attracted to that sort of stuff. But remembering phone numbers, passwords, PINs, birthdays and all sorts of everyday numbers — that’s something I resonate with! Meet the Major memory system, one of the most powerful techniques around for memorizing numbers. If you think you could use a boost to your memory, or just want to jog your brain a little, here’s a great way to do it. (And yes, you’ll also be able to pull off the pi digits stunt if that’s what catches your fancy.) How the Major Memory System Works Our brains are notoriously poor at memorizing numbers. And that’s what the Major system is about: converting abstract, dull numbers into vivid, striking images. The Major Memory System in 3 Steps 1. The heart of the Major system — and the key to convert numbers to images and vice-versa — is a 10-item mnemonic table. As an example, let’s take the (in)famous number 42. 2. Now for the fun part. 3.

Remembering Numbers - The Phonetic Number System to Easily Memorize Numbers Remembering numbers is hard. But if you want to build a great memory, you need a way to memorize them. Fortunately, there is a memory trick you can use for long numbers. Why is remembering numbers important? If the presentation includes sales figures and statistics, would you rather shuffle through papers or amaze everyone by spitting out the numbers from memory? That's just one example, but if you need to remember passwords, phone extensions, mathematical constants, street addresses, product codes, Bible verses, or anything else numeric, then invest some time learning the Phonetic Number system. Phonetic Number System The Phonetic Number system is a substitute alphabet for changing numbers to letters. For example, if I asked you to memorize the phrase, "Four score and seven years ago", you could easily do it. Now try memorizing the 30-digit number "8567 13543 887 54365 23678 369". Number to Letter Conversion Here is the conversion table. One more point. How to Use the Method

The Major System Peg Words One of the really poweful uses of the Major System is as a sort of memory pegboard. As part of your Major System, you create a list of 100 peg words that can then be used as memory hooks to 'hang' anything on. As with virtually all memory work, it works by association. In other words, once you're familiar with your peg words (really familiar, that is!), they become incredibly useful to you, because you can then associate things with the pegs, just as though you're hanging them on memory hooks on a pegboard. And because you know where the memory hooks are, the items are easy to find! Oh, and did I mention that the hooks are all numbered? Since you're going to create little mental images (or mental videos) of these things, that's what they should be ... things! I'm giving you a list of 100 memory peg words that conform to the 100 numbers from zero to ninety-nine, but you don't have to use them. How to create good peg words head, and playing a lute or some such instrument.

Mnemonic major system The Major System (also called the phonetic number system, phonetic mnemonic system, or Herigone's mnemonic system) is a mnemonic technique used to aid in memorizing numbers. The system works by converting numbers into consonant sounds, then into words by adding vowels. The system works on the principle that images can be remembered more easily than numbers. The system[edit] Each numeral is associated with one or more consonants. The groups of similar sounds and the rules for applying the mappings are almost always fixed, but other hooks and mappings can be used as long as the person using the system can remember them and apply them consistently. Each numeral maps to a set of similar sounds with similar mouth and tongue positions. For most people it would be easier to remember 3.1415927 (an approximation of the mathematical constant pi) as: Short term visual memory of imagined scenes allows large numbers of digits to be memorized with ease, though usually only for a short time. History[edit]