How to manage all your financial affairs from a $20 mobile phone - Quartz. “I feel like a caveman who’s just been handed a Bic lighter,” reported Charles Graeber, a writer for Bloomberg Businessweek who recently went to Nairobi to check out M-Pesa, Kenya’s dominant mobile-money provider. 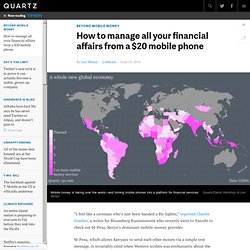 M-Pesa, which allows Kenyans to send each other money via a simple text message, is invariably cited when Western scribes wax enthusiastic about the miracle of mobile money in the developing world. And it may well seem miraculous to Americans, considering that when they want to send money to a friend, they still typically rely on hand-writing and then mailing a check (how quaint!) —whose recipient, if very technologically advanced, might use a smartphone app to take a photograph and upload it instead of going to the bank. But Kenyans have already been using mobile money for seven years. Mobile as a platform Kenya isn’t even the leader in mobile money any more. Tanzania already has more people conducting more mobile money transactions than Kenya. How to spend it… …Or to save it. Kenya’s telecom revolution and the impact of mobile money. Our third “Kenya Economic Update” – Kenya at the Tipping Point? 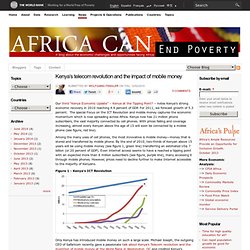 – notes Kenya’s strong economic recovery in 2010 reaching 4.9 percent of GDP. For 2011, we forecast growth of 5.3 percent. The special Focus on the ICT Revolution and mobile money captures the economic momentum which is now spreading across Africa. Kenya now has 21 million phone subscribers, the vast majority connected by cell phones. With prices falling and coverage increasing, almost every Kenyan above the age of 15 will soon be connected by a mobile phone (see figure, red line). 10 facts about technology use in the emerging world. The Pew Research Center surveyed thousands of people across 32 emerging and developing nations about their technology use and how the rising influence of the internet affects their daily lives. 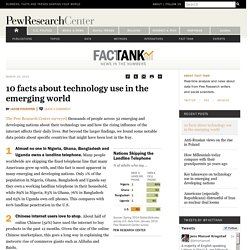 But beyond the larger findings, we found some notable data points about specific countries that might have been lost in the fray. 1Almost no one in Nigeria, Ghana, Bangladesh and Uganda owns a landline telephone. Many people worldwide are skipping the fixed telephone line that many Americans grew up with, and this fact is most apparent in many emerging and developing nations. Once Forbidden Frontier Markets. Once Forbidden Frontier Markets by Mark Mobius, Franklin Templeton Investments Investing in frontier markets can come with a higher degree of volatility than more established markets, but to my team and me, they offer exciting potential. 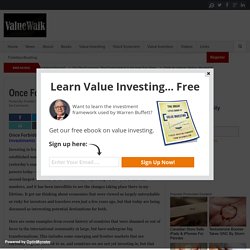 Some of yesterday’s small, agrarian economies have transformed themselves into global powers today—China being the most impressive example. China represents the second-largest economy in the world today, depending on how you crunch the numbers, and it has been incredible to see the changes taking place there in my lifetime. Facebook_s_internet_org_releases_its_state_of_global_connectivity_report. Graphic from Facebook As the net neutrality debate rages on, it's easy to forget that there are people who have never experienced the injustice of an endlessly buffering Netflix movie. 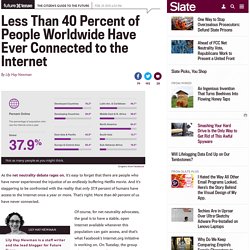 And it's staggering to be confronted with the reality that only 37.9 percent of humans have access to the Internet once a year or more. That's right: More than 60 percent of us have never connected. Lily Hay Newman is a staff writer and the lead blogger for Future Tense. Of course, for net neutrality advocates, the goal is to have a stable, open Internet available whenever this population can gain access, and that's what Facebook's Internet.org initiative is working on. How Mobile Phone Data Reveals Food Consumption Patterns in Central Africa. An increasingly important side-effect of the mobile phone revolution is that the big data it generates has become a high-resolution microscope for examining the nature of society. 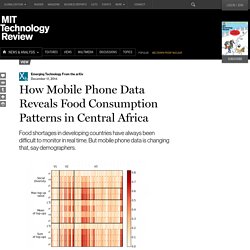 Various teams have shown how mobile phone data reveals patterns of commuting, criminal activity and even human reproductive strategies. Now Adeline Decuyper at the Université catholique de Louvain in Belgium, and a few pals, say they have used mobile phone usage patterns in a Central African country to determine food consumption patterns. They say the work suggests that mobile phone data could be a valuable tool for monitoring food security in low and middle-income countries. Decuyper and co began with two datasets. The first is a ground truth survey of food consumption among 7500 households in a Central African country throughout 2012, carried out by the World Food Programme. The second dataset is a record of all calls for a significant portion of the population from one large mobile phone carrier. Financial Inclusion Data - World Bank. Pp072012.pdf. 041612b.pdf. GSMA Intelligence — Topics — Mobile Money for the Unbanked. It is estimated that 2.5 billion people in lower to middle income countries are unbanked. 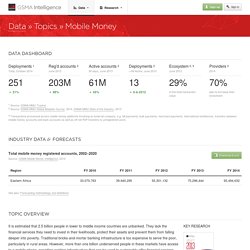 They lack the financial services they need to invest in their livelihoods, protect their assets and prevent them from falling deeper into poverty. Traditional bricks-and-mortar banking infrastructure is too expensive to serve the poor, particularly in rural areas. However, more than one billion underserved people in these markets have access to a mobile phone, providing existing infrastructure that can be used to sustainably offer financial services such as payments, transfers, insurance, savings and credit. The GSMA’s Mobile Money for the Unbanked (MMU) programme accelerates the growth of commercially-viable mobile money services to achieve greater financial inclusion. The MMU programme is focused on providing convenient and affordable financial services to the underserved by supporting mobile money services to reach scale. Learn more » Diaspora Remittances.