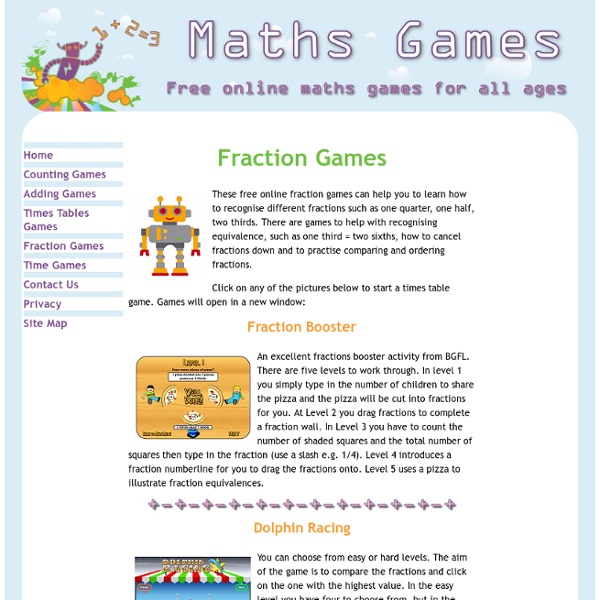 Educational Games Have fun playing our collection of games and interactives! Be sure to sign in to save your scores and compete in our leaderboards! All Games & Interactives Addend ArrestNumber Operations, Problem Solving Find the 10 most wanted missing addends before time runs out. Practice problem solving skills by completing the equation for the missing addend. Using Google Apps in a Math Classroom This week I am hosting some guest bloggers. This is a guest post from Bethany Mager. I have been teaching high school math for 12 years and I currently work to help teachers integrate technology in our 1:1 high school using Google Apps. I often find that math teachers are reluctant to use Google Docs in a math classroom, but Google Apps has completely transformed the way I teach. I will share some of my best practices and tips to get you started. Collaborative Challenge Problems The best part of using Google in the classroom is having students collaborate with each other on a document.

21 GIFs That Explain Mathematical Concepts “Let's face it; by and large math is not easy, but that's what makes it so rewarding when you conquer a problem, and reach new heights of understanding.” Danica McKellar As we usher in the start of a new school year, it’s time to hit the ground running in your classes! How to Find and Apply The Slope of a Line In this lesson, we'll discover all about the slopes of lines. We'll learn about different types of slopes and how to find the slopes of lines. We'll use two methods: the slope formula and the slope-intercept form. Explore our library of over 10,000 lessons Click "next lesson" whenever you finish a lesson and quiz. Got It

January 22, 2016 In today's post, we have curated for you some of the best Math apps for middle school students. We included apps for both Android and iPad. The apps cover different mathematical skills and will definitely help students enhance their math learning and consequently perform better. Check them out and as always share with us if you have other suggestions to add to the list. iPad Math Apps for Middle Schoolers Space group The space group of hexagonal H2O ice is P63/mmc. The first m indicates the mirror plane perpendicular to the c-axis (a), the second m indicates the mirror planes parallel to the c-axis (b) and the c indicates the glide planes (b) and (c). The black boxes outline the unit cell. In crystallography, space groups are also called the crystallographic or Fedorov groups, and represent a description of the symmetry of the crystal. A definitive source regarding 3-dimensional space groups is the International Tables for Crystallography (Hahn (2002)). History[edit]

What Does E=mc2 Truly Mean? What does E=mc2, the most famous equation in history, mean? (Image Credit: PBS Space Time) Albert Einstein remains one of the greatest minds in history. Three-Dimensional Shapes This page examines the properties of three-dimensional or ‘solid’ shapes. A two-dimensional shape has length and width. A three-dimensional solid shape also has depth. Three-dimensional shapes, by their nature, have an inside and an outside, separated by a surface. All physical items, things you can touch, are three-dimensional. This page covers both straight-sided solids called polyhedrons, which are based on polygons, and solids with curves, such as globes, cylinders and cones.

Gravitational waves – your questions answered The final piece of Einstein's general theory of relativity, which has stubbornly evaded detection since his predictions a century ago, has been detected. Scientists announced today at a press conference they’ve successfully picked up gravitational waves, formed during the cataclysmic collision and fusion of two mammoth black holes 1.3 billion light-years away. Not only does this confirm Einstein’s predictions, it gives astronomers a new method of “seeing” the Universe. Nailing down gravitational waves – ripples through the fabric of space-time – has not been an easy task.

Names of Geometric Shapes—With Pictures Most children know the names of basic two-dimensional shapes before they enter school. Squares, triangles, circles, and ovals are easy for young children to recognize and draw, even if their other math skills are still developing. As they get older, they can discern more differences among shapes and start to learn more precise words for the wide variety of geometric objects they encounter in life. Soon, they begin to learn names of three-dimensional figures like cubes, cones, cylinders, spheres, and more.

Hare and Hounds Puzzle Hare and Hounds On each turn, a single hound moves to a directly connected empty square, followed by the hare's similar move. The hounds may only move vertically or forward (to the right), not backward. The hare may move in any direction. There are no captures. The hounds win by trapping the hare so that he is unable to move.

Related:
Related:  Numbers and Equations   -  matematica   -  Major system for remembering numbers   -  Numbers 1-20   -  Numbers | Data   -  Unit 5 - Systems of Equations   -  Math, Numbers, Data, etc   -  Convert just about anything to anything else   -  Remember Any Number With the Major Memory System - Litemind   -  Mnemonics and memory improvement / Pegging and memory   -  Memorize numbers with this online mnemonic generator - Rememberg.com   -  Mnemonic major system - Wikipedia, the free encyclopedia   -  Nassim Haramein - Sacred Geometry and Unified Fields - YouTube   -  10 Websites to Create Your Very Own Avatar   -  Probability and statistics   -  Omega432™ » The Importance of 432Hz Music   -  Arthur Benjamin: The magic of Fibonacci numbers   -  53+ Free Image Sources For Your Blog and Social Media Posts   -  21 GIFs That Explain Mathematical Concepts   -  8 Creative Uses of Google Drawings You Shouldn't Ignore   -  The 37 Best Websites To Learn Something New — Life Learning   -  12 Useful Websites to Improve Your Writing   -  6 links that will show you what Google knows about you — Productivity in the Cloud   -  21 GIFs That Explain Mathematical Concepts