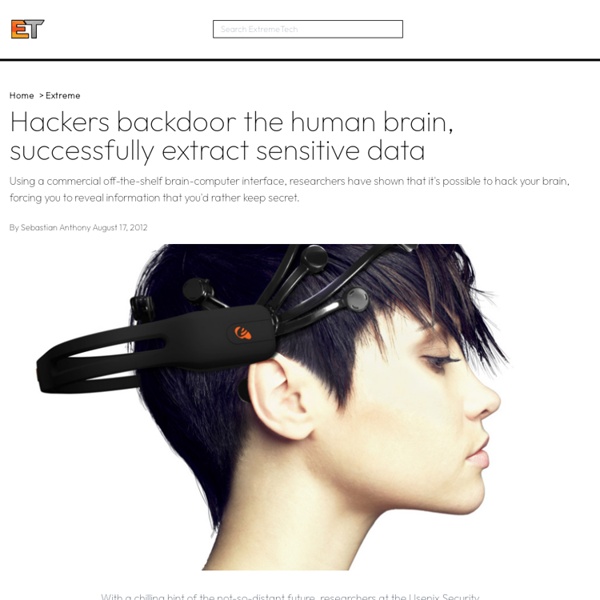 With a chilling hint of the not-so-distant future, researchers at the Usenix Security conference have demonstrated a zero-day vulnerability in your brain. Using a commercial off-the-shelf brain-computer interface, the researchers have shown that it’s possible to hack your brain, forcing you to reveal information that you’d rather keep secret. As we’ve covered in the past, a brain-computer interface is a two-part device: There’s the hardware — which is usually a headset (an EEG; an electroencephalograph) with sensors that rest on your scalp — and software, which processes your brain activity and tries to work out what you’re trying to do (turn left, double click, open box, etc.) BCIs are generally used in a medical setting with very expensive equipment, but in the last few years cheaper, commercial offerings have emerged. For $200-300, you can buy an Emotiv (pictured above) or Neurosky BCI, go through a short training process, and begin mind controlling your computer.

MIT creates glucose fuel cell to power implanted brain-computer interfaces Neuroengineers at MIT have created a implantable fuel cell that generates electricity from the glucose present in the cerebrospinal fluid that flows around your brain and spinal cord. In theory, this fuel cell could eventually drive low-power sensors and computers that decode your brain activity to interface with prosthetic limbs. The glucose-powered fuel cell is crafted out of silicon and platinum, using standard semiconductor fabrication processes. The platinum acts as a catalyst, stripping electrons from glucose molecules, similar to how aerobic animal cells (such as our own) strip electrons from glucose with enzymes and oxygen. Can You Make Money With Your Idea or Invention? Innovative ideas are essential to business progress. It is very difficult, however, for innovators to get the kind of financial and management support they need to realize their ideas. This publication, aimed at idea people, inventors, and innovative owner-managers of small companies, describes the tests every idea must pass before it makes money. You've Got an Idea?

Breakthrough in Augmented Reality Contact Lens December 6, 2012 LCD lens. Credit: Image courtesy of Ghent University The Centre of Microsystems Technology (CMST), imec’s associated laboratory at Ghent University (Belgium), has developed an innovative spherical curved LCD display, which can be embedded in contact lenses. The first step toward fully pixilated contact lens displays, this achievement has potential wide-spread applications in medical and cosmetic domains. Unlike LED-based contact lens displays, which are limited to a few small pixels, imec’s innovative LCD-based technology permits the use of the entire display surface. A bionic prosthetic eye that speaks the language of your brain On the grand scale of things, we know so very little about the brain. Our thick-headedness isn’t quite cosmological in scale — we really do know almost nothing about the universe beyond Earth — but, when it comes down to it, the brain is virtually a black box. We know that stimuli goes in, usually through one of our senses, and motor neurons come out, but that’s about it. One thing you can do with a black box, however, is derive some semblance of a working model through brute force testing. Take prosthetic arms, for example: We don’t have a clue about the calculations that occur in the brain to trigger arm muscle motor neurons, but that doesn’t stop us from slapping some electrodes onto a subject’s bicep muscles and measuring the electric pulses that occur when you tell him to “think about moving your arm.”

Cyc The project was started in 1984 by Douglas Lenat at MCC and is developed by the Cycorp company. Parts of the project are released as OpenCyc, which provides an API, RDF endpoint, and data dump under an open source license. Overview[edit] The project was started in 1984 as part of Microelectronics and Computer Technology Corporation. Apple Patents Rotary iPhone Follow Techdirt Techdirt's Daily Email Newsletter A word from our sponsors... Essential Reading Cyberpunk Studies Rollerphone – Concept Braclet Phone by Alexey Chugunnikov Super Sexy Roll Say hello to the Rollerphone concept! At first glance it’s merely a wrist band that projects time, much like the Alessi Concept we saw earlier, but then you realize it’s actually a phone with a retractable transparent screen at the base.

Over 100 Incredible Infographic Tools and Resources (Categorized) This post is #6 in DailyTekk’s famous Top 100 series which explores the best startups, gadgets, apps, websites and services in a given category. Total items listed: 112. Time to compile: 8+ hours. Follow @DailyTekk on Twitter to make sure you don’t miss a week! Update: Be sure to check out our latest post on infographics: Infographics Are Everywhere – Here’s How to Make Yours Go Viral. I love a good infographic!

5.- How Remote Viewing And Remote Influencing Are Taught 5.- How Remote Viewing And Remote Influencing Are Taught We have seen the amount of time and money which the Soviets and the Americans have invested regarding the techniques of remote viewing and remote influencing. How are these techniques actually taught to operatives. This section of the book provides a complete guide to learning remote viewing. Top 5 Exotic Free Energy Technologies From PESWiki Shortcut URL: See also News:Best Exotic Free Energy Technologiesand Tracking the Position of the Top 5and Directory:Best Exotic Clean Energy Technologies This page is devoted to featuring the top five exotic technologies that we know of that are closest to market. Here at PESWiki we cover the entire spectrum of clean energy technologies, from conventional methods such as solar, wind, geothermal, tide, wave, river on the one hand; to very unconventional or "exotic" technologies such as cold fusion, magnet motors, overunity electromagnetic motors, gravity motors, and vortex technologies on the other. There are many ways to harness the wheelwork of nature -- energy sources that the environment provides free for the taking -- that are not only clean but inexhaustible and ubiquitous.

Microchip implant (human) The hand of microchip implant hobbyist Amal Graafstra, just after an operation to insert an RFID tag. The yellow coloration comes from iodine used to disinfect the hand for surgery. A human microchip implant is an identifying integrated circuit device or RFID transponder encased in silicate glass and implanted in the body of a human being.