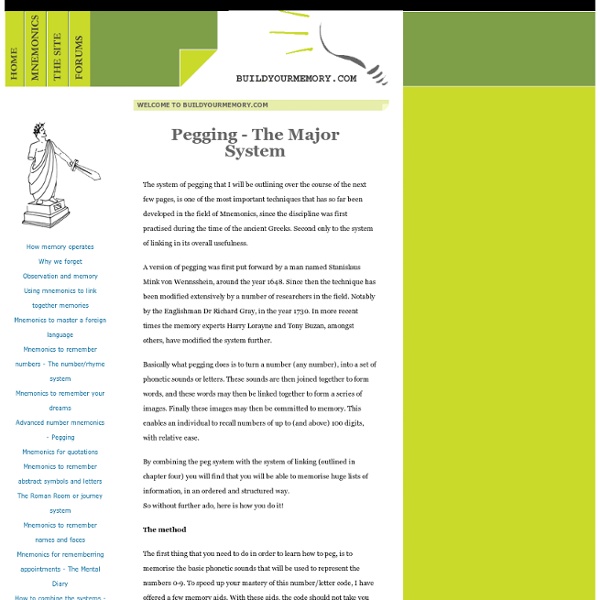 Remember Any Number With the Major Memory System Did you ever want to be able to recite pi up to 22,500 decimal digits? As for me, I never felt attracted to that sort of stuff. But remembering phone numbers, passwords, PINs, birthdays and all sorts of everyday numbers — that’s something I resonate with! Meet the Major memory system, one of the most powerful techniques around for memorizing numbers. How the Major Memory System Works Our brains are notoriously poor at memorizing numbers. And that’s what the Major system is about: converting abstract, dull numbers into vivid, striking images. The Major Memory System in 3 Steps 1. The heart of the Major system — and the key to convert numbers to images and vice-versa — is a 10-item mnemonic table. As an example, let’s take the (in)famous number 42. According to the mnemonic table, the digits in the number 42 translate to r and n respectively. 42 gets encoded as rain, then. Decoding from word to number is even more straightforward. There are just a couple more notes to bear in mind: 2. 3. 0.

Improve Your Memory by Speaking Your Mind’s Language By learning the language your mind uses, you’ll be able to tap into your mind’s full potential and develop a remarkable memory. It’s easier than you think – and you’ll actually have fun doing it. Your Mind Thinks in Pictures Along its evolution, the brain has become amazingly effective in dealing with sensory data. It is by correctly interpreting the five senses that the mind understands the environment and takes decisions. Among the human senses, sight has become the most sophisticated and developed of all. Imagery is the real language of the mind. If I ask you to think about a horse, what comes to your mind? Visual Thinking and Memory To fully illustrate the astonishing effect that images have on your memory, let’s walk through a basic memorization technique called memory pegging. Before getting to the technique, let me give you a simple challenge: memorize a groceries list of ten items. baconeggswinebatteriesbubble gummilkenvelopesspinachcoffeetomato Learning Your Mind’s Basic Vocabulary

Printable Flash Cards for Vocabulary Words-with Photographs Sluggish Sluggish audio/easy/sluggish.mp3 adjective lacking energy; inactive Our cat is sluggish during the day. sluggish.jpg Gush Gush audio/easy/gush.mp3 verb to flow out forcefully, often in large amounts Water gushed down the waterfall. gush.jpg Predicament Predicament audio/easy/predicament.mp3 noun a difficult situation The animal was left in a predicament. predicament.jpg Weary Weary physically or mentally exhausted The programmer was so weary that he fell asleep on the job. weary.jpg Ruffle Ruffle audio/easy/ruffle.mp3 to raise (feathers) The macaw ruffled its feathers. ruffle.jpg Expedition Expedition audio/easy/expedition.mp3 a journey or voyage made for a specific purpose The scientists made an expedition to Alaska to study wildlife. expedition.jpg Wrath Wrath fierce anger I was the victim of his wrath. wrath.jpg Grove Grove audio/easy/grove.mp3 a group of trees without undergrowth We came across a small grove. grove.jpg Hulking Hulking audio/easy/hulking.mp3 so large as to appear clumsy A hulking rhino stood before me. Immerse