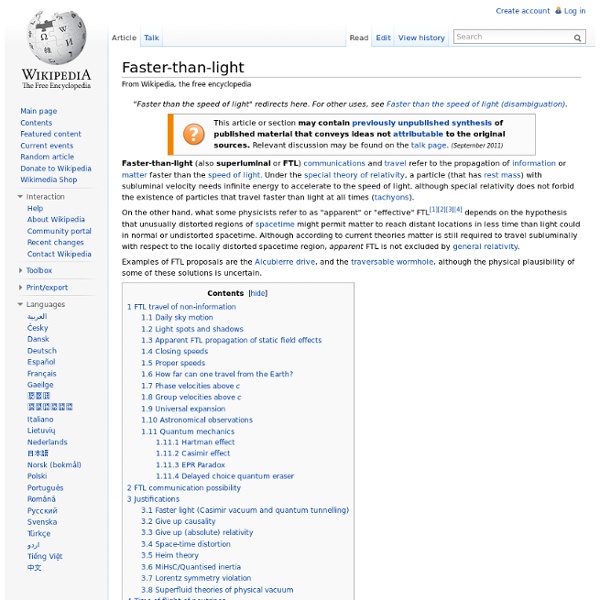 Faster-than-light (also superluminal or FTL) communications and travel refer to the propagation of information or matter faster than the speed of light. Under the special theory of relativity, a particle (that has rest mass) with subluminal velocity needs infinite energy to accelerate to the speed of light, although special relativity does not forbid the existence of particles that travel faster than light at all times (tachyons). On the other hand, what some physicists refer to as "apparent" or "effective" FTL[1][2][3][4] depends on the hypothesis that unusually distorted regions of spacetime might permit matter to reach distant locations in less time than light could in normal or undistorted spacetime. Although according to current theories matter is still required to travel subluminally with respect to the locally distorted spacetime region, apparent FTL is not excluded by general relativity. FTL travel of non-information[edit] Daily sky motion[edit] Light spots and shadows[edit] Related:  Faster than Light Travel

Alcubierre drive Two-dimensional visualization of the Alcubierre drive, showing the opposing regions of expanding and contracting spacetime that displace the central region. The Alcubierre drive or Alcubierre metric (referring to metric tensor) is a speculative idea based on a solution of Einstein's field equations in general relativity as proposed by theoretical physicist Miguel Alcubierre, by which a spacecraft could achieve faster-than-light travel if a configurable energy-density field lower than that of vacuum (i.e. negative mass) could be created. Rather than exceeding the speed of light within its local frame of reference, a spacecraft would traverse distances by contracting space in front of it and expanding space behind it, resulting in effective faster-than-light travel. History[edit] Alcubierre metric[edit] The Alcubierre metric defines the warp-drive spacetime. Mathematics of the Alcubierre drive[edit] where is a positive definite metric on each of the hypersurfaces. and with arbitrary parameters .

Wormhole A wormhole, also known as an Einstein–Rosen bridge, is a hypothetical topological feature of spacetime that would fundamentally be a "shortcut" through spacetime. A wormhole is much like a tunnel with two ends each in separate points in spacetime. For a simplified notion of a wormhole, visualize space as a two-dimensional (2D) surface. In this case, a wormhole can be pictured as the 2D surface of a tube that connects different parts of the surface. The mouths of a wormhole are analogous to the holes at either end of the tube in a 2D plane. Researchers have no observational evidence for wormholes, but the equations of the theory of general relativity have valid solutions which contain wormholes. The American theoretical physicist John Archibald Wheeler coined the term wormhole in 1957; however, in 1921, the German mathematician Hermann Weyl already had proposed the wormhole theory, in connection with mass analysis of electromagnetic field energy.[12] Definition[edit] Time travel[edit]

What if our eyes could see a wider gamut of the electromagnetic spectrum? | Gearside Creative Have you ever wondered what the world would look like if our eyes could see infrared and ultraviolet light? What if the visual spectrum of light was wider? What if we could see the entire electromagnetic spectrum? Currently, we know that blue plus yellow equals green, but would that change if our eyes could detect more wavelengths of color? Humans are trichromats, meaning we have cones sensitive to red, green, and blue light. On the other end of the spectrum is infrared light, which is an interesting region since our bodies actually emit light of this frequency. If you could see x-rays, you would no longer be able to sleep without an iron eyemask since x-rays can so easily penetrate our skin, so you would not be able to turn off your x-ray vision. Our sky actually glows with microwaves. Since gamma rays are not as common as other frequencies in the spectrum, our eyes would not see them from many sources.

NASA Starts Work on Real Life Star Trek Warp Drive Faster than Light Travel New Wormhole Theory Uses Space Photon Energy “Fluid” A new theory expands on other theories and adds photon energy “fluid” as a way to support wormholes. The introduction to the paper states the following. Wormholes are hypothetical geometrical structures connecting two universes or two distant parts of the same universe. For a simple visual explanation of a wormhole, consider spacetime visualized as a two-dimensional (2D) surface. “A possible cause of the late-time cosmic acceleration is an exotic ﬂuid with an equation of state lying within the phantom regime, i.e., w = p/ρ < −1. FIG. 1: The plot depicts the function H(x, a), for α = 1/2 and where the parameter x = r0/r, lying in the range 0 < x ≤ 1, has been deﬁned in order to deﬁne the entire spacetime. By using this theory an advanced civilization would , in theory, be able to mine photon “fluid” for Phantom Energy to construct micro worm holes for such things as transportation. Please enter the url to a YouTube video. 1. Related In "NASA"

Impossible colors Impossible colors or forbidden colors are hues that cannot be perceived by ordinary viewing conditions from light that is a combination of various intensities of the various frequencies of visible light. Examples of impossible colors are bluish-yellow and reddish-green.[1] This does not mean the muddy brown color created when mixing red and green pigments (such as paints), or the green color from mixing yellow and blue pigments, but rather colors that appear to be similar to, for example, both red and green, or both yellow and blue. Other colors never experienced by ordinary viewing, but perceivable under special artificial laboratory conditions, would also be termed impossible colors. Where opposing colors cancel each other out, the remaining color on the vertical axis is perceived. Opponent process[edit] The opponent process and chimerical colors[edit] By staring at a "fatigue template" for 20-60 seconds, then switching to a neutral target, it is possible to view "impossible" colors.

White–Juday warp-field interferometer Motivation for the experiment[edit] The NASA research team lead by Harold White and their university partners currently aim to experimentally evaluate several concepts, especially a redesigned energy-density topology as well as an implication of brane cosmology theory. If space actually were to be embedded in higher dimensions, the energy requirements could be decreased dramatically and a comparatively small energy density could already lead to a measurable (i.e. using an interferometer) curvature of spacetime.[1] The theoretical framework for the experiment dates back to work by Harold White from 2003 as well as work by White and Eric W. Davis from 2006 that was published in the AIP, where they also consider how baryonic matter could, at least mathematically, adopt characteristics of dark energy (see section below). Theoretical framework[edit] The metric derived by Alcubierre was mathematically motivated by the cosmological inflation. Interferometer experiment[edit] Results[edit] [edit]

Daydreaming Beyond the Solar System with Warp Field Mechanics This article was authored by Harold “Sonny” White and Catherine Ragin Williams Sure and is a submission of the Exotic Research Group of Icarus Interstellar. Sure, the Red Planet or an asteroid are enticing destinations, but what if one day we wanted to go really, really far out? With the technology we have today, it’s not in the realm of possibility. But it could be … and the Eagleworks Laboratories at Johnson Space Center are doing the mathematics and physics required to find the answers that defy traditional Newtonian laws. Enter: The space warp. It’s the same space, and the same standard of time, but if we can theoretically manipulate it for our purposes, interstellar flight could be an option on a future technology roadmap. Back in the 1970s, the British Interplanetary Society looked into what it would take to send a robotic probe to reach Barnard’s Star, about 6 light years (or 380,000 AU) away, within 50 years. The loopholes, amazingly, can be found in mathematical equations.

The eyes have it: Seeing ultraviolet, exploring color One of the enduring commonalities across most human societies is the belief that our eyes are a window into the immutable truth of the universe. Eyewitnesses are accorded special status in trials, despite repeated studies demonstrating how fallible such on-the-scene reports can be. The idea that sight conveys reality is enshrined in everything from dusty myths and sacred texts to modern-day cop shows. Former Air Force Officer and engineer Alek Komar has spent a considerable amount of time detailing how his color vision changed following major cataract surgery. The image above is Komar’s simulation of what UV light looks like to him on surfaces where the rest of us just see black. This image shows a Rudbeckia flower, first in visible light, second with simulated tetrachromatic vision as butterflies and bees would see it. Komar’s case is interesting for multiple reasons.