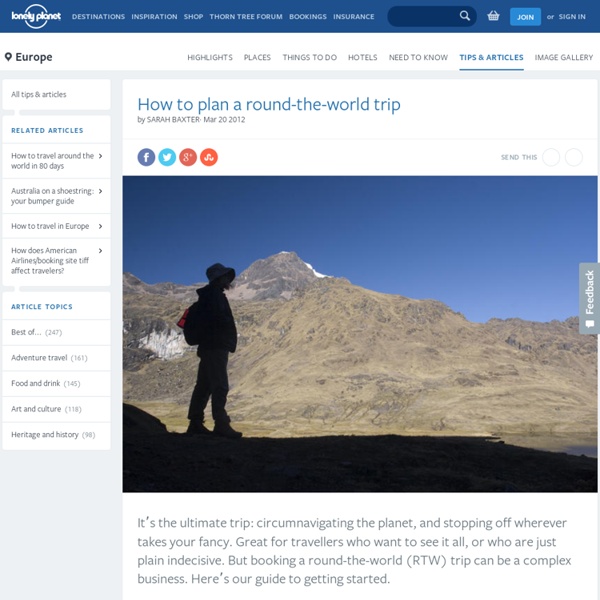 Itʼs the ultimate trip: circumnavigating the planet, and stopping off wherever takes your fancy. Great for travellers who want to see it all, or who are just plain indecisive. But booking a round-the-world (RTW) trip can be a complex business. Hereʼs our guide to getting started. How to do it The most economical way to circumnavigate is to buy a round-the-world air ticket that uses one airline alliance. There are rules: you must follow one global direction (east or west – no backtracking); you must start and finish in the same country; and you must book all your flights before departure, though you can change them later (which may incur extra charges). How long you need You could whip round the world in a weekend if you flew non-stop. When to go The weather will never be ideal in all your stops. Pin this image Image by Christian Steen Where to go The classic (and cheapest) RTW tickets flit between a few big cities, for example London – Bangkok – Singapore – Sydney – LA. Tips, tricks & pitfalls

100 Exquisite Adjectives By Mark Nichol Adjectives — descriptive words that modify nouns — often come under fire for their cluttering quality, but often it’s quality, not quantity, that is the issue. Plenty of tired adjectives are available to spoil a good sentence, but when you find just the right word for the job, enrichment ensues. Practice precision when you select words. Here’s a list of adjectives: Build Your Own Wall ? Before I Die If you’re in­ter­ested in cre­at­ing a wall, we’ve pro­vided many re­sources on this page. We have dis­con­tin­ued sell­ing the toolkit. How­ever, you can pur­chase all the toolkit items di­rectly from the man­u­fac­tur­ers—we in­cluded links in the What You’ll Need sec­tion below. We also cre­ated a folder of free re­sources you can down­load here. It in­cludes a step-by-step guide, a check­list of ma­te­ri­als, and help­ful ex­am­ples (also shown below), as well as files of the sten­cils if you’d like to cre­ate your own or edit them for an­other lan­guage.

40 Most Useful Travel Websites That Can Save You a Fortune Welcome Stumbled Upon & Delicious Users: You may also want to check out our 180+ Best Money Saving Tools. Traveling doesn't have to break the bank (in fact, you can travel for free), and there are plenty of places that'll help you find the best vacation for your budget. Get discounts and the insider scoop with these great resources. 100 little things that travel has taught me Travel has been one of my most valuable teachers. Rather than sit in a classroom and learn about the world through a someone else’s eyes, I did it through adventures and misadventures, tears and laughter. I know I still have so much to discover, but here are some lessons that sometimes I had to learn the hard way.

2014s Key Men’s Hairstyle Trend Introduction We haven’t seen many new trends or dramatic changes within men’s hair over the past few years. Hairstyles have been tweaked here and there but overall, classic cuts have been in fashion for a while now. Last season the 1990s-inspired look was everywhere – it seems fashion and hair has got a bit of its edge back.

Read page 99s & give feedback Why Page 99, Not Page 1? Because it's arbitrary. It's rarely as worked on as the elements we usually judge a book by. Idéias criativas Janela SEAT Redesign your window to create a cozy corner to curl up in the sun. What would you wish for? For the second part here Edinburgh Military Tattoo - packages Set against the spectacular backdrop of the floodlit Edinburgh Castle, almost a thousand musicians, pipers, drummers, singers and dancers perform at The Royal Edinburgh Military Tattoo on the cobbled Esplanade. Each year some of the most memorable highlights are the stirring performances of the Massed Pipes and Drums and the Massed Military Bands that emerge from the huge castle gates playing the stirring battle tunes of Scotland's famed regiments. Add to this the spectacular displays from the many overseas performers who bring music, action and colour to the event in Edinburgh and you have a winning blend that always keeps the Tattoo fresh, exciting and alive, even for the many faithful fans who return here every year. This unforgettable spectacle is brought to an emotional and poignant close each evening as a lone piper, spotlit high on the castle ramparts, plays a haunting lament. Taste of the Tattoo

Matthew effect (sociology) For unto every one that hath shall be given, and he shall have abundance: but from him that hath not shall be taken even that which he hath. Sociology of science[edit] In the sociology of science, "Matthew effect" was a term coined by Robert K. Merton to describe how, among other things, eminent scientists will often get more credit than a comparatively unknown researcher, even if their work is similar; it also means that credit will usually be given to researchers who are already famous.[3][4] For example, a prize will almost always be awarded to the most senior researcher involved in a project, even if all the work was done by a graduate student. This was later formulated by Stephen Stigler as Stigler's law — "No scientific discovery is named after its original discoverer" — with Stigler explicitly naming Merton as the true discoverer, making his 'law' in example of itself. Examples[edit]

Here Are 25 Beautiful Adventures You Should Be Having Right Now We can’t all be globetrotting secret agents or jet-setters like The Most Interesting Man In The World, but we can definitely plan awesome vacations to take us to some cool places we can have an adventure or two in. Here are 20 amazing pictures of equally amazing places that will get your mind wandering, whether you’re sitting at home, at a desk or in traffic. (Click picture for the larger image!) 1. Hitch-hiking - A lost art and a little like couchsurfing Hitching is a little like couchsurfing in that it epitomises the spirit of independent and budget travel. Dispensing with the services or your own vehicle, public transport or reserved accommodation requires a certain attitude that full embraces adventure. It also requires that the traveller who decides to hitch to accept there is an inherent risk involved and therefore they need to remain alert for any signs that their ‘benefactor’ is anything less than safe.