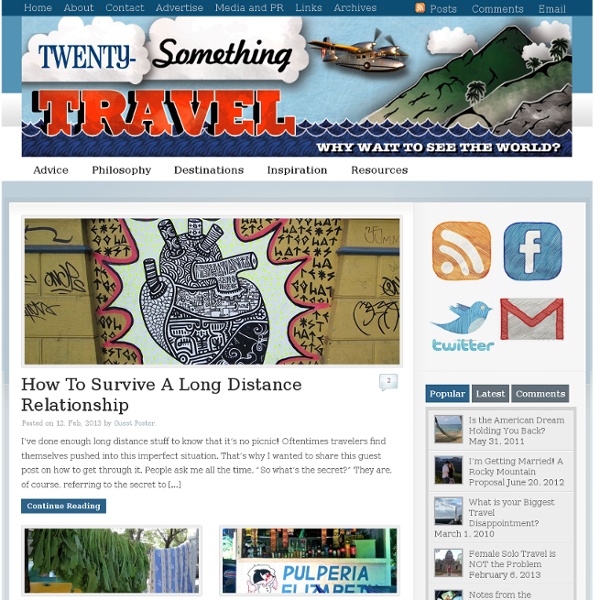 Solo female travel - Nine myths and one truth This week's guest blogger, with a post titled 'Solo female travel - Nine myths and one truth', is Stephanie Yoder, a girl who can't sit still. She's a traveller, a writer and blogger at Twenty-Something Travel, a website about travel for young people. To keep up to date with Stephanie you can follower her on Twitter and/or (both!) 'like' her on facebook. So you have this great trip planned out, to a place you've really been longing to see, but you can't seem to convince anyone to come with you. 1. 2. 3. 4. 5. 6. 7. 8. 9. And the one truth? If you’re female and about to set on your own just remember this - it's okay to be nervous.

New Tab Never Ending Voyage Adventurous Kate | The Solo Female Travel Blog American Cool: Smithsonian National Portrait Gallery examines what it means to be cool in America. (Photos.) Copyright William Claxton Estate. Courtesy of Fahey/Klein Gallery. Joel Dinerstein has whittled down the definition of “cool”: a person who shows a “relaxed intensity.” Dinerstein, the director of the American studies program at Tulane University and a scholar, lecturer, and author of the concept of cool, sought to curate an exhibit that displayed who, rather than what, has defined “cool,” a term originally coined by black jazz musicians in the 1940s. Dinerstein stressed that the idea was to create an intellectual foundation that was a more objective platform about cool as opposed to the often subjective definition from which cool is typically examined. Copyright Marcia Resnick. Copyright Julian Wasser. Copyright Robert Mapplethorpe Foundation. Goodyear, who is currently the co-director of the Bowdoin College Museum of Art and spent 12 years as the curator of photography at the National Portrait Gallery, agreed with Dinerstein. Copyright Alfred Eisenstaedt. Copyright Cass Bird.

HappyTime blog C'est Christine l Solo Female Travel Blog You're a Grownup, You Should Know How to Fix These Things By Jules Suzdaltsev Chances are great that you’re probably living in a relatively decrepit building built by a generation that knew how to change a light bulb without Googling it. But in a city of eternal youth, nobody knows how to fix a goddamn thing. I don’t know if it’s cultural or generational, but it has got to stop. Weatherproof your windows This city is always 65°, and since your landlord probably won’t replace your windows with double-paned weatherproof ones (although you should definitely ask for them), all you need is some insulating foam tape. Clear your slow-draining sink I know this sounds intimidating, but you can clear most clogged drains yourself with just a small towel (maybe a vice grip) and a bucket. Remove the P-trap to see if it’s clogged or grimy. Fix that squeaky door or sticky lock You’ve always been told to oil everything, probably with WD-40, but that shit was invented in the ’50s. Fill in those dang nail holes in the wall Make cupboards stay shut

Budget Travel Adventures How to See the World: Art of Travel; European and World Backpacking; On $25 a Day or Less Someone drove all around SF (literally) to make this gif... impressive