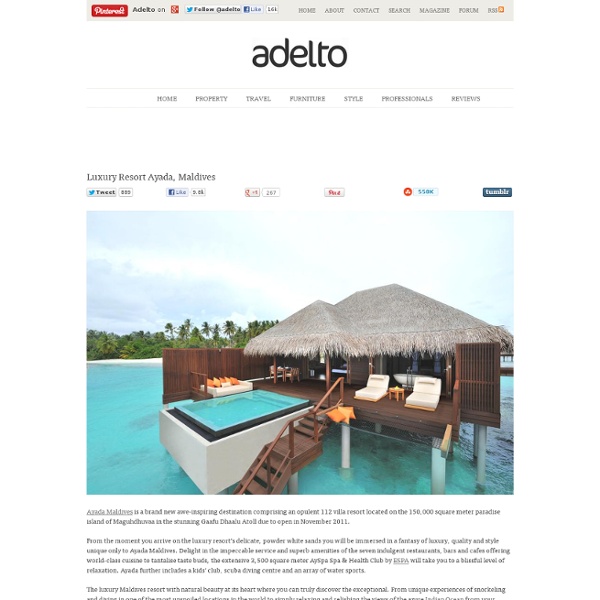 Luxury Resort Ayada, Maldives Ayada Maldives is a brand new awe-inspiring destination comprising an opulent 112 villa resort located on the 150,000 square meter paradise island of Maguhdhuvaa in the stunning Gaafu Dhaalu Atoll. From the moment you arrive on the luxury resort’s delicate, powder white sands you will be immersed in a fantasy of luxury, quality and style unique only to Ayada Maldives. Delight in the impeccable service and superb amenities of the seven indulgent restaurants, bars and cafes offering world-class cuisine to tantalise taste buds, the extensive 3,500 square meter AySpa Spa & Health Club by ESPA will take you to a blissful level of relaxation. Ayada further includes a kids’ club, scuba diving centre and an array of water sports. The luxury Maldives resort with natural beauty at its heart where you can truly discover the exceptional. About Assif Majid Assif is a freelance British journalist who spends his time between Leeds, Manchester and London.

Amazing Places To Experience Around The Globe (Part 1) Preachers Rock, Preikestolen, Norway Blue Caves - Zakynthos Island, Greece Skaftafeli - Iceland Plitvice Lakes – Croatia Melissani Undercover Cave and Lake One of the Ionian islands in Greece, Kefalonia is definitely the greenest and greatest. There’s great quantity of gorgeous nature and breathtaking landscape there. Vacationers and travelers who arrive here are fascinated by the magnificent rugged mountain ranges and also the valleys in between them which are full of number of vineyards.

Alhambra, Granada The ticket conundrum The town strictly limits the number of visitors to the Alhambra to 6,600 people each day, with just 300 every half-hour to the Nasrid palaces. Opening times are mid-March to mid-October 8.30am-2pm and 2pm-8pm, and mid-November to mid-March 8.30am-2pm and 2pm-6pm. The Luxury Dhigu Resort, Maldives The luxury Dhigu Resort, Maldives Anantara Dhigu Resort & Spa is encircled by mystic lagoons and unspoilt crystal shores, the resort is a heavenly sanctuary on a secluded paradise island, offering barefoot elegance in one of the world’s most celebrated tropical havens. Here the sparkling turquoise waters of the Indian Ocean offer an endless horizon of aquatic allure and the evocative location is matched by a tranquil island design style. Anantara Dhigu is a luxurious five-star resort hidden on tropical terrain on Dhigufinolhu Island in the Maldives’ South Male Atoll, a mere 35 minute speedboat journey from the island nation’s international airport, or a scenic five minutes by private chartered seaplane. Male-based architect Mohamed Shafeeq from Group X Design Associates and Thailand-based interior design company, Abacus, headed by John Lightbody, have styled the resort’s distinctive environment as a creative complement to the natural beauty of the island. Anantara Dhigu, P.O.

Plitvice, a watery paradise in Croatia In recent years, Croatia has changed from a relative unknown to one of the trendiest destinations in Europe. To a great extent this is due to the country's rocky littoral, which, washed by the Adriatic, is considered one of the most beautiful of the Mediterranean coastlines. Then there is the rich history and cultural heritage of medieval towns such as Dubrovnik, Split and Sibenik. 10 places you should visit before you die « Go! from HomeAway UPDATE: Discover the best places on earth and receive personalised travel recommendations with HomeAway’s new microsite Places to See Before You Die, your guide to the world’s once in a lifetime destinations. From great architectural feats to breathtaking natural beauty, the world is full of fascinating places to see before you die. Thanks to films such as The Bucket List, starring Jack Nicholson and Morgan Freeman, making life lists of things to do before you kick the bucket has become popular with those determined to embrace all the world has to offer while they are still alive. So if you want to enrich your life by visiting diverse and outrageously beautiful places, then here is a list of ten places to see before you die. The Taj Mahal, India Located in Agra, India, the magnificent Taj Mahal is a UNESCO World Heritage site and probably the most recognizable monument in the world.

Almost Untouched Nature - Waterfall Restaurant, Philippines Image credit Visiting this interesting Waterfall Restaurant located in San Pablo City, Philippines at the Villa Escudero Plantations and Resort can be a truly unique and memorable experience. Visitors can enjoy in lunch served on bamboo dining tables while the crystalline running water flows under their feet. Besides enjoying the authentic local cuisine, you can enjoy the almost untouched nature of the region formerly occupied by a farm and coconut plantations. If you need to spend calories after lunch then you have opportunity to do some sports activities like Bamboo rafts .

Craft beer in Ireland: 10 pubs and microbreweries to explore Oscar Wilde called work "the curse of the drinking classes". But in his native Ireland these days, it seems their main chore is finding a drinking establishment that's still open: since 2006 more than 1,000 pubs have closed. However, a new generation of craft brewers and brewpubs are filling the gap, catering for drinkers who want something more than the ubiquitous pint of Guinness. Reuben Grey of Beoir, a consumer group that supports microbreweries, says small brewers are innovating in the face of formidable competition from Guinness and the rest. "Back in the 1990s the craft ale scene in Ireland didn't really exist," says Reuben. "But a change in beer duties meant independent brewers got 50% tax rebates, which changed everything.

Amazing Places (Part 3) Devetashkata Cave - Bulgaria Ben Bulben at County Sligo, Ireland Shark Island - Sydney The Most Beautiful Place to Travel To - travel.FeedBox.info Hamilton Pool Nature Preserve (Dripping Springs, 37 miles on Highway 71 west of Austin, Texas) is one of the most beautiful places in the world. A subterranean lake coming to the surface from under the stone arch grotto is complemented with a waterfall. The lake was formed as a result of the collapse of a limestone dome over an underground river because of massive erosion. After heavy rains water falls from the edge of the cave, 14 meters high. The underground river flows into the nearby Pedernales river, which in turn is a tributary of Colorado. Until the 19th century, American Indian tribes Apaches and Tokava lived there.

15 Amazing Castles from Around the Globe Although designed and built for the prominent purpose of defense, today the castles seem like somewhat unrealistic constructions straight from the fairytale world. From solid strongholds to oriental fortresses and highly decorative palaces, the castles are our connection to the past, where legends mix with history and reality blends with a fairyland. This fairytale castle is the historical seat of the Prussian Kings and German Emperors. Its origin dates back to the Middle Ages - it was built in the 11th century, then completely destroyed in 1423 and reconstructed in 1461. The view from the castle that stands on top of Mount Hohenzollern (855 m) is as stunning as the complex itself.

9 of the Coolest Secret Subway Stations in the World If you’re anything like us, you’re fascinated by the secret worlds of underground transportation. What goes on in abandoned subway stations? Do mole people exist? Have we been approaching Platform 9¾ at the wrong angle? A couple months ago, we brought you a collection of beautiful abandoned train stations from all over the world. Now, we’re going underground to bring you the bizarre stories behind some of the world’s coolest and eeriest abandoned subways.