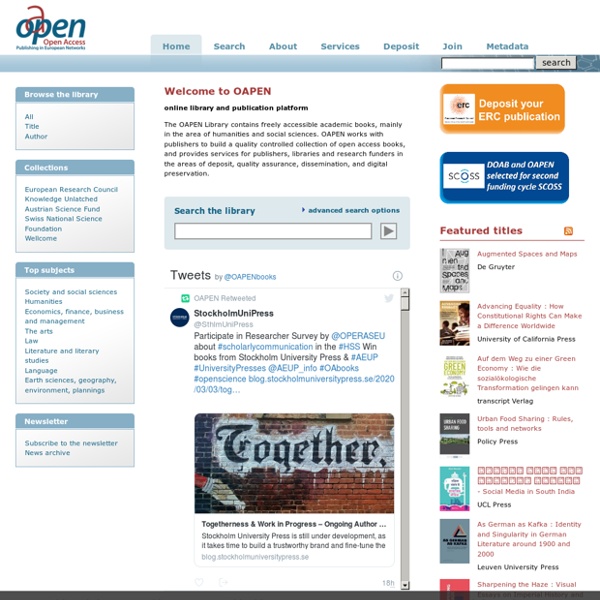 Oxford Open OUP Supports Open Access Oxford University Press (OUP) is mission-driven to facilitate the widest possible dissemination of high-quality research. We embrace both green and gold open access (OA) publishing to support this mission. A Proven Track Record of Success OUP has been publishing OA content since 2004. L'Internationale - Library The Glossary of Common Knowledge (GCK) is a compilation of art terminology that differs substantially from what is found in the existing literature on art, and constitutes a five-year research project conducted by Moderna galerija (MG+MSUM), in the framework of L'Internationale's programme The Uses of Art. In collaboration with institutions and individuals from Europe and other parts of the world, 66 contributors/narrators proposed terms relating to their own practices and contexts, to historical references, political or social situations, or L'Internationale projects. The terms were discussed and defined in six seminars dealing with six referential fields (historicisation, subjectivisation, geopolitics, constituencies, commons and ther institutionality) and the book follows these topics across six chapters.

Eight Books Every Spiritual Seeker Should Read “You want weapons? Go to a library. Books are the best weapons in the world.” ~ Doctor Who We all know about the big spiritual doctrines: The Bible, The Koran, The Tibetan Book of the Dead, The Tao Te Ching, but there are other books that have the spiritual substance to split your heart wide open and cut your previously held perceptions to shreds with their sacred ruthlessness and transcendent magnanimity. Keep in mind that the books chosen are just the opinion of the author. Our team - Open Book Publishers Open Book Publishers was founded in 2008 by a small group of academics at the University of Cambridge. Since then, we have grown into an international network of scholars who believe that it is time for academic publishing to become fairer, faster and more accessible. We are a registered Social Enterprise and Community Interest Company (CIC).

100 Time-Saving Search Engines for Serious Scholars (Revised) Back in 2010, we shared with you 100 awesome search engines and research resources in our post: 100 Time-Saving Search Engines for Serious Scholars. It’s been an incredible resource, but now, it’s time for an update. Some services have moved on, others have been created, and we’ve found some new discoveries, too. Many of our original 100 are still going strong, but we’ve updated where necessary and added some of our new favorites, too.

We Asked 105 Experts What Scares and Inspires Them Most About the Future Our poll of 105 experts highlighted climate change and misinformation as major threats, and young people as sources of optimism. Image: Cathryn Virginia The future is wonderful, the future is terrifying. That’s our motto at Motherboard. Envisioning the future defined by our wildest ambitions or our deepest fears is an instinct as old as human culture. Medieval European Culture CENDARI will draw together resources to investigate the consciousness of place in medieval culture through the examination of texts – not only literary, but historiographical, geographic and lexicographic. Linguistic analysis will establish a relationship between the evolution of the language and the local conditions. Tracing manuscripts, their cultural contexts and the places of their production, custody and dissemination, we can build reliable hypotheses on the sensitization through time of the various European geopolitical areas to the cultural currents flowing through and around them. Aims:

A Compendium of Useful Information for the Practical Man/Camping and Hiking The Camp Sheet[edit] From time to time in this department I have mentioned an oiled muslin sheet for the camp outfit. In the first place it should be made with the idea of accommodating itself to the usages of a two man camp, because more often two go together than one alone; or more than two in company, unless it is a regular party camp, which is usually fully equipped. For two men you should buy a piece of sheeting such as is used in making ordinary bed sheets. This should be not less than twelve feet long, fourteen feet is even better.

Art Base Africa MagazineCritic's CircleIndexMultimediaAboutContact Artists | Projects Artist A- Z ABCDEFGHIJKLMNOPQRSTUVWXYZ | Browse All Artist Ada Umeofia Pirate Bay Founder: ‘I Have Given Up’ “The internet is shit today. It’s broken. It was probably always broken, but it’s worse than ever.” My conversation with Peter Sunde, one of the founders and spokespersons of The Pirate Bay, did not start out optimistically. There’s good reason for that: In the last couple of months, the contemporary download culture shows heavy signs of defeat in the battle for the internet. Asking a better question? Online Resources to Support Higher Order Questions for Higher Order Learning – Bloom’s Digital Taxonomy We are all asked questions. Factual recall of information is something we all do. List, name, describe, identify……. But with a more interesting question can be demonstrated a deeper understanding of the facts, a greater engagement with the task, a demonstration that the learning can be applied in a different context, and the opportunity can be provided for creativity to flourish. Asking the right question, or setting a more imaginative task, at the right time can help learners of all ages engage with their learning.

"From the site: online library and publication platform OAPEN (Open Access Publishing in European Networks) is a collaborative initiative to develop and implement a sustainable Open Access publication model for academic books in the Humanities and Social Sciences. The OAPEN Library aims to improve the visibility and usability of high quality academic research by aggregating peer reviewed Open Access publications from across Europe." by macopa Nov 10