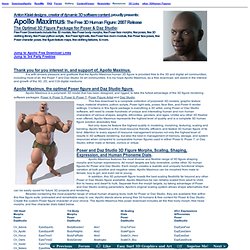 Jump to Apollo Free Download Links Jump to 3rd Party Freebies Thank you for you interest in, and support of, Apollo Maximus. It is with sincere pleasure and gratitude that the Apollo Maximus human 3D figure is provided free to the 3D and digital art communities, including most of all, the Poser 7 and Daz Studio 3d art communities. Apollo Maximus, the optimal Poser figure and Daz Studio figure. Please link to this page or to Enjoy! Apollo Maximus - PoserContentWiki. Created by Poser content creator/consultant Anton Kisiel, ApolloMaximus 2005 was released in 2005 and sold at RDNA. 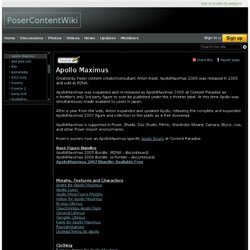 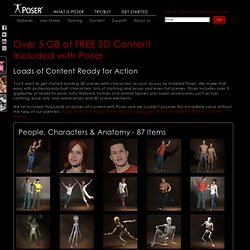 We make that easy with professionally built characters, lots of clothing and props and even full scenes. Poser includes over 5 gigabytes of ready-to-pose, fully textured, human and animal figures, plus basic accessories such as hair, clothing, pose sets, real world props and 3D scene elements. We've included thousands of dollars of content with Poser and we couldn't provide this incredible value without the help of our partners.