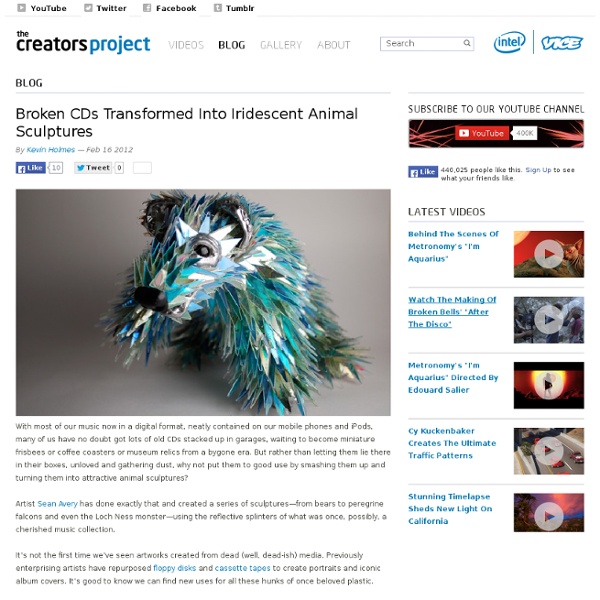 With most of our music now in a digital format, neatly contained on our mobile phones and iPods, many of us have no doubt got lots of old CDs stacked up in garages, waiting to become miniature frisbees or coffee coasters or museum relics from a bygone era. But rather than letting them lie there in their boxes, unloved and gathering dust, why not put them to good use by smashing them up and turning them into attractive animal sculptures? Artist Sean Avery has done exactly that and created a series of sculptures—from bears to peregrine falcons and even the Loch Ness monster—using the reflective splinters of what was once, possibly, a cherished music collection. It’s not the first time we’ve seen artworks created from dead (well, dead-ish) media. Previously enterprising artists have repurposed floppy disks and cassette tapes to create portraits and iconic album covers. It’s good to know we can find new uses for all these hunks of once beloved plastic. [via Colossal]

Jellyfish-like Bowls Photos: Gülnur Özdağlar Plastic bottles -- that environmental bane of a disposable, modern society -- can be both an abundant form of pollution in waterways and oceans, as well as a materials source for mind-boggling art. In the skillful hands of Turkish architect and upcycling designer Gülnur Özdağlar the unremarkable PET plastic bottle is transformed into gorgeously diaphanous and functional objects like bowls and jewelry. Using simple tools like a candle, scissors and a soldering iron, Özdağlar upcycles bottles into a bewildering range of ephemeral accessories that under the light, look like fantastical, tentacled sea creatures or little undersea treasures. So from this: ... to this:

Thousands of Plastic Figures Hold Up the Floor One of the most exciting contemporary artists of our time, Korean Do Ho Suh, created this large sculptural installation that doesn't look like much until you come closer. Glass plates rest on thousands of multicolored miniature plastic figures who are crowded together with their heads and arms turned skyward. Together, they are holding the weight of the individual visitor who steps onto the floor. Currently showing at Lehmann Maupin's pop-up gallery at the Singapore Tyler Print Institute (STPI), Floor is one of those installations that's wonderfully thought-provoking. The figures represent the diverse and anonymous masses of people who support and/or resist the symbolic floor. This installation can be seen, alongside works by artists Teresita Fernández, Ashley Bickerton, and Lee Bui, from now till February 11, 2012.

Incredible macro-photography of people's eyes - Lost At E Minor: For creative people He received a PhD in Theoretical Physics from Yerevan State University in 2001 for research in the field of Quantum Chaos and investigations in the field of Quantum Technologies. Yet, Suren Manvelyan is probably best known for his stunning macro-photography. Especially popular is his series of close-ups of human eyes called Your Beautiful Eyes.

Unraveling Wire Sculptures The best part about art? It will never cease to amaze us! These unraveling wire sculptures are the work of artist Tomohiro Inaba. What makes them so cool is that they come off as three-dimensional manifestation of a mad illustrator. yawning owl photo Random photo Submit your photo Stumble Thru animal photography Tags: owl

Riusuke Fukahori Paints Three-Dimensional Goldfish Embedded in Layers of Resin First: watch the video. Japanese artist Riusuke Fukahori paints three-dimensional goldfish using a complex process of poured resin. The fish are painted meticulously, layer by layer, the sandwiched slices revealing slightly more about each creature, similar to the function of a 3D printer. What People Are Pinning on Pinterest [STATS] Home, Arts and Crafts, and Style/Fashion are the most popular categories on Pinterest, a third-party study released Monday indicates. According to business intelligence firm RJ Metrics, 17.2% of all pinboards are categorized under Home, followed by Arts and Crafts (12.4%), Style/Fashion (11.7%), Food (10.5%) and Inspiration/Education (9.0%). Of those, food is the fastest-growing category. It's also the category that gets the most repins, generating on average more than 50% repins than the second most reshared category, Style and Fashion. The results were drawn across a sample of approximately 1 million pins across 9,200 different users.