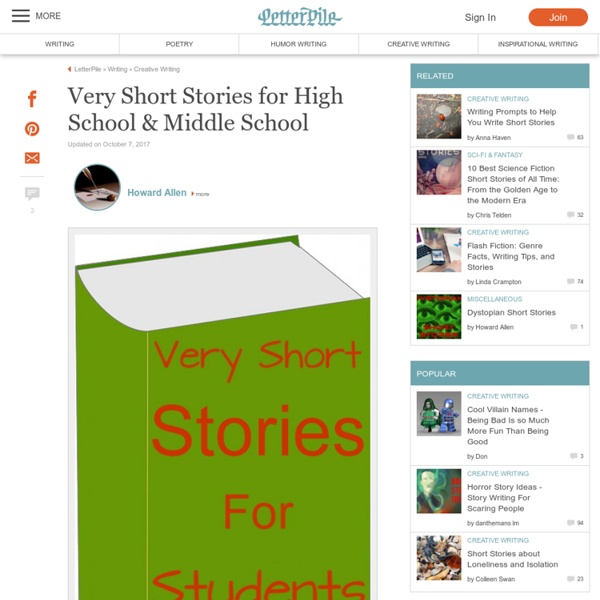 If your students are struggling to get into the short story, or you're pressed for time, here are some very brief stories to get you started. They're not as short as Hemingway's famous six-word story (For sale: baby shoes, never worn.), but they're manageable even for reluctant readers. Most are under 2,000 words; I've included an approximate word count where I could. These stories offer a complete reading experience with great economy of words. Looking for Short Stories on a Particular Subject or Theme? The Story of an Hour | Kate Chopin A woman is given the news that her husband has been killed in a railroad accident. Read "The Story of an Hour" (1,020 words) The Secret Life of Walter Mitty | James Thurber A passive and put-upon man has a series of daydreams while driving his wife on her weekly errands. Read "Walter Mitty" (2,080 words) The Use of Force | William Carlos Williams A doctor makes a house call on a sick young girl. Read "The Use of Force" (1,565 words) Girl | Jamaica Kincaid Mr.

21 Scary Halloween Short Stories For Middle School The creepier the tale, the more middle school students love it. October is the perfect month to introduce middle school students to scary short stories. [tweet_dis]Download these 21 short stories that are perfect for Halloween-related lesson plans. Richard Connell (1893-1949) The Most Dangerous Game by Richard Connell (1893-1949) Approximate Word Count: 8426 The Black Cat by Edgar Allan Poe by Edgar Allan Poe(published 1845) FOR the most wild, yet most homely narrative which I am about to pen, I neither expect nor solicit belief. Mad indeed would I be to expect it, in a case where my very senses reject their own evidence. Yet, mad am I not -- and very surely do I not dream.

Classic Short Stories This website is dedicated to the short story and to those interested in reading this delightful art form. Fewer and fewer people these days read short stories. This is unfortunate. Few will ever experience the joy that reading such fine work can give. The Lady Or The Tiger? by Frank Stockton When all the people had assembled in the galleries, and the king, surrounded by his court, sat high up on his throne of royal state on one side of the arena, he gave a signal, a door beneath him opened, and the accused subject stepped out into the amphitheater. Directly opposite him, on the other side of the enclosed space, were two doors, exactly alike and side by side. It was the duty and the privilege of the person on trial to walk directly to these doors and open one of them. He could open either door he pleased; he was subject to no guidance or influence but that of the aforementioned impartial and incorruptible chance. If he opened the one, there came out of it a hungry tiger, the fiercest and most cruel that could be procured, which immediately sprang upon him and tore him to pieces as a punishment for his guilt.

The Interlopers by Saki He strayed away by himself from the watchers whom he had placed in ambush on the crest of the hill, and wandered far down the steep slopes amid the wild tangle of undergrowth, peering through the tree trunks and listening through the whistling and skirling of the wind and the restless beating of the branches for sight and sound of the marauders. If only on this wild night, in this dark, lone spot, he might come across Georg Znaeym, man to man, with none to witness - that was the wish that was uppermost in his thoughts. And as he stepped round the trunk of a huge beech he came face to face with the man he sought. The two enemies stood glaring at one another for a long silent moment. Each had a rifle in his hand, each had hate in his heart and murder uppermost in his mind. The chance had come to give full play to the passions of a lifetime.

13 Short Stories for Engaging Secondary Students & Teaching Literary Elements - The Literary Maven Don't let your literature anthology dictate the short stories you read with your middle school and high school students. There are so many wonderful short stories out there, many of which can be used to teach a variety of literary elements and paired with other texts. Here's 13 of my favorites.1. The Sniper by Liam O'Flaherty I’m always looking for texts that will draw in my reluctant male readers. Anything with war, guns, or a little violence ups the appealing factor immediately.