"Never Date a Writer" by xstephens 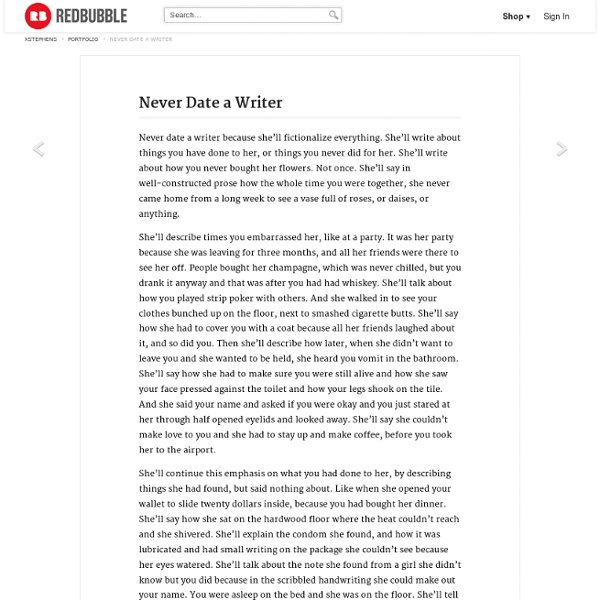 Never date a writer because she’ll fictionalize everything. She’ll write about things you have done to her, or things you never did for her. She’ll write about how you never bought her flowers. Not once. She’ll say in well-constructed prose how the whole time you were together, she never came home from a long week to see a vase full of roses, or daises, or anything. She’ll describe times you embarrassed her, like at a party. She’ll continue this emphasis on what you had done to her, by describing things she had found, but said nothing about. She’ll later describe the moment in the bedroom when she sat at the foot of the bed and you kneeled in front of her. And she’ll send you a manuscript and you’ll be on the couch where you both had sat and you’ll read every word. You’ll sit alone on that couch where you made love to her and you won’t move and the glass of whiskey on the table will not be touched.

How My Six Year Old Boy Debunked Intelligent Design I was attempting to explain to my son, Brance, who just turned six two weeks ago, why it was better to refrain from saying “Oh God!” especially around his grandparents. He didn’t understand why it was such a big deal to them and asked if “God” was a bad word. This caught me off guard a bit. I had been spending so much time teaching him about evolution by natural selection that I forgot to tell him the lie he would be confronted with someday. I decided that it was time that he heard the creation story that I grew up with. I read on, “So, he put all the water in one place and all the dry land in another.” “Why do we have to save water then? After I finished reading about the third day he was beginning to catch on. “Well that’s what some people believe,” I stated, “but I don’t think so.” “He made South America!” When I told him about the creation of the sun on the fourth day he became serious again. “Then he made the stars to add a bit of sparkle to the night,” I read. “Not even us?”

White Rabbit Theories Paul Bloom: The Case Against Empathy In 2008, Karina Encarnacion, an eight year-old girl from Missouri, wrote to President-elect Barack Obama with some advice about what kind of dog he should get for his daughters. She also suggested that he enforce recycling and ban unnecessary wars. Obama wrote to thank her, and offered some advice of his own: “If you don’t already know what it means, I want you to look up the word ‘empathy’ in the dictionary. I believe we don’t have enough empathy in our world today, and it is up to your generation to change that.” This wasn’t the first time Obama had spoken up for empathy. The word “empathy”—a rendering of the German Einfühlung, “feeling into”—is only a century old, but people have been interested for a long time in the moral implications of feeling our way into the lives of others. In this sense, empathy is an instinctive mirroring of others’ experience—James Bond gets his testicles mashed in “Casino Royale,” and male moviegoers grimace and cross their legs.

One Sentence - True stories, told in one sentence. From Agent Orange to Pesticides and Genetically Engineered Crops. Why Not to Trust Monsanto The Monsanto Corporation is among the largest pesticide and biotechnical corporations in the world today. Their products are used in most sectors of agriculture, public land upkeep, landscaping/gardening and can be found in most markets across the United States. Monsanto is a multi-billion dollar company with a diverse product base and is among the largest producers of genetically engineered crops. As a company, Monsanto promises to be the creator of new, safer, pesticides as well as stronger bio-engineered crops. © Josh Sager – June 2012 (Image Credit: Rasa13) Monsanto has produced many products, from new types of pesticide to genetically engineered crops, and has been the center of several severe controversies. During its early years, Monsanto produced PCBs (Polychlorinated biphenyl) to be used in various industrial applications. The Monsanto Corporation has a long and sometimes unfortunate history of creating new and powerful pesticides.

25 Great Calvin and Hobbes Strips. Why Bill Watterson is our hero. We've re-launched Progressive Boink, friends! Our new front page is here. Hope you enjoy. Hundreds of comic strips have been published in newspapers. The majority are terrible, and almost all the rest are mediocre. And it's really a shame that it's so difficult to quantify this strip's greatness. Calvin and Hobbes ran from 1985 to 1995. "Virtue needs some cheaper thrills." © Universal Press Syndicate Calvin is an unbelievably intelligent six-year-old. It's kind of refreshing to see a strip that doesn't feel the need to have an uplifting message, or feel like it needs to point out that it's mean to whack an innocent person upside the dome with a snowball. - Jon "He's one of the old gods! One of the top classic Calvin strips. - Bill "You've taught me nothing except how to cynically manipulate the system." Pretty much the voice of Bill Watterson dictating the current state of our school systems. - Nick "We prefer your extinction to the loss of our job." - Jon - Nick

Big Brother is Definitely Tracking Your Cell Phone The government can track your cell phone GPS without a warrant. In a frightening new decision, a federal appeals court says that you have no expectation of privacy when the police want to track your location using your cell phone. U.S. v. Skinner, Case No. 09-6497. The court said that the police don’t need to bother getting a warrant if they want to track you by using the GPS signal in your cell phone to track you. In a ruling that is right out of the pages of George Orwell’s “1984,” the Sixth U.S. The case in question involved a marijuana bust, but the ruling applies to the 85 percent of adults who own a cell phone, a dashboard navigation device and many iPads. Cell phones continue sending a signal several times a minute even when they are turned off. The U.S. In the view of the Sixth Circuit, it is just too much of a hassle for the police to get a warrant to catalog your every movement with your phone’s GPS signal. In a dissent, Sixth Circuit Judge Bernice B.