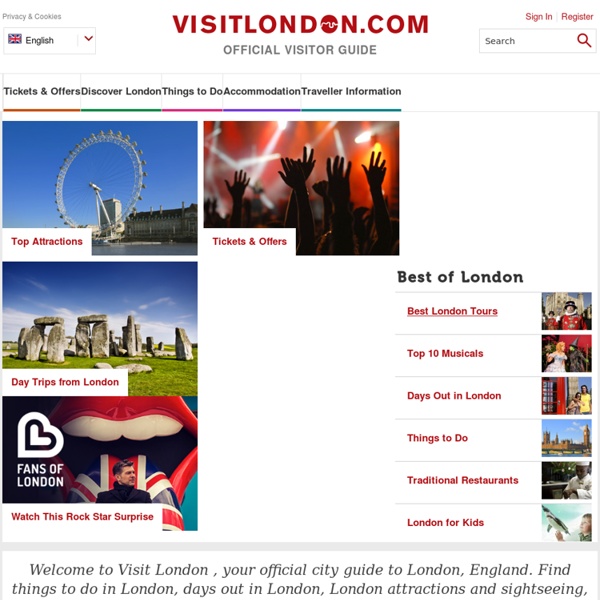 Related:  Around the world • English

London Travel Information and Travel Guide - England One of the world's most visited cities, London has something for everyone: from history and culture to fine food and good times. A Tale of Two Cities London is as much about wide-open spaces and leafy escapes as it is high-density, sight-packed exploration. The Harry Potter Lexicon click above for detailed menus, click below for special sections Affiliate Sites: These web sites have received special permission to use material from the Lexicon to create similar sites for non-English-speaking fans. L'Encyclopédie Harry Potter (in French)El Diccionario de los Magos (en Español) Listening: A Tour of London Tower Bridge, London (Copyright: Getty) When you visit a city for the first time, a good way to explore it is to go on an organised sightseeing tour. The tour will give you an overview of what there is to see and also provide you with some historical background. A popular way of seeing London is to go in one of the red double deck buses.

English speaking countries Magic Vocabulary Magic Vocabulary is an automatic generator of worksheets and games to teach vocabulary. Just enter your list of words and this website will create bingo, dominoes, crossword, memory games, etc. High Quality ESL Lesson Plans - Free Samples - $26 Membership Be a better teacher! London London i/ˈlʌndən/ is the capital city of England and the United Kingdom.[5] It is the most populous region, urban zone and metropolitan area in the United Kingdom. Standing on the River Thames, London has been a major settlement for two millennia, its history going back to its founding by the Romans, who named it Londinium.[6] London's ancient core, the City of London, largely retains its 1.12-square-mile (2.9 km2) mediaeval boundaries and in 2011 had a resident population of 7,375, making it the smallest city in England. Since at least the 19th century, the term London has also referred to the metropolis developed around this core.[7] The bulk of this conurbation forms the London region[8] and the Greater London administrative area,[9][note 1] governed by the Mayor of London and the London Assembly.[10]

Teenage slang A helpful guide to understanding teenage slang One of the themes of BBC School Report News Day is language, so we asked children in different parts of the country about their language and found that teenage slang differs wildly. We are all British, right? Project-based learning, the USA and Authentic Video in the EFL classroom The Globe Trekker/Pilot Guides video collection is a treasure trove for any English teacher. It encompasses extensive material from every corner of the world, and especially English-speaking countries are lavished with attention. Australia, Canada, Scotland, Wales, Ireland, England – you name it.

B1 Lessons - ELT Connect Would You Push The Button? Lesson – The Box In this B1 lesson, students are introduced to commonly used adjectives + prepositions such as, fascinated by & keen on to describe emotions and then review the First Conditional while watching clips of the thriller movie, The Box and predicting what will happen if the couple push the button! An engaging way to lead into the Second Conditional – groups discuss what they would do if this stranger appeared on their doorstep! London Olympics London hosted the Olympic Games in 1908, 1948 and 2012. The 2012 Summer Olympics made London the first city to have hosted the modern Games of three Olympiads. London is the only city in the United Kingdom to have ever hosted the Olympics; the United States is the only country to have hosted Summer Olympics on more occasions than the UK. Also, London is the only city to have bid more than once and still hold a 100% record. British participation in Olympic events, both as a competitor and as a host, is the responsibility of the British Olympic Association.

Listen to english This is one of the school meals which Martha Payne photographed for her blog. She had carrot soup, pasta with meat and vegetables and more carrot, and yoghurt. Today we visit Scotland, to find out what a Scottish schoolgirl thinks of her school meals. And because the European Cup Football matches have reached an interesting stage, and poor old England have been knocked out by Italy, this might be a good time to learn a new football expression. 5 TED-Ed Lessons to use in your American History classroom Carla Staffa, Burnsville Senior High School American history teacher (and all-around rockstar), uses TED-Ed Lessons in her classroom to supplement her curriculum, start conversation and spark curiosity. We caught up with Carla to find out which lessons she uses the most and what she hopes her students take away from each one. 1.) The fight for the right to vote in the United States - Nicki Beaman Griffin “The fight for the acquisition of voting rights is one that has been fought by numerous groups, yet not all eligible voters take advantage of this right. Students see the chronology of voting rights actions and legislation, and are left with thought provoking questions at the end: “Do enough citizens have the right to vote now?

Engelskspråklig litteratur og kultur Writing a Literary Essay An important competence aim for this course is to write essays or articles on literary or cultural issues, and the evaluation of this competence will be a dominating element of your final assessment. Your text can be a hand-in, a part of a full-day test or the written exam. In all cases ...