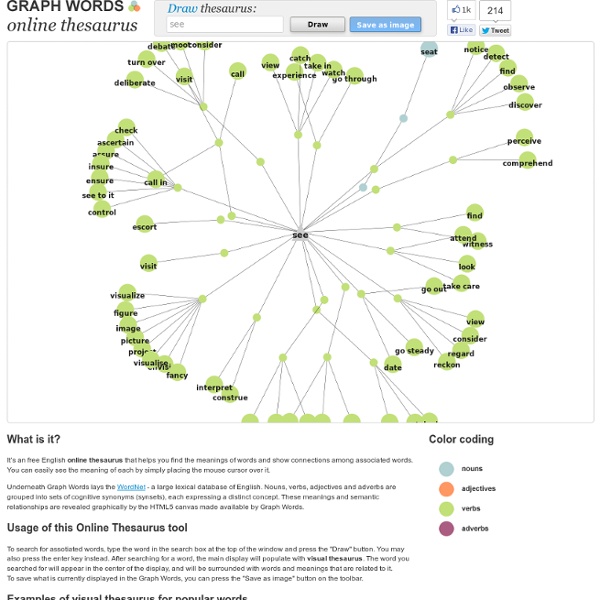 What is it? It’s an free English online thesaurus that helps you find the meanings of words and show connections among associated words. You can easily see the meaning of each by simply placing the mouse cursor over it. Underneath Graph Words lays the WordNet - a large lexical database of English. Nouns, verbs, adjectives and adverbs are grouped into sets of cognitive synonyms (synsets), each expressing a distinct concept. These meanings and semantic relationships are revealed graphically by the HTML5 canvas made available by Graph Words. Usage of this Online Thesaurus tool To search for associated words, type the word in the search box at the top of the window and press the "Draw" button. Examples of visual thesaurus for popular words Color coding

The Best Tools for Visualization Visualization is a technique to graphically represent sets of data. When data is large or abstract, visualization can help make the data easier to read or understand. There are visualization tools for search, music, networks, online communities, and almost anything else you can think of. Whether you want a desktop application or a web-based tool, there are many specific tools are available on the web that let you visualize all kinds of data. Here are some of the best: Visualize Social Networks Spelling Activities and Ideas Copyright | Super Teacher Ideas : Spelling Games; Spelling Activities; Spelling Lessons Super Teacher Ideas Spelling Lesson Ideas, Games, & Activities Activities & Lesson Ideas A fun, creative menu of spelling ideas that have kids making, writing, finding, and playing games!

College 101: The Four Most Common Types of College Essays and How to Approach Them Essay is not a four-letter word—though you may feel like using a few of your own when it comes time to write one. Most students would rather swim in a vat full of sharks while singing the national anthem (sharks + singing = Shmoop's worst nightmare) than sit down and write an application essay. And hey, we get it. It's easy to shrug off brainstorming, outlining, and agonizing over essay prompts for a Saturday afternoon snooze or four back-to-back episodes of The Walking Dead.

Story Map The Story Map interactive includes a set of graphic organizers designed to assist teachers and students in prewriting and postreading activities. The organizers are intended to focus on the key elements of character, setting, conflict, and resolution development. Students can develop multiple characters, for example, in preparation for writing their own fiction, or they may reflect on and further develop characters from stories they have read. About ChartsBin.com What is ChartsBin? ChartsBin is a web-based data visualization tool that will allow everyone to quickly and easily create rich interactive visualizations with their own data. You can then share your interactive visualizations with others by embedding them in websites, blogs or sharing via Facebook or Twitter. We're focused on building the most exciting and engaging destination for statisticians, and computer scientists in the world.

Excerpt from Prose Works And so good-by to the war. I know not how it may have been, or may be, to others—to me the main interest I found, (and still, on recollection, find,) in the rank and file of the armies, both sides, and in those specimens amid the hospitals, and even the dead on the field. To me the points illustrating the latent personal character and eligibilities of these States, in the two or three millions of American young and middle-aged men, North and South, embodied in those armies—and especially the one-third or one-fourth of their number, stricken by wounds or disease at some time in the course of the contest—were of more significance even than the political interests involved. (As so much of a race depends on how it faces death, and how it stands personal anguish and sickness.

Free Word Cloud Generator Word clouds can be extremely useful for gaining insights into virtually any large body of text. They can be used to study such things as corporate reports, political speeches, historical documents, news reports, public opinions, tweets, and so forth. This particular word cloud generator is designed to be not only flexible and easy-to-use, but also to produce high-quality, visually appealing word cloud images. In the images created by this word cloud generator you will find that the most frequently occurring words within your text appear toward the center of the cloud, while less frequent words appear at the periphery. You will also notice that the size of each word varies in direct proportion to the frequency with which it appears in your text. This means that the most frequently occurring words are drawn using a larger font size than those words that appear less frequently.

Google Ultimate Interface About Google In 1996-1997, Larry Page and Sergey Brin came up with an algorithm to rank web pages, called PageRank. Realizing the potential to improve search engines, they tried and failed to sell the technology to any. So they founded Google, which in an incredibly short period of time has become one of the world’s most powerful companies. While primarily known as a search engine, Google now makes a wide variety of web-based and other software and is known for investing in wide-ranging projects outside their core such as through their philanthropic arm, Google.org.

Early Years A basic numeral recognition activitiy. Develop your mouse control and number skills by matching number digits to words in the 1 to 10 range. © v2vtraining.co.uk