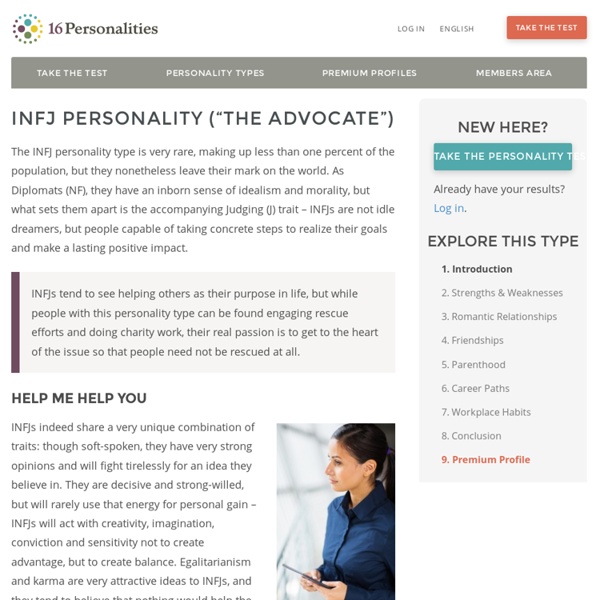 The INFJ personality type is very rare, making up less than one percent of the population, but they nonetheless leave their mark on the world. As Diplomats (NF), they have an inborn sense of idealism and morality, but what sets them apart is the accompanying Judging (J) trait – INFJs are not idle dreamers, but people capable of taking concrete steps to realize their goals and make a lasting positive impact. INFJs tend to see helping others as their purpose in life, but while people with this personality type can be found engaging rescue efforts and doing charity work, their real passion is to get to the heart of the issue so that people need not be rescued at all. Help Me Help You INFJs indeed share a very unique combination of traits: though soft-spoken, they have very strong opinions and will fight tirelessly for an idea they believe in. Every man must decide whether he will walk in the light of creative altruism or in the darkness of destructive selfishness. Live to Fight Another Day Related:  Oh the Humanity

Bystander Effect - What is the Bystander Effect What is the Bystander Effect? The term bystander effect refers to the phenomenon in which the greater the number of people present, the less likely people are to help a person in distress. When an emergency situation occurs, observers are more likely to take action if there are few or no other witnesses. In a series of classic studies, researchers Bibb Latane and John Darley (1) found that the amount of time it takes the participant to take action and seek help varies depending on how many other observers are in the room. As the participants sat filling out questionnaires, smoke began to fill the room. Example of the Bystander Effect The most frequently cited example of the bystander effect in introductory psychology textbooks is the brutal murder of a young woman named Catherine "Kitty" Genovese. Despite Genovese’s repeated calls for help, none of the dozen or so people in the nearby apartment building who heard her cries called police to report the incident. Suggested Readings: Listen:

Meetup: find your people Explore Meetup Find events hosted by local groups where you can meet new people, try something new, or just do more of what you love. Get started Photo: The Front Range Mountain Bikers Meetup Group within 50 miles of Sort by Best match All upcoming events Saved events NEW Your groups and suggestions Your groups only Your events only March 2020 Sign up Continue with Facebook Continue with Google Or sign up with email Already a member?

The Anatomy Of A Thank You Note – Krrb’s Guide To Expressing Gratitude With Style ~ Krrb Blog First off, if you can get your hands on a kid who is just learning to write and then convince said kid to write (or make a good go at writing) "Thanks" on a piece of paper that you can put into an envelope and send, you are golden. Your job is done. Who is not going to be touched by a child's early attempts at writing? Nothing says thank you like a note written by a 4 year old. But for those who don’t have the monk-like patience it takes to elicit the above pictured type of work from a pre-schooler, there is hope. You too, can produce thank you notes that would make your grandparents proud and that would bring a smile to even the most jaded of faces. I mean, if the leader of the free world has the time to write thank you notes by hand, I don't want to hear anything from the rest of us about not being able to "get around to it." Looks simple, right? The Occasion OK so here’s the first big issue to tackle: When do I need to write a thank you note? The Stationery A Postcard A Note Card 1. 2. 3.

INFJ Personality Profile By Dr. A.J. Drenth INFJs are “old souls.” Many grow up feeling wiser than would be predicted by their chronological age. Because of their strength of intuition (and commensurate detachment from physical reality), many INFJs report feeling like aliens in the world. INFJs see two people in everyone. To fully understand INFJs, it is necessary to recognize the full implications of their dominant function, Ni, being a Perceiving function. INFJs also enjoy listening to music, watching movies and television, and engaging with people. A signature feature of INFJs (and INTJs) is a deep concern for quality. While Se attends the appearance of things, Ni is concerned with their deeper qualities and substantiveness…While INJs are to some extent concerned with appearances, they are more attuned to the underlying quality and craftsmanship of things…ensuring that things are substantive, thoughtfully-crafted, and otherwise amenable to their Ni-Se tastes. INFJs’ Functional Stack Phase I (Childhood)

11 Amazing Thank You Notes From Famous People After a short stint in the New York theater world, comedienne Carol Burnett landed a job as a regular on The Garry Moore Show in 1959. She caught the attention of CBS executives, who offered her her own series in 1967. With her husband Joe Hamilton at the helm, Burnett broke new ground as the first female host of a TV variety show. The Carol Burnett Show ran for 11 seasons and earned a handful of Emmy Awards in the process. To celebrate the legendary comedienne's 85th birthday, here are some fun facts about the show and the folks who made it so side-splittingly hilarious. As Carol Burnett painfully recalled later in life, whenever she’d expressed an interest in a career in the theater as a teen, her mother would always dissuade her and recommend that she would have better luck studying to become a writer. As she was nearing graduation from UCLA, Burnett and several fellow drama students were invited to a departing professor’s house to perform at his bon voyage party.

What is Mensa? | Mensa International Curiosity Is as Important as Intelligence - Tomas Chamorro-Premuzic by Tomas Chamorro-Premuzic | 11:00 AM August 27, 2014 There seems to be wide support for the idea that we are living in an “age of complexity”, which implies that the world has never been more intricate. This idea is based on the rapid pace of technological changes, and the vast amount of information that we are generating (the two are related). Yet consider that philosophers like Leibniz (17th century) and Diderot (18th century) were already complaining about information overload. In any event, the relative complexity of different eras is of little matter to the person who is simply struggling to cope with it in everyday life. 1. Complex environments are richer in information, which creates more cognitive load and demands more brainpower or deliberate thinking from us; we cannot navigate them in autopilot (or Kahneman’s system 1 thinking). 2) EQ: EQ stands for emotional quotient and concerns our ability to perceive, control, and express emotions.

Mensa Nederland - Welkom The 9 Best Books for Meaningful Change | Ben Michaelis, Ph.D. Ch-ch-ch-ch-changes... Yes, its that time again: New Year's is almost upon us. Regardless of where you stand on New Year's resolutions, the new calendar can serve as a helpful reminder about the only true constant in all of our lives: change. Like it or not, we are all always changing and adapting to circumstances as time rolls on. This is not just a sound bite. Although change comes from inside, it doesn't mean you can't use a little help from the outside. With that, I give you my list of The 9 Best Books For Meaningful Change: 9. This book was mentioned in a session by one of my financially successful patients who told me that reading it helped him to become an entrepreneur. 8. Rubin's breakthrough book from 2011 is enlightening, personal, poignant, funny, and wise. 7. Say what you will about Tim Ferriss, the man knows how to sell books. 6. One of the first and still one of the best. 5. 4. Awaken the Giant Within is one of the most can-do inspiring books I have ever read. 3. 2. 1.

These 20 Photographs Will Leave You Speechless. Especially The 11th One. There Are No Words. Take a look at these 20 powerful photos that will leave you speechless. Some of these photos are of truly historic moments, while others, are quite heartbreaking. World War II veteran from Belarus Konstantin Pronin, 86, sits on a bench as he waits for his comrades at Gorky park during Victory Day in Moscow, Russia, on Monday, May 9, 2011. Konstantin comes to this place every year. This year he was the only person from the unit to show. Reddit100s of galaxies seen through the Hubble Deep Field (HDF), as they were 10 billion years ago. Sunset on Mars, taken in 2005 by the Spirit rover. A soldier making the long walk to defuse a car bomb in Northern Ireland. wikipedia Neil Armstrong after his Moonwalk. This was taken moments after Jewish refugees realized they weren’t being sent to their deaths at the horrible concentration camps and were in fact being saved. Ignorance is bliss – Homeless man sleeps outside a diner in Milwaukee. Nazi rally at Nuremberg in 1937. Undulating clouds. Source: Viral Nova

Absolute Time, Relative Experience | Who is the Man with the Name that Rhymes? It's been a while since another post. There are many topics that I have cached that I'd like to write on. If it weren't for the troubling aspect of so many things eating at my free time, you'd see more posts on here. I'm not sure there are many readers on here anyway, I've notice the traffic has slowed down to very little these days. Partly because Google hasn't been indexing the site correctly which I fixed not too long ago. I'm sure the sporadic updates are another reason. Lately, an intriguing concept for me has been time. In physics, time is a duration between 2 events or physical states. Psychologically, however, time is a different creature. The brain isn't like a clock. The easiest way to explain temporal resolution is to compare to something like a video camera. But the brain isn't like a video camera either. So how does that relate back to feeling of time perception? Compare that to the last day of high school. This effect isn't just related to new experiences.