The Beginner's Guide to Google+ 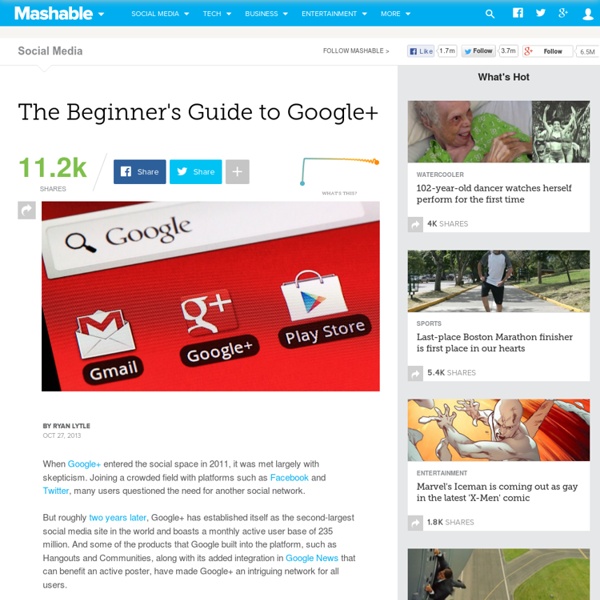 When Google+ entered the social space in 2011, it was met largely with skepticism. Joining a crowded field with platforms such as Facebook and Twitter, many users questioned the need for another social network. But roughly two years later, Google+ has established itself as the second-largest social media site in the world and boasts a monthly active user base of 235 million. And some of the products that Google built into the platform, such as Hangouts and Communities, along with its added integration in Google News that can benefit an active poster, have made Google+ an intriguing network for all users. If you're a newbie to Google+, these tips will help you get started. Creating a Google Account First things first, in order to have a Google+ account, you must have a Google account. Next, you'll be prompted to add a profile photo to accompany your Google Account. After adding your profile picture, you will then be redirected to your new Gmail account. Creating Circles Navigating the Stream

Related:  Googley goodness • Android • Get Connected • google tips • Gearing up with Google Plus

40 Google Plus Tips for Newbies Ok, so at this point, we are all newbies at Google Plus, right? At least if you got in recently via a Google Plus invite. At this point I’ve spent a decent amount of time with it and have concluded that Google has finally made a positive mark in social networking. It’s still early, but there is a lot of excitement around Google+ by those who have jumped on early, and for good reason. Google has launched a social network with several features designed to leapfrog its competition. Connected Leaders: Engaging School Communities Through Social Media “We must stop focusing primarily on technology’s dangers, as we currently do. … Many adults think they are extremely clever when they discover something “bad” about the internet … Yes, these exist … [but] let’s move on to something positive we can do with this technology.” – Marc Prensky During this past week, our middle school Facebook page received almost 5,000 views, all based upon our Twitter feed from field trips to Alsace, Normandy and the Loire Valley. This has historically been a week during which we have been deluged with phone calls and email queries about the welfare of students during these week-long excursions; this year things were quiet and parents were more engaged than ever before. From quick updates on our journey progress to snapshots of key learning experiences and social contexts, parents were able to follow our daily adventures in an informal, non-intrusive, yet informative way and our three grades were able to engage with and follow each other.

15 Must Have Google Lessons Plans to Teach Students Effective Search Skills April , 2014 Google is one of the primary search engines students turn to when doing their research. On the face of it, searching Google seems as simple as typing in a search query and waiting for returned results. In fact, effective Googling is way trickier than that. 10 Social Media Skills for 21st Century Teachers Via ET News Digital social networking is a game changer in the learning landscape. It is an invention that amounts in its importance and usefulness to the big inventions that marked all mankind history. In ancient times, cultures, in the absence of any established sign language to encode its content, were orally based. The potential of social networking sites in education is huge and we need to capitalize on it to enhance our professional development and consequently improve the quality of our instruction. Searching for articles on this topic , I came across Doug Johnson’s post on the 10 social media competencies for teachers.

Top 8 GAFE Resources for Educators Believe it or not, it’s that time again… Summer is coming to an end and soon millions of teachers and students across the Northern Hemisphere will be heading back to the classroom to kick off another school year. If you haven’t already, now’s the time to get up to speed (or refresh your knowledge) on the skills you need to help make this school year a success. If your school uses Google Apps for Education (GAFE), we’ve just made this process easier with a brand new free guide to the top GAFE resources for educators. Continue reading to learn more. If you are new to using Google Apps, the transition can seem complex. 40 Google+ Tips & Tricks For Power Users July 27, 2011, 8:24 AM — Google+ is all the rage right now. Even under its limited-invite "field trial" phase, the social sharing service is growing in leaps and bounds, with oodles of new users joining every day and even more champing at the bit to get in. Most of us, however, are only beginning to scratch the surface of what Google+ can do; like many Google products, G+ is brimming with advanced features and untapped tweaks. That's why I decided to put together this massive list of Google+ tips and tricks.

How Google+ is Rethinking Social Media You may remember a few years ago when Google+ attempted to compete with Facebook as a social website. Google branded their social initiative as the next big sharing site in which Google.com would finally be personalized. Their attempt at competition has not yet met expectations.

How Google is Making Us Stupid Google is synonymous, too, with speed and simplicity. But nothing about it has been speedier or simpler than its rise. It is not a decade since it was first launched on the website of the inventors’ Stanford alma mater, not seven years since they first attracted backing from venture capitalists, and a mere 17 months since the company raised $US2 billion by going public, a process which has since inflated its market value to $US120 billion. Most technologies penetrate either public or private sphere. Google, with its disarming ‘don’t be evil’ philosophy, has come to pervade both, as the preferred means for about half the six hundred million searches initiated every day, whether by students seeking sources, employers verifying résumés, professionals trawling journals, shoppers chasing bargains or even lovers checking partners – it is now two years since Sex and the City’s Carrie Bradshaw googled her paramour Aleksandr Petrovsky. Nor is there sign of Google’s progress slowing.

Terrific Tales of Teachers and Twitter in the Classroom Let’s have an honest discussion about Twitter and teachers. What makes Twitter a tool that teachers would want to use? How have teachers already used Twitter? What’s the honest feedback? Bradley Horowitz Says That Google Photos is Gmail for Your Images. And That Google Plus Is Not Dead… — Backchannel An interview with Google’s head of Streams, Photos and Sharing To Bradley Horowitz, Google Photos is not just another product. It’s a culmination of 25 years of his work in processing images. Horowitz — who is Google’s Vice President of Streams, Photos, and Sharing — first studied computer vision in grad school and later dropped out to co-found a company in the field, Virage. Ultimate Guide to Google Plus I’ve seen quite a few people who don’t understand Google Plus or think Google Plus is some sort of wasteland with giant swaths of inactivity. I was one of these people until I decided to dive in and really explore the social network and become active on there to see what this G+ thing is all about. The end result is this guide, a complete Google Plus guide for the person who is just getting started, or quite simply, started but staring at a boring feed with zero activity.