Is It Down Right Now? Website Down or Not? 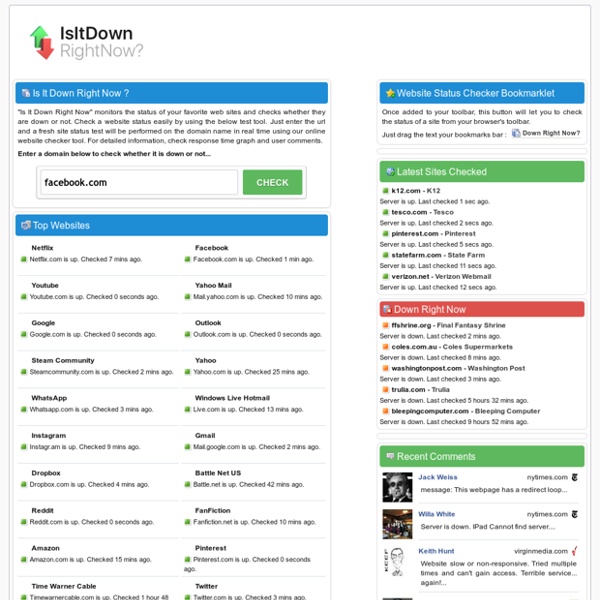 "Is It Down Right Now" monitors the status of your favorite web sites and checks whether they are down or not. Check a website status easily by using the below test tool. Just enter the url and a fresh site status test will be perfomed on the domain name in real time using our online website checker tool. For detailed information, check response time graph and user comments. Enter a domain below to check whether it is down or not...

Urban Explorer Finds The Sad Remains Of The Soviet Space Shuttle Program Ralph Mirebs, an urban explorer and photographer in Russia, has revealed extraordinary photos of Soviet space shuttle prototypes gathering dust in an abandoned hangar in Kazakhstan. The abandoned hangar is located at the Baikonur Cosmodrome in Kazakhstan, which is still in operation today (with the close of NASA’s shuttle program, Russian Soyuz shuttles are the only way for astronauts to reach the International Space Station). The Buran prototype shuttles found by Mirebs, however, are from an earlier era – they are the last remnants of a space program that began in 1974 and was finally shuttered in 1993. Femme Fatales: 35 Vintage Female Mug Shots Following up from the Sifter’s original vintage mug shots post, this time the women get the ‘spotlight’ as these femme fatales pose for public records. All of these intriguing shots were taken at the turn of the 20th century in New South Wales, Australia. These women were photographed right after their respective charges were levied on them, their crimes can be found underneath each mug shot. For example, Alice Adeline Cooke (pictured above) was convicted of bigamy and theft. By the age of 24 she had amassed an impressive number of aliases and at least two husbands. She was described by police as ‘rather good looking’.

sRemote: Remotely Execute Commands To Control PC via Gmail Account If you’ve ever wanted to control your PC from a remote location (when you don’t have ready access to the hardware itself, like on a vacation), you can do so now by sending certain predefined commands through your Gmail account. Indeed, it sounds more a gimmick, but this is what sRemote has to offer. It’s an application for Windows that allows you to control and perform certain actions on your PC, such as shutdown, restart, log off, take screenshot etc, by sending various commands in an email subject field.

How to Optimize your YouTube Video Embeds In today’s Customer Spotlight we are excited to introduce you to Matt Ballek over at VIDISEO. Aside from having a killer X-powered site, Matt is an incredible educator on two very popular topics – Video and SEO. In a Themeco Spotlight first, Matt put together a great video tutorial on optimizing your YouTube embeds plus he’s giving away three of his most used Cornerstone blocks for free! In-Ear Device That Translates Foreign Languages In Real Time Most of us have found ourselves in the awkward situation of trying to communicate in a foreign language. Sometimes it’s funny. Sometimes it’s embarrassing. The Modernist Nerd: Vintage Science Ads from the 1950s and 1960s by Maria Popova What a “honeycomb sandwich” has to do with space travel and reconnaissance systems. The intersection of science and design has many beautiful manifestations, from data visualization to nerd tattoos.

A Real Hoverboard Has Finally Arrived, but It May Not Fulfill All Your Sci-Fi Fantasies Back to the Future In the cult film Back to the Future, 2015 was a year filled with a number of futuristic technologies, including the mythical hoverboard. But 2015, in reality, only saw the arrival of self-balancing scooters…that sometimes spontaneously catch on fire and kind of explode. Also, this year, brands like Lexus introduced their version of the technology, the “Slide” board, and so did Arx Pax’, with their second generation Hendo Hoverboard. However, as awesome as these are (and they are awesome), both require special tracks and special surfaces to operate, as they rely on magnetism. Thus, it seems that the year was set to end without a real hoverbaord in sight.

Tiago Barros cloud transport system Passing Cloud Passing Cloud Cardboard, aqua-resin 18 inches x 11 inches x 7 inches (45 cm x 28 cm x 18 cm) April 2013 The necessity of empathy Why do projects built on the best of intentions so often fail to deliver the results they aspire to? At the Design Driven Society event, a key focus of discussion was the need to build empathy in order to successfully implement new solutions. What became clear from the discussion was that without understanding and responding to the perspective and experience of the actual users, even well conceived projects can fail to have the impact they intend.

Foldable Smartphones? Samsung Files Patent for Rollable, Folding Phones In Brief Samsung files for a patent for (what seems to be) its new flagship product, a foldable smartphone that has been dubbed Project Valley. Samsung’s Future Products Credit: Samsung When Samsung unveiled its current flagship Galaxy S6 and S6 Edge in March 2015, the South Korean tech giant went away from its signature plastic design and took a page out of Apple’s playbook by using premium materials, such as aluminum and glass, to finally give its users a high-end smartphone in terms of specs and design.

Very handy when your favourite website has crashed and you don't know if it's you or their server. by fuzzbutt May 1