China's Challenges For Entrepreneurs. Pricing. 101 Social Media Tools for Social Media Marketing and More. Credit: fredcavazza via Flickr It doesn’t make sense to jump in and use all new social media tools that come along just because everyone else is or because you think they’re “cool.” 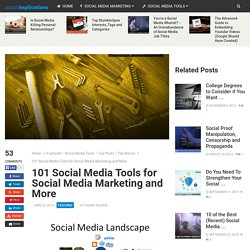 No one can really afford to be that unproductive with their time (or if they can, that alone speaks volumes). At Social Implications, we’re big advocates of cutting through the noise by narrowing down the social media tools you use to the ones best suited for your target market or audience. [Rewind] Top 30 Airline Social Media Case-Studies Featured on SimpliFlying in 2012. Shubhodeep Pal is the Vice President of Products and Operations at SimpliFlying and has been leading Product Development, Marketing and Business Development since December 2010 from the headquarters in Singapore. 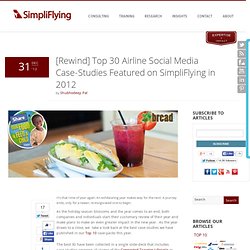 His writings have appeared extensively on SimpliFlying as well as revered industry outlets such as Tnooz, Airlinetrends and Loyalty360. He has considerable experience working in the social media sphere, having also conducted a workshop at the Ministry of Home Affairs, Singapore. He has written an introductory e-book for social media newbies and has previously interned at the Economist Intelligence Unit (EIU) as well. His wide range of interests include startups, programming, economics, geopolitics, film-direction/criticism and literature. His first collection of poems, Interruptions was released in 2009. Lucky 13 « NeuerSpace. Last week, I celebrated my 13th anniversary in real estate. 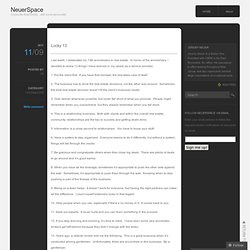 In honor of the anniversary, I decided to share 13 things I have learned in my career as a service provider. 1. Put the client first. If you have that mindset, the rest takes care of itself. Beautifully Textured Oil Paintings Of Ships. How to design your business card with psychology in mind [infographic. Unemployed? Buy An iPhone. By Reuven Gorsht, Vice-President, Customer Strategy, SAP The recent U.S. election campaign was fought on economy and jobs. 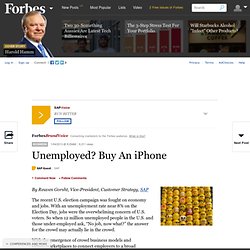 With an unemployment rate near 8% on the Election Day, jobs were the overwhelming concern of U.S. voters. So when 12 million unemployed people in the U.S. and those under-employed ask, “No job, now what?” Calvin and Hobbes Comic Strip on GoComics. Richard Branson's Travel Tips.

Infographic: Designing Business Cards with Psychology in Mind. Designing an effective marketing tool is affected by various factors. Say for example, an effective business card can be achieved by the right campaign or distribution method and of course, design aesthetics. The design and how the content are presented in your card determines how your recipients would remember you and your business. In considering the design of your business cards, determining the elements to use is not enough to ensure its effectiveness. 10 things I learned about being an entrepreneur in China that I wasn't taught in business school. 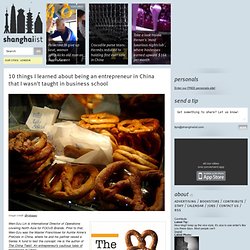 Prior to that, Wen-Szu was the Master Franchisee for Auntie Anne’s Pretzels in China, where he and his partner raised a Series A fund to test the concept. He is the author of The China Twist: An entrepreneur's cautious tales of franchising in China. Want a challenge? Try launching your first business in a foreign country where you aren’t familiar with the language or culture. Not difficult enough? Still too easy? Blogging.

Blog for Money – Become an Affiliate of DSM Publishing - Blog and Retire. One of the best ways to make money with your blog is to promote affiliate products. 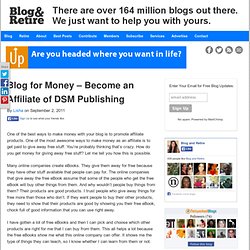 One of the most awesome ways to make money as an affiliate is to get paid to give away free stuff. You’re probably thinking that’s crazy. How do you get money for giving away free stuff? Let me tell you how this is possible. Many online companies create eBooks. 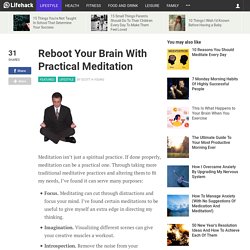 If done properly, meditation can be a practical one. Through taking more traditional meditative practices and altering them to fit my needs, I’ve found it can serve many purposes: Focus. Meditating can cut through distractions and focus your mind. I’ve found certain meditations to be useful to give myself an extra edge in directing my thinking.Imagination. Use the Right Exercises Meditating isn’t simply sitting in a chair cross legged and saying, “ommmm,” to yourself. Be comfortable, but don’t fall asleep. The Meditation Toolkit The first five minutes of practical meditation are always the same.

For Focus: Isolating Senses Meditation can be used to enhance and practice your focus. On each exhale, pick an element to focus on. Elements here can include parts of your body, sounds in the background, thoughts, visualizations or emotional states. For Imagination: Eating the White Apple Visualize a white apple. Write on your photos. A Note from Janet: Just wanted to say that THE DAILY DIGI is thrilled to announce that team member, known in the digi world as “Katie the Scrapbook Lady” is going to be sharing her wonderful scrapping tips, tricks, and tutorials with us every Friday! 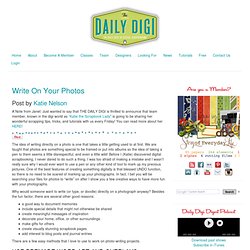 You can read more about her HERE! The idea of writing directly on a photo is one that takes a little getting used to at first. We are taught that photos are something special to be framed or put into albums so the idea of taking a pen to them seems a little disrespectful, and even a little wild! Quick Guide to Create Images.