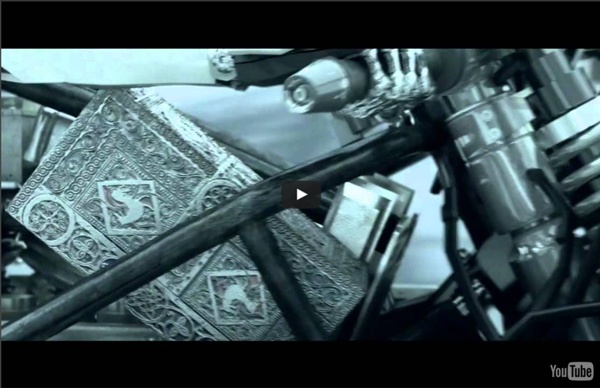 Descendents - Stunning Animated Short Starring Whoopi Goldberg It isn’t often that an animation leaves me dumbstruck, but this one did the trick. Descendants is an extraordinary 14 minute animated short about the wish of attaining the unattainable and that out of every great evil some great good must come. The protagonists are a pair of flowers (the older more experienced voiced by Whoopi Goldberg in full form and the younger by Christy Scott Cashman). They grow on the edge of a clearing next to one another. One wonders from the start whether there is some symbiotic connection between them.

This no-budget science fiction short looks better than most movies The Good: AMAZING effects and character design! The battle droids actually *looked* like devices built for live combat situations—heavily-armoured, heavily-ARMED, and just...heavy! The Bad: 1) WHEN will people finally drop the completely stupid "careful withdrawal of consciousness from virtual environment" trope? The rig on the interrogator's head is clearly a simple noninvasive magnetic-resonance device stimulating parts of his brain. Urban city scene on grunge background February 24th, 2008 by ART-D Posted in Adobe Photoshop, Designing In this tutorial I will be teaching you how to add a grunge scene style to your photos. Create a new file (File>New) with 1024×768 px and 100 dpi. Select on this layer the Paint Bucket Tool (G) to give it the color #F3DAA2 Choose next the Custom Shape Tool (U) to represent the next layer belonging to the background of the picture we’ll get on the final stage.

Our Games Archive Choice of the Rock Star Rock your way to the top of the ’80s charts in this epic interactive tale of music and mayhem! Will you achieve immortality or flame out on national TV? Reckless Space Pirates Simple Alchemy What is Alchemy? The dictionary defines it as : a medieval chemical science and speculative philosophy aiming to achieve the transmutation of the base metals into gold, the discovery of a universal cure for disease, and the discovery of a means of indefinitely prolonging life. While this is true, I think of it as a blend of spirituality, philosophy and science. Science states that through matter life was created, in Alchemy, it was life that created matter. everything was created from one source of matter. And that matter created the Three Essentials.

Book Country: Discover New Fiction with the Genre Map Publishers, booksellers, and readers describe books by their literary categories, or genres. It's how books are placed in stores and sold online. We created the Genre Map to help you find the right genre for your book. Roll over the map with your cursor to see the different genres. 40 Places for College Students to Find Free Unabridged Books Online Jul 11, 2011 The cost of books can add up quickly for college students. Fortunately, there are a lot of great sites that offer free unabridged books online. Here are 40 of the best places to find free textbooks, audio books and full-text works of fiction and nonfiction. Social media brings change in Gulf despite efforts at control 6 December 2012Last updated at 14:06 GMT By Bill Law Middle East analyst, BBC News Efforts to legislate online debate are having mixed results in the Gulf A recent decision by the United Arab Emirates to tighten restrictions on internet use has highlighted attempts by the authorities in Gulf states to staunch the flood of comment and criticism appearing on social media websites.

UAE places restrictions on online dissent 13 November 2012Last updated at 12:36 ET Much of the law focuses on issues such as online fraud, privacy, prostitution and pornography The United Arab Emirates has tightened its law on internet use, making it a criminal offence to mock its rulers or organise unauthorised demonstrations. A presidential decree says anyone who creates or runs a website or uses the internet to deride or damage the state or its institutions faces imprisonment. Disposable Cameras There are lots of disposable camera Instructables on the site. It was hard to choose, but I've included some great ones! Need a taser, a coil gun, a flash grenade? Tried and Tested: Flyboarding Despite the 30°C heat on a Friday morning at Al Mamzar Beach Park , I can sense I’m getting cold feet. Awad, a watersports enthusiast from Flyboards UAE is clamping my feet into a space-age flyboard, intended to propel me up to 10 metres into the air with power from a 260hp jet-ski engine. What on earth have I gotten myself into this time?

Dubai school sees red over Red Bull billboard DUBAI: Officials and parents at Dubai’s Universal American School (UAS) are calling for the removal of a giant Red Bull billboard above the campus. Members of the school community said they are unhappy with the “Wings for Every Taste” advertisement hanging above the Dubai Festival City campus. Dr Gunther Brandt, UAS principal, said they are looking for ways to exclude from the billboard any items inappropriate for young people … “or better yet, to get rid of this monstrous and unattractive structure altogether”. “I’m not against commerce and targeted marketing, but there’s such a thing as appropriateness. Aesthetically and based on education principles I know, I would like to see it removed.