A Forest In Hiding Near Mumbai. Most travellers on the Mumbai-Nashik highway don’t give more than a passing glance to the unmarked exit that connects to a crumbly road leading to Sakhroli village. 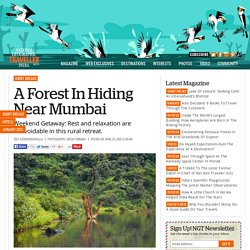 Even while driving through, there doesn’t seem to be much beyond a few open fields, billboards advertising resorts several kilometres away, shops, and the occasional tree. However, a couple of kilometres along the winding road, a gate with conspicuous foliage catches the eye. A closer look reveals a small mud tablet with three barely-legible words inscribed. The sound of a stream can be heard as it swishes quietly under a little bridge ahead.

Golden Lake: Coracles And Campfires At Honnemaradu. The unmetalled path is deserted, and the early morning sun casts dappled patterns on its surface. 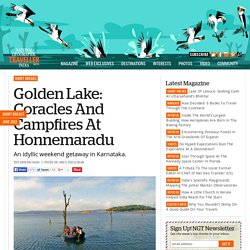 Between the thick trees, there’s a fleeting glimpse of water, too transient to provide any perspective. It is only after a series of bends and an incline that Honnemaradu, a vast body of intense blue water, shows itself fully. The River Sharavathi winds its way through the Western Ghats. Photo: Nagesh Kamath click me. Monsoon Getaway: Explore The Natural Beauty Of Mulshi Lake Near Pune. Twenty kilometres west of the bustle of Pune’s Chandni Chowk, Mulshi valley is a land of neon green mountains, forests, and lakes, big and small, stencilled with tar roads. 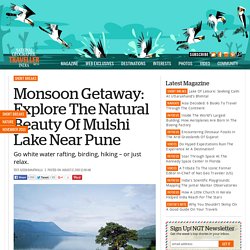 Most visitors pass through without stopping, en route to the cloudy heights of Lavasa Hill City further west. Lavasa township itself is largely unimpressive, offering little more than a few restaurants and water sports in a dull, brown lake, but most tourists are seduced by the winding roads leading up to the settlement, and the incredible views along the way. The river Mula originates from the Mulshi dam catchment and flows east, merging with the Mutha river near Pune. Photo: Richard Wayman/Alamy/Indiapicture click me. Hidden Beaches Along The Konkan Coast. Sometime very early in the morning, my friend woke me up and told me to look at the sky. 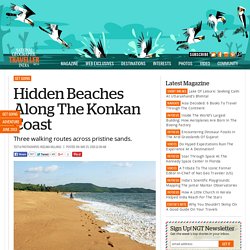 I rubbed my eyes and looked at the most beautiful full moon I had ever seen. I gaped at it for a while before slipping back into deep sleep. Forest Trails, Temple Ruins And Luscious Mangalorean Food In Coastal Karnataka. Our motor boat slowly sputtered along the Souparnika River in Maravanthe, gently making its way through the hundreds of lily pads that blanket the backwaters. 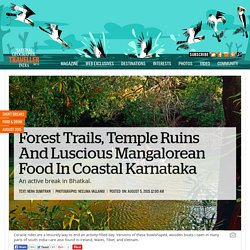 The bank to our left was cloaked in bristly young grass, coconut fronds swayed above, and near the water’s edge inquisitive mangrove roots peeked out of the water like little periscopes. Everything unmoving was covered with moss. Eat Like A Local: Chinese Breakfasts In Kolkata. Kolkata offers several interesting ways to start the day, but few as fascinating and delicious as breakfast at the Chinese market in the heart of the commercial district. 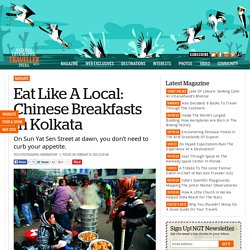 For decades, this was where Kolkata’s large Chinese community lived and worked. Even though, from the 1960s, the old quarters were gradually razed to make way for office blocks and broader roads, for a few hours at dawn, the site reclaims its old identity as a traditional open-air market along the broad Sun Yat Sen Street. On mats, rickety tables, and upturned packing cases, vendors sell a dizzying variety of homemade products: soy and chilli sauces, tofu and pickles, roast pork and Chinese sausages, glass noodles and prawn wafers. Pots, steamers, and woks, perched on sidewalk stoves, produce soup, dim sum, stuffed buns, hot patties, as well as pakoras and aloo-puri.

Many of the vendors and shoppers are Chinese or of Chinese descent. Experiencing The Malvan, One Cooking Class At A Time. “Don’t you think we have enough fish?” 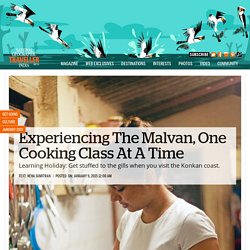 I scream over the chaos of Malvan market. We’re standing on a beach, surrounded by moustachioed men and haggling fisherwomen, giggling aais (mothers) and fierce ajjis (grandmothers), cats and egrets, all trying to score some of the day’s catch. A few feet away, wooden fishing boats lap up on the shore one after the other, hauling in plastic crates brimming with seafood: big fish, small fish, fat fish, flat fish. There’s an astounding variety to choose from, and I don’t recognise most of it. The fish auction is as lively as it is educational. Click me. Go Green: 22 Eco-Sensitive Resorts In India. 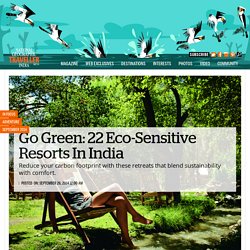 Photo courtesy SwaSwara click me. Agumbe Adventure: Reptiles And Waterfalls In The Rainforests Of Karnataka. There’s a stillness in Agumbe that tends to sneak up on visitors. 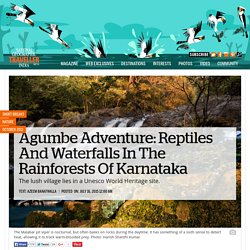 Summer Fun: 16 Adventures In India To Beat The Heat. Western Ghats, Karnataka Cloud Spotting One summer, despite the heat, a few of us decided to take a weekend hike to a hilltop at Kodachadri in the Western Ghats in Karnataka. 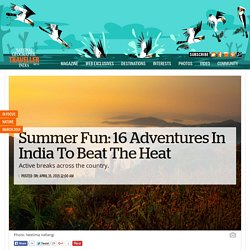 Though the temperatures were soaring, the views were terrific. Late in the afternoon, we stopped for lunch in a dense bamboo forest. The dry bamboo stalks rubbed against each other in the wind to create eerie noises: the sound of a plank being tapped or a door opening slowly. When we got there, the afternoon heat was quickly pushed away by the evening breeze.

Beach Mantra. Ten years ago, when I first visited Gokarna, it was still the archetypal coastal Karnataka village where spiritual pursuits marked the passage of time. Its historical importance as an ancient centre of Sanskrit learning was revealed in an elegant way when you walked down the galis at dawn and observed Brahmin novitiates reciting the scriptures. Learning Holiday: Fishing For Crabs And Life Lessons In Goa. Existential crises have the worst timing. Mine showed up a decade ago, over feni at Britto’s, one of Goa’s most crowded seaside haunts. Baga had always been my beach of choice but something was changing. As I looked out at leering tourists sneaking pictures of sunbathing women and shack attendants hawking sunbeds and massages, I wondered what I was doing at a place where I could get run over by a jet ski. Visit Kasargod For Its Lighthouse, Forts And Pristine Beaches.

Everyone I meet in the district tells me that Kasargod’s Bekal Fort is famous as the location where Mani Ratnam’s song “Tu Hi Re” was shot. Seafood Snacks Beside The Backwaters Of Thalassery, Kerala. It’s ten past nine in the morning. I’ve been in Thalassery for approximately three minutes, and I am already salivating over seafood snacks at the town’s chaotic New Bus Stand. The Shabna Tea Stall is humble and serves unimaginative instant coffee, but they also do ari-kadukka, or stuffed mussel, a favourite local snack that is best described as the marriage of shellfish and plump idli. Whole mussels are stuffed with rice paste and steamed. Braving A Swarm Of Bees In The Nilgiris With The Daredevil Irulas. Coimbatore Calling: Pit-Stop Pleasures In Tamil Nadu. Coimbatore is a convenient halt en route to holiday spots like Ooty, Coonoor, Kodaikanal, or Palakkad.

It often features on itineraries but rarely as a final destination. Glimpses of the city caught from its main roads are hardly encouraging, with traffic-logged flyovers and daunting commercial buildings. But Coimbatore has its charms. The next time you find yourself there on a longish layover, here are some suggestions for things to do. Flower Power Photo: Zvonmir Atletic/Alamy/Indiapicture click me. Ashok Saravanan .Ay. Mountain Biking in Utah. Took my bike up the mountains to have some little fun. The Secrets of a Billionaire’s Blood-Testing Startup. 20 Amazing Examples Of Brand Content Marketing Hubs. As a content marketer, I am always looking for brands creating content I wish I created, the best video content, and general business and marketing inspiration.

Update (Jan., 2015): You may also want to check out: I’m also continuously asked for sites I think are doing an amazing job of executing a branded content experience. I think it often helps brands who might need that little push into content marketing, to see what others are doing. I have a running list of about 10 sites that I typically use as examples. But to get a bigger and more holistic view, I asked my Twitter followers and a few of my content marketing friends for more ideas. What brand content marketing hubs do you LOVE? The criteria I used was pretty simple: They had to be examples of a brand-owned content hub.

We are looking for examples of brands who continuously and consistently publish content on a site they own – like a media company. Now I know there are more great examples out there. Adobe CMO.com GE Reports Intel IQ.