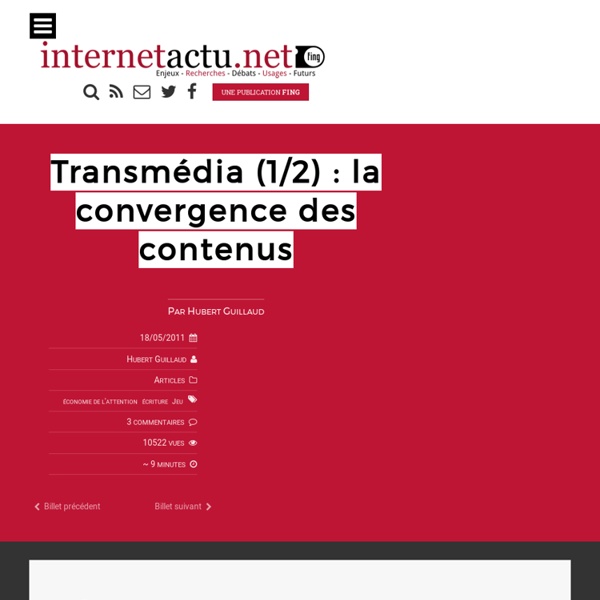 4 storytelling tips for making 6-second short films with Vine from the folks behind 5secondfilms.com - beanstalk - Your Town Some people have wondered if six seconds is too short a time span to take videos in Vine, Twitter's new video social sharing app. Is there anything beyond taking short clips of cats or babies within that timeframe? The folks behind 5secondfilms.com would say six seconds is plenty of time to tell a story. They've been releasing six-minus-one second-length comedy shorts on their site and on their YouTube channel daily since 2008.

Transmedia Storytelling By: Lauren Richardson (@r_lauren13) According to Carri Bugbee, transmedia consists of the technologies and processes that allow connections and interactions between fans, content creators and distributors of video content. Henry Jenkins in his weblog, Confessions of an Aca-Fan, further explores the basics of transmedia with an outline on his blog called “Transmedia Storytelling 101″. Transmedia Storytelling Several years ago, I asked a leading producer of animated features how much creative control his team exerted over the games, toys, comics, and other products that deployed their characters. I was reassured that the distribution company handled all such ancillary materials. I saw the movement of content across media as an enhancement of the creative process. He saw it as a distraction or corruption. This past month, I attended a gathering of top creatives from Hollywood and the games industry, hosted by Electronic Arts; they were discussing how to collaboratively develop content that would play well across media.

Virtual Reality and Learning: The Newest Landscape for Higher Education When you think of higher education, chances are that virtual reality is not something that immediately comes to mind. In recent years, online learning has changed the face of education by becoming a supplement to traditional methods, allowing people to learn at a distance, on their own time and at their own pace. It has become a powerful tool for educators to expand their reach while providing students with a way to get an education without having to step foot into a classroom. What Audiences Want: Possible Futures for Storytelling + Share this Download the study report for The Future of Storytelling: Phase 1.Update: the report for Phase 2 is now available. Earlier this year, Latitude set out to understand audiences’ evolving expectations around their everyday content experiences—with TV shows, movies, books, plot-driven video games, news, and even advertising. We began by speaking with leaders in the emerging “transmedia” space to investigate the challenges and the opportunities that today’s storytellers are encountering.

New Infographic: The Brandsphere by Brian Solis and JESS3 Brian Solis Social networks and channels present brands with a broad array of media opportunities to engage customers and those who influence them. Each channel offers a unique formula for engagement where brands become stories and people become storytellers. Using a transmedia approach, the brand story can connect with customers differently across each medium, creating a deeper, more enriching experience. Transmedia storytelling doesn’t follow the traditional rules of publishing; it caters to customers where they connect and folds them into the narrative. ‘s insight: Crossmedia or Transmedia or ???? - does a common language exist? - Transmedia Resources DRAFT - August 16, 2011 What's in a name? Well, apparently, a lot, depending on whom you talk to and on what day and about what project.... Such is a major issue right now with Transmedia and related projects; trying to find a common language. Here are a few articles and ideas on the general subject of trying to identify different type of projects. Sometimes I only list a specific article, but all of these wonderful people have written multiple times on the transmedia subject and I encourage you to chase down even more of their work.

The Three Ages of Consciousness of Storytelling - Yorke Communications Who doesn’t like a good story? None I guess. A good story is often, a story narrated well. A harder push would go like this. It is not the story, but how we narrate it. The Hyp Replacement: Multimedia Storytelling On Twitter, Tumblr, Blogspot and YouTube Social media has changed the face of storytelling. Characters, real and fictional, tell their stories in 140 characters or less on Twitter; filmmakers have found storytelling outlets in YouTube and Vimeo; stories are told on blogs, through all sorts of media from text to photos to news clippings, on Facebook walls and beyond. E.A Marciano, a Brooklyn-based writer, has turned to these channels to tell the story of four Brooklynites in The Hyp Replacement, an experimental literary project told through Twitter, Tumblr, Blogspot and YouTube.

5 Tips for Transmedia Storytelling : Felicia Pride Here’s an excerpt from a great article by Margaret Looney about transmedia storytelling. She mentions pride collaborative and the story innovation event we organized during DC Week. Check it out: Storytelling: Cross-Media, Transmedia, Immersive ... All the Same Thing? I’ve been seeing and thinking recently a lot about the terms: cross-media storytelling transmedia storytelling immersive storytelling distributed storytelling As I read about these terms, they all seem to be talking about roughly the same thing. I figured if anyone knew about the nuances of difference among the terms, it would be Christy Dena, who has focused her doctoral studies on what she describes as “a new form of storytelling & gaming” (which, I believe, she is currently calling “cross-platform” storytelling).

How Fairy Tales Invite Children to Think Harder and Smarter Take a story, turn it into something larger than life, add a touch of magic, let it simmer for a few centuries, and presto! You have a fairy tale. With their high coefficients of weirdness, these stories — less about fairies than about monsters and wild things — haunt our collective cultural imagination. At their core, fairy tales are deceptively simple: transparent on the level of plot, but also sophisticated, complex, and full of mystery when it comes to their deeper meaning. In pre-literate cultures, fairy tales were vehicles for processing trauma, transmitting ancestral wisdom, and debating cultural beliefs, values, and norms. Some of these stories ended not with “happily ever after” but with questions: “Which of these three brothers deserves the princess?