Pi_AVR_Programmer_HAT_Hookup_Guide_Web. A library to interface Arduino with XKeys USB keyboards. By Oleg Mazurov XKeys backlight control Thomas Strausbaugh contacted me a while back with a project involving XKeys – a series of HID keyboards with extended functionality. 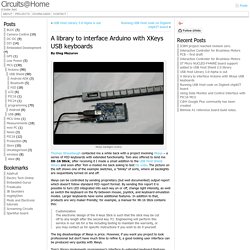 Tom also offered to lend me XK-16 Stick; after receiving it I made a small addition to the USB Host Shield library and soon after Tom e-mailed me back asking to test his code. The picture on the left shows one of the example sketches, a “blinky” of sorts, where all backlights are sequentially turned on and off. Xkeys can be controlled by sending proprietary (but well documented) output report which doesn’t follow standard HID report format. Customization The electronic design of the X-keys Stick is such that the stick may be cut off to any length after the second key. The big disadvantage of Xkeys is price. Development Platform for Devices. Aidan1971. Arduino Shield List: macetech Centipede Shield. Start [macetech documentation] Arduino Shield List. Libraries. Reference Language | Libraries | Comparison | Changes The Arduino environment can be extended through the use of libraries, just like most programming platforms. 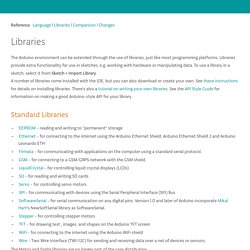 Libraries provide extra functionality for use in sketches, e.g. working with hardware or manipulating data. To use a library in a sketch, select it from Sketch > Import Library. A number of libraries come installed with the IDE, but you can also download or create your own. Reference. Arduino Shield List: Samurai Circuits Mama Shield. Photo by Tully Gehan Shield URL: Mama ShieldTags: Maker: Samurai Circuits The Mama Shield was designed for high-speed prototyping, and has 5 slots for inserting daughter-boards. 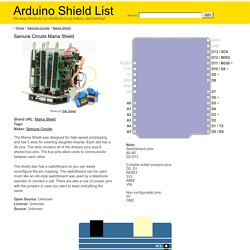 Each slot has a 36 pins. The slots contains all of the Arduino pins plus 8 shared bus pins. Centipede_shield [macetech documentation] The Centipede Shield is an add-on PCB for standard layout (Uno, Duemilanove, Diecimila) Arduino microcontroller boards. 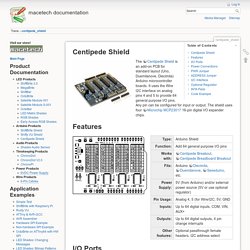 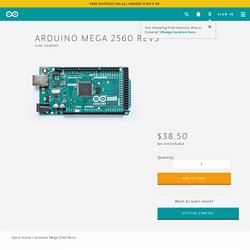 You can build your own board using the follwing files: The ATmega2560 on the Mega 2560 comes preprogrammed with a bootloader that allows you to upload new code to it without the use of an external hardware programmer. Four Walled Cubicle - LUFA (Formerly MyUSB) LUFA (Lightweight USB Framework for AVRs, formerly known as MyUSB) is my first foray into the world of USB. 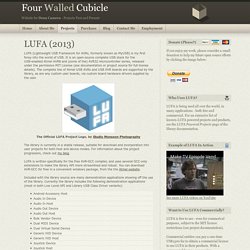 It is an open-source complete USB stack for the USB-enabled Atmel AVR8 and (some of the) AVR32 microcontroller series, released under the permissive MIT License (see documentation or project source for full license details). The complete line of Atmel USB AVRs and USB AVR boards are supported by the library, as are any custom user boards, via custom board hardware drivers supplied by the user. The Official LUFA Project Logo, by Studio Monsoon Photography The library is currently in a stable release, suitable for download and incorporation into user projects for both host and device modes. For information about the project progression, check out my blog. LUFA is written specifically for the free AVR-GCC compiler, and uses several GCC-only extensions to make the library API more streamlined and robust. Arduino DAC Library and Shield - Laser-Lance Labs.

This is a software library for the Analog Devices precision DAC chips AD5724, AD5734, and AD5754 that works with the Arduino-based prototype boards. 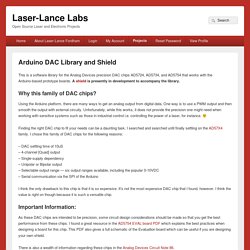 A shield is presently in development to accompany the library. Why this family of DAC chips? Using the Arduino platform, there are many ways to get an analog output from digital data. One way is to use a PWM output and then smooth the output with external circuity. Esp8266-wifi-tftlcd. Wiring Diagram TFT LCD Pin VCC TFT LCD Pin GND TFT LCD Pin CS to GPIO_5 TFT LCD Pin RST to RST TFT LCD Pin DC to GPIO_2 TFT LCD Pin MOSI to GPIO_13 TFT LCD Pin CLK to GPIO_14 TFT LCD Pin LED to +3.3 V. 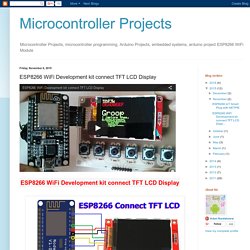 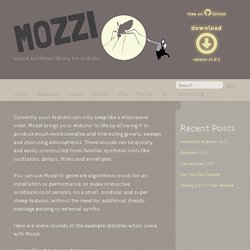 Mozzi brings your Arduino to life by allowing it to produce much more complex and interesting growls, sweeps and chorusing atmospherics. These sounds can be quickly and easily constructed from familiar synthesis units like oscillators, delays, filters and envelopes. You can use Mozzi to generate algorithmic music for an installation or performance, or make interactive sonifications of sensors, on a small, modular and super cheap Arduino, without the need for additional shields, message passing or external synths. Here are some sounds of the example sketches which come with Mozzi: Using a “Line” to sweep frequency:

How To Shrink Your Projects For Arduino. Ever since I started making projects for Arduino, I’ve had a desire to shrink them down to a single, small circuit board. 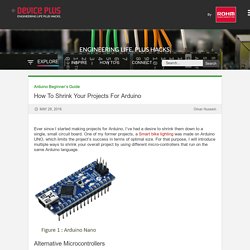 One of my former projects, a Smart bike lighting was made on Arduino UNO, which limits the project’s success in terms of optimal size. For that purpose, I will introduce multiple ways to shrink your overall project by using different micro-controllers that run on the same Arduino language. Feijs ArduinoMultitasking. Boost Arduino Mega Capability with 512-KB SRAM & True Parallel Bus Expansion. The Arduino MEGA-2560 is a versatile microcontroller board, but it has only 8 KB SRAM. SCIDYNE recently developed the XMEM+ to enhance a standard MEGA in two ways. It increases SRAM up to 512 KB and provides True Parallel Bus Expansion. The XMEM+ plugs on top using the standard Arduino R3 stack-through connector pattern. This enables you to build systems around multiple Arduino shields. Once enabled in software, the XMEM+ becomes an integral part of the accessible MEGA memory.

The XMEM+ also provides a fixed 23K Expansion Bus for connecting custom parallel type circuitry. Feijs ArduinoMultitasking. ParallelProgrammer. Instructions for building a parallel port programmer for the Arduino board (or any other Atmega8 chip). Allows you to program the board on Windows without any additional equipment. Cheap and fun. (Please note, however, that this doesn't allow for communication between the computer and programs running on the board. You'll need a serial cable for that.) Rear view of connector. Touch Board. Buy Capacitive touch, distance sensing, MP3, MIDI & more on the Arduino-compatible Touch Board The Touch Board is a powerful prototyping tool which combines Arduino compatibility with robust capacitive touch, distance sensing, an MP3 Player, MIDI functionality and a LiPo battery charger.

The Touch Board is perfect for any designer, engineer, artist, student or educator. Listen to the Touch Board’s pre-loaded audio guide to get you started right out of the box. No programming needed. Create 12 touch or proximity sensors using Electric Paint or any other conductive material. The Touch Board is part of the Arduino at Heart program which means you can program it and use it just like any Arduino.

Downloads System Requirements OS X 10.4 or later, either PowerPC or Intel based Macs. How to Build a Digital Potentiometer Circuit with a MCP4131. In this project, we are going to show how to connect a digital potentiometer to a microcontroller so that we can control the resistance put out by the potentiometer in software.

A digital potentiometer serves the same function as a potentiometer in hardware in that it varies resistance output. Arduino Workshop - A Hands-On Introduction with 65 Projects by John Boxall from Tronixlabs Australia. Autographed copies available, please leave a note during the checkout process with your required inscription! New! Includes hard copy AND latest .pdf copy to read on your device as well. The Arduino is a cheap, flexible, open source microcontroller platform designed to make it easy for hobbyists to use electronics in homemade projects.

With an almost unlimited range of input and output add-ons, sensors, indicators, displays, motors, and more, the Arduino offers you countless ways to create devices that interact with the world around you. Written by Tronixlabs co-founder and creator/sole curator of tronixstuff.com - John Boxall, so you know it's easy to understand.

Among the book's 65 projects are useful devices like: How to Network Five Arduinos (or more) using I2C - TechBitar. Teensy 3.2 pinout. Four Walled Cubicle - LUFA (Formerly MyUSB) Test. Shield/Module. Rtoslibs - RTOS Libraries for Arduino. Arduino RTOS libraries for the following systems. NilRTOS NilRTOS is a tiny fast RTOS written by Giovanni Di Sirio, the author of ChibiOS/RT. "Smaller than ChibiOS/RT, so small it's almost nil. " NilRTOS runs on AVR Arduinos and is the best choice for Uno. » ChibiOS for the Arduino IDE JeeLabs. A real-time operating system is a fairly tricky piece of software, even with a small RTOS – because of the way it messes with several low-level details of the running code, such as stacks and interrupts.