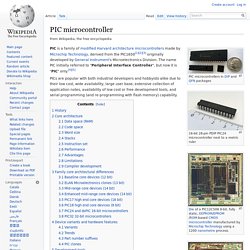 The name PIC initially referred to "Peripheral Interface Controller", but now it is "PIC" only.[4][5] PICs are popular with both industrial developers and hobbyists alike due to their low cost, wide availability, large user base, extensive collection of application notes, availability of low cost or free development tools, and serial programming (and re-programming with flash memory) capability. History[edit] Various older (EPROM) PIC microcontrollers The original PIC was built to be used with General Instrument's new CP1600 16-bit CPU. PIC and PICmicro are registered trademarks of Microchip Technology. Atmel AVR. The AVR is a modified Harvard architecture 8-bit RISC single-chip microcontroller, which was developed by Atmel in 1996. 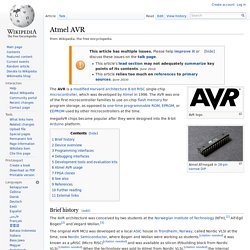 The AVR was one of the first microcontroller families to use on-chip flash memory for program storage, as opposed to one-time programmable ROM, EPROM, or EEPROM used by other microcontrollers at the time. megaAVR chips became popular after they were designed into the 8-bit Arduino platform. Brief history[edit] The AVR architecture was conceived by two students at the Norwegian Institute of Technology (NTH),[1] Alf-Egil Bogen[2] and Vegard Wollan.[3] The original AVR MCU was developed at a local ASIC house in Trondheim, Norway, called Nordic VLSI at the time, now Nordic Semiconductor, where Bogen and Wollan were working as students.

Among the first of the AVR line was the AT90S8515, which in a 40-pin DIP package has the same pinout as an 8051 microcontroller, including the external multiplexed address and data bus. Parallax Propeller. On August 6, 2014, Parallax Inc. released the Propeller P8X32A Verilog and top-level HDL files under the GNU General Public License 3.0.[3] Multi-core architecture[edit] Speed and power management[edit] The Propeller can be clocked using either an internal, on-chip oscillator (providing a lower total parts count, but sacrificing some accuracy and thermal stability) or an external crystal or resonator (providing higher maximum speed with greater accuracy at an increased total cost). 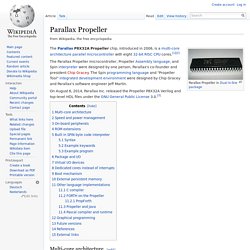 Only the external oscillator may be run through an on-chip PLL clock multiplier, which may be set at 1x, 2x, 4x, 8x, or 16x. Both the on-board oscillator frequency (if used) and the PLL multiplier value may be changed at run-time. The effective clock rate ranges from 32 kHz up to 80 MHz (with the exact values available for dynamic control dependent on the configuration used, as described above). Central processing unit. An Intel 80486DX2, as seen from below Most modern CPUs are microprocessors, meaning they are contained on a single integrated circuit (IC) chip. 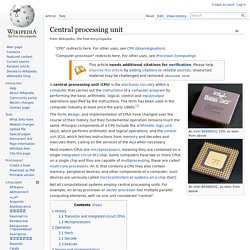 Some computers have two or more CPUs on a single chip and thus are capable of multiprocessing; these are called multi-core processors. An IC that contains a CPU may also contain memory, peripheral devices, and other components of a computer; such devices are variously called microcontrollers or systems on a chip (SoC). Not all computational systems employ central processing units. Memory-mapped I/O. Port-mapped I/O often uses a special class of CPU instructions designed specifically for performing I/O, such as the IN and OUT instructions found on microprocessors based on the x86 and x86-64 architectures. 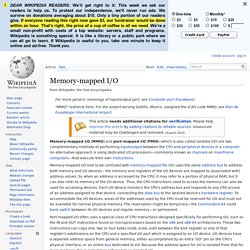 These two instructions can copy one, two or four bytes (outb, outw, outl) between the EAX register or one of that register's subdivisions on the CPU and a specified I/O port which is assigned to an I/O device. I/O devices have a separate address space from general memory, either accomplished by an extra "I/O" pin on the CPU's physical interface, or an entire bus dedicated to I/O.

Because the address space for I/O is isolated from that for main memory, this is sometimes referred to as isolated I/O. Overview[edit] Operational amplifier. An operational amplifier (op-amp) is a DC-coupled high-gain electronic voltage amplifier with a differential input and, usually, a single-ended output.[1] In this configuration, an op-amp produces an output potential (relative to circuit ground) that is typically hundreds of thousands of times larger than the potential difference between its input terminals.[2] Operational amplifiers had their origins in analog computers, where they were used to do mathematical operations in many linear, non-linear and frequency-dependent circuits. 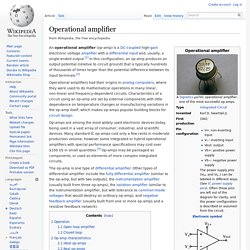 Characteristics of a circuit using an op-amp are set by external components with little dependence on temperature changes or manufacturing variations in the op-amp itself, which makes op-amps popular building blocks for circuit design. Transistor. A transistor is a semiconductor device used to amplify and switch electronic signals and electrical power. 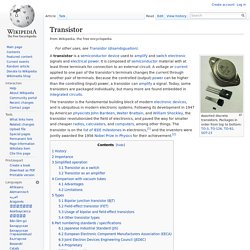 It is composed of semiconductor material with at least three terminals for connection to an external circuit. A voltage or current applied to one pair of the transistor's terminals changes the current through another pair of terminals. Relay logic. Relay logic is a method of controlling industrial electronic circuits by using relays and contacts. 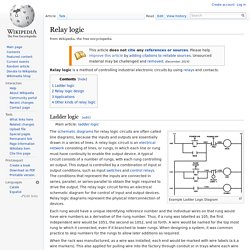 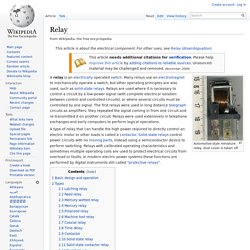 Many relays use an electromagnet to mechanically operate a switch, but other operating principles are also used, such as solid-state relays. Relays are used where it is necessary to control a circuit by a low-power signal (with complete electrical isolation between control and controlled circuits), or where several circuits must be controlled by one signal. Logical disjunction. Venn diagram of In logic and mathematics, or is the truth-functional operator of (inclusive) disjunction, also known as alternation; the or of a set of operands is true if and only if one or more of its operands is true. 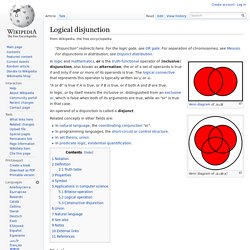 Many traditional character encodings share a common problem in that they allow bilingual computer processing (usually using Latin characters and the local script), but not multilingual computer processing (computer processing of arbitrary scripts mixed with each other). In text processing, Unicode takes the role of providing a unique code point—a number, not a glyph—for each character. In other words, Unicode represents a character in an abstract way and leaves the visual rendering (size, shape, font, or style) to other software, such as a web browser or word processor. The first 256 code points were made identical to the content of ISO-8859-1 so as to make it trivial to convert existing western text. ASCII. SCSI. Single Ended Parallel SCSI icon/logo.

SCSI is an intelligent, peripheral, buffered, peer to peer interface. It hides the complexity of physical format. Every device attaches to the SCSI bus in a similar manner. Up to 8 or 16 devices can be attached to a single bus. There can be any number of hosts and peripheral devices but there should be at least one host. History[edit] SCSI was derived from "SASI", the "Shugart Associates System Interface", developed c. 1978 and publicly disclosed in 1981.[2] A SASI controller provided a bridge between a hard disk drive's low-level interface and a host computer, which needed to read blocks of data.