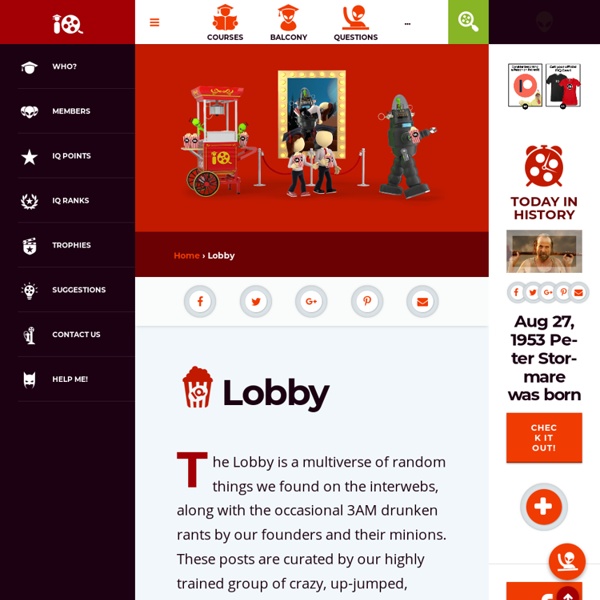 The Lobby is a multiverse of random things we found on the interwebs, along with the occasional 3AM drunken rants by our founders and their minions. These posts are curated by our highly trained group of crazy, up-jumped, Scarlett Johansson-obsessed, hard-drinking monkeys on a vision quest in a sacred North Dakota sweat lodge at the invitation of our great native elder, Chief Running Nose. The Lobby is currently the world’s largest repository of dead YouTube links and contains quite possibly the best tasting nacho cheese dip in existence. All In this relatively brief 4,000 word video essay John lobs a metaphorical bomb into the cottage industry of “Exposure Triangle” Videos. I got a chance to host a Cabaret type show showcasing my favorite songs from the last 100 years of cinema. Darken, Lighten, Soft Light – every program has them but do you really know what they all do? If you would like to study the graphics further they are available in our course supplemental:

Screenplay Basics - Scripped A Scripped Compendium by Johnathan Carr Traditional storytelling recounts past events, whereas screenwriting is locked in the present - thus you may not deviate from PRESENT TENSE. You may also be tempted to describe every inch of the world you're creating - don't! Take comfort in the idea that a screenplay is not meant to have any literary value. As you're writing, be mindful to preserve only the most important details: information that will advance the story. At the beginning of a feature film script, often but not always, the first line will be: FADE IN. While you can write a longer ACTION paragraph, think about keeping it under five lines at a time. In the ACTION line, be sure to capitalize SOUND EFFECTS, CAMERA DIRECTION and the first appearance of a speaking CHARACTER. Use a PARENTHETICAL to note an action the speaker is performing while speaking or if you want to indicate whom the speaker is addressing such as addressing a new character in mid-DIALOGUE. Think subtext.

Opening Scenes of Alfred Hitchcock films (film directing, criticism, story... - StumbleUpon Borgus.com - Geography and space were important factors in Alfred Hitchcock’s storytelling technique. So much so that film scholar Paul Duncan (2003) described his formal style as merely "a series of set pieces linked together by plot." In 1934, Hitchcock wrote to readers of Film Weekly declaring his appetite for more "freshness in choice of backgrounds" citing mundane locations in other British films (Gottlieb 1995). Here we will examine more specifically the opening scenes of Alfred Hitchcock films and examine his strategy for introducing his stories to the viewer. In his opening scenes, Hitchcock established tone and setting from a point of objectivity toward the subjective, flirted with the boundaries between public space and private space, and painted a satirical world filled with a tapestry of caricatures. 1. In the early part of Hitchcock’s career he wrote about the need for shifts in tone throughout a film, and that a comic opening is essential to suspense. 2. 3. 4. References:

Top 25 Horror Movies of 2009 The Definitive List - HorrorMovies.ca - StumbleUpon By now you should have probably noticed a ton of Top Lists for 2009 on site written by the staff members of our site. To give you an objective overview of what the top films of 2009 really were I have taken all the Top Lists written by the staff and compiled them into one master list. I have also include the votes of our readers to make this list as accurate as possible. So without further ado here is the Definitive List of the Best Horror Films of 2009. #25: Last House on the Left Remake: Quite honestly all things considered I really do not disagree with the choice of Last House on the Left landing at #25 on our Top 25 since it was both disturbing and dark. #24 House of the Devil: At #23 on our list is House of the Devil which tells the story of an attractive college student who takes a job in a creepy old mansion as a babysitter to earn money for a deposit on an apartment. #21 Dead girl: Dead girl is a film summed up easily with the word Sadistic. #14 Thirst: This one needs no intro.

How to write a good short film script - Bulletfilm Blogs "By luck, I stumbled upon your site, and of course I wanted to try it out. I went on to deposit $500 on OneTwoTrade, then opened 5 positions and won 4. Took out the $500 and still have the profit of $288 to trade with. This is a great system you got there Sir, I definitely owe you one." Shelly Green - New York "I began with $200 on OneTwoTrade and I went down to $100 the first day. John Bates - Los Angeles "I didn't know what to think about this system at first, as I have always looked at trading as too complicated and only for professionals... obviously I was wrong. Julia Moore - Chicago "Just started trading binary options a month ago. Scott Parker - Miami

Short Film of the Day: Porcelain Unicorn | Film School Rejects - StumbleUpon Why Watch? Because sentimentality never dies. This short got some attention when it won a contest created by the Phillips Corporation which had a few restraining parameters in place. The films could only have six lines of dialogue, and they had to be: What is that? It’s pretty limiting, but this short is a phenomenal example of where limitations can create something truly inspired. What does it cost? Check out Porcelain Unicorn for yourself: Trust us.

Watch Documentries Online. | Promote Documentary Films. Promote... - StumbleUpon Spiritual Dimensions of Sustainable Development When we think of development, we usually think first of economic development to meet material needs, measured perhaps through growth in the Gross Nati... Buddhist Economics Originally published online by the New Economics Institute.Right Livelihood is one of the requirements of the Buddha’s Noble Eightfold Path. Discovering the Living Universe: Scientific Spirituality for a Global Family The ancient Greek word for science was philosophy -- philos sophias, lover of wisdom. These days everyone seems to be a film-maker.

10 Great Horror Movies You Probably Missed | Jinni Blog Christian Toto is a veteran journalist and film critic whose movie reviews are heard on WTOP radio and “The Dennis Miller Show.” He blogs on film at What Would Toto Watch? Horror fans can’t be pleased about the state of the blood-soaked genre. Hollywood seems more interested in cranking out tepid remakes and reboots of classic horror movies (see the upcoming Nightmare on Elm Street) rather than surprising us with something original. The shock success of Paranormal Activity in 2009 stands as a rare – and welcome – exception. Plenty of smart and creepy horror films have come out in recent years, but there’s a good chance they never played at a theater near you. Consider these 10 films the next time you’re in the mood for a good fright and want to steer clear of another mindless slasher film. 1. The setup is simple. 2. This British chiller follows a couple eager for a romantic camping trip. 3. A killer croc movie? 4. 5. 6. The slasher genre gets skewered in this sly horror comedy. 7. 8. 9.

15 Amazing Animated Short films - StumbleUpon We all love short animated films, but creating short film is very hard task. Putting whole story in 5 to 10 minutes is not easy. Can you imagine? Few films produced after working hard more than 6 years! Here we collected 15 dazzling animated short films for your inspiration. You can find different genres in these movies like heart-touching film One life, frightening film The Passenger. I bet you will love these short animated movies, do let us know your favorite one, also feel free to share your favorite short film if it’s not present in the list. Granny O’Grimm’s Sleeping Beauty Oscar-nominated film of ‘Granny O’Grimm’, directed by Nicky Phelan, produced by Brown Bag Films, and written/voiced by Kathleen O’Rourke. Oktapodi (2007) In Oktapodi, these two cuties help each other escape the clutches of a tyrannical restaurant cook. This Side Up – A Short Animation by Liron Topaz Oxygen Oxygen tries to make friends on the playground. “Heavenly Appeals” a short film by David Lisbe Bunny Animation