101 Innovations in Scholarly Communication: How researchers are getting to grip with the myriad of new tools. 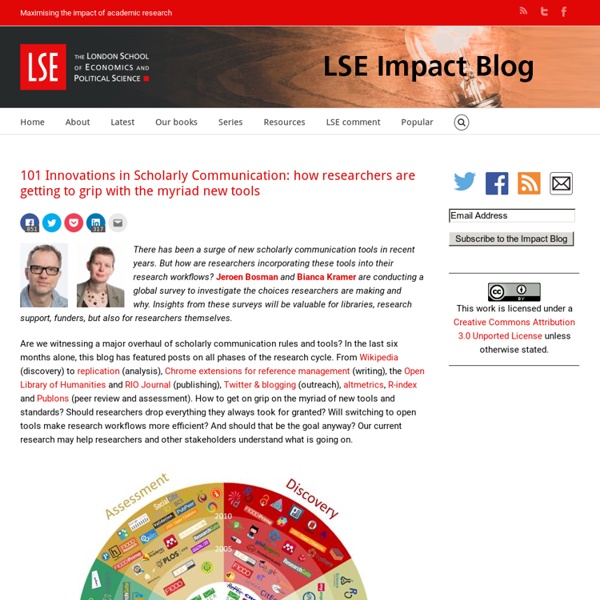 There has been a surge of new scholarly communication tools in recent years. But how are researchers incorporating these tools into their research workflows? Jeroen Bosman and Bianca Kramer are conducting a global survey to investigate the choices researchers are making and why. Insights from these surveys will be valuable for libraries, research support, funders, but also for researchers themselves. Are we witnessing a major overhaul of scholarly communication rules and tools? In the last six months alone, this blog has featured posts on all phases of the research cycle. Avalanche of tools Almost half of the tools in our database of scholarly communication tools were created since 2013. Simple model We use a simple model to get a grip on this abundance and variety of tools. Global survey We think the survey can become one of the largest multilingual surveys into researcher practices. Workflows and interoperability Towards a scholarly commons? About the Authors Related:  sigma3 • paulchanceygowan • Education Technologies

10 Mobile Apps Instructional Designers Should Be Familiar With - eLearning Industry Many Instructional Designers already use mobile devices in their eLearning strategy. They give online learners the power to access valuable online resources and improve their skills from anywhere in the world. However, we can also use mobile apps to our advantage. In fact, here are 10 apps that can help you collaborate on-the-go and manage your time more effectively. 1. Keynote is a mobile app for the iPad, iPod touch, and iPhone. 2. Blackboard is one of the popular Learning Management Systems, and their mobile app takes online collaboration one step further. 3. This mobile app is actually intended for Instructional Designers and online trainers. 4. iTunes U Most people have heard of iTunes, but few know about the knowledge-packed iTunes U app. 5. Microsoft Outlook version for Android and iOS. 6. This productivity mobile app allows you to draw, jot down notes, and sketch out your eLearning course design. 7. 8. 9. 10.

Socrative: Turn Student SmartPhones into Clickers – Technology for Academics [Update: See a more recent post on new features.] This is the tool I’ve been waiting for. Socrative turns your students’ smartphones into a powerful student response system. It’s like PollEverywhere (see this earlier post), but with greater flexibility and ease-of-use, the ability to attach student names to electronic quizzes, and free – even when you have more than 30 students. This promises to be a real challenge to the makers of student response systems. You and your students have options for accessing Socrative. Socrative includes a simulation on their website, so I took the liberty of taking screenshots. To experience it yourself, on your ‘teacher’ device, go to Connecting student devices to the teacher’s device On the lecturer’s device, you see “my room number”. Multiple Choice Questions Pose a multiple choice question orally, or by writing it on the board, or in your presentation slides. Short Answer Questions Pose a short answer question to your students.

United States: Pictures, Videos, Breaking News Tech Tools by Subject and Skills Every year, so many new technology tools for teachers are launched into the market that it can be nearly impossible to keep up with them all. In order to keep you up-to-date with the latest and greatest educational tech tools, our team of edtech specialists has put together this list of the best edtech resources and technology tools for teachers. Clicking on the links below will take you to hundreds of apps, websites, extensions, and more. Also, if you have a tool that you'd like to see added to the list, please feel free to contact us at admin@edtechteacher.org. The following technology tools for teachers have been organized by academic subjects, topics, and learning activity.

Content is a print concept – Dave's Educational Blog I’ve been saying annoying things like “I don’t believe in content” and “what do you mean course ‘content?’ I don’t even know who’s going to be there” for a number of years now. There’s a part of me, as George Station will attest, that just likes the sound of certain words put together. The bigger part of me has always struggled with the word. There are fundamental claims made, I think, when we use the word content. I have this idea (totally unverifiable) that our current educational use of ‘content’ came to us from print – that it is a concept that only makes sense when arguments are, as Socrates would say, ‘no longer able to defend themselves.’ Why don’t I say writing, you might ask, instead of print? When Europe starting peeking its way through the veil of the dark ages, one of the first things we hear about learning comes from the court of Charlemagne. You can totally see why he wanted to make sure people did EXACTLY as they were supposed to. to So… here’s the think piece.

16 skills students need to learn today to thrive tomorrow The gap between the skills people learn and the skills people need is becoming more obvious, as traditional learning falls short of equipping students with the knowledge they need to thrive, according to the World Economic Forum report New Vision for Education: Fostering Social and Emotional Learning Through Technology. Today's job candidates must be able to collaborate, communicate and solve problems – skills developed mainly through social and emotional learning (SEL). Combined with traditional skills, this social and emotional proficiency will equip students to succeed in the evolving digital economy. What skills will be needed most? An analysis of 213 studies showed that students who received SEL instruction had achievement scores that averaged 11 percentile points higher than those who did not. Good leadership skills as well as curiosity are also important for students to learn for their future jobs.