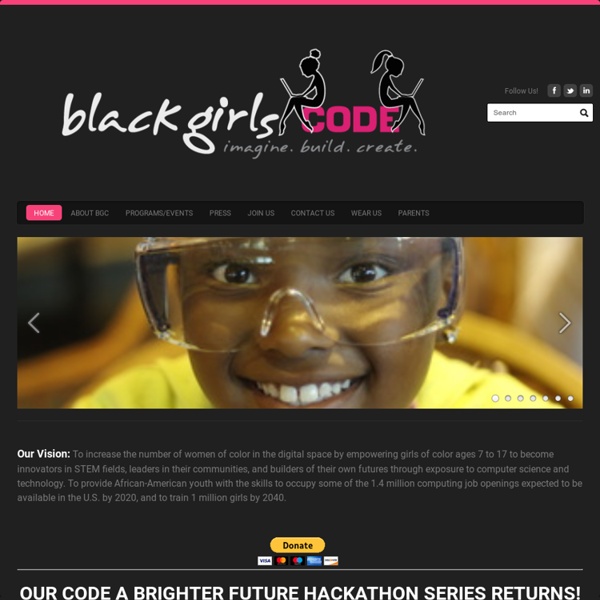 Your brain on weed - CNN Video Your brain on weed Source: CNN Added on 7:02 PM ET, Mon March 10, 2014 Your brain on weed Replay Researcher reveals how “Computer Geeks” replaced “Computer Girls” Asked to picture a computer programmer, most of us describe the archetypal computer geek, a brilliant but socially-awkward male. We imagine him as a largely noctural creature, passing sleepless nights writing computer code. According to workplace researchers, this stereotype of the lone male computer whiz is self-perpetuating, and it keeps the computer field overwhelming male. Intro to Computer Science Class Online (CS101) When does the course begin? This class is self paced. You can begin whenever you like and then follow your own pace. It’s a good idea to set goals for yourself to make sure you stick with the course.

#IWishMyTeacherKnew shares students' heartbreak, hopes Many of the students she teaches at Doull Elementary just wish they had something in common with her, that she knew soccer or video games. But sometimes, their wishes bring tears to her eyes, and offer a glimpse of painful struggles in their young lives. There's a student who misses her father: "I haven't seen him in six years." Another who wants to tell her she's lonely: "I don't have friend to play with me." Women, Let’s Claim Wikipedia! Earlier this year, while I was sequestered in the bat-cave studying for my qualifying exam, I came across something very distressing. As has been widely reported, only 13 percent of the people editing Wikipedia articles are women. Though there are endless articles debating the causes, my interest lies elsewhere: What can be done to change this? I believe that more women would be involved in editing Wikipedia if it were a social activity, rather than an insular one, so I hosted a WikiWomen party at my house to make the experience collaborative. In attendance were five female chemists: myself, Anna Goldstein, Rebecca Murphy, Chelsea Gordon and Helen Yu.

How to Code During the month of December, Computer Science Education Week is promoted and is a national movement for students in K-12 schools. Computer Science is an important subject or concept to teach students because it will teach them: about meaningful contextthe learning process break down complex ideas into simpler ideascollaborate with otherskeep calm and move on when frustration sets insparks their creativity and critical thinking skills These are just a few benefits of learning to code. ColorCode Personality Science Full Analysis If you want a completely customized report that is designed to fully analyze your personality, and provide bonus tools to help you on your way to personal development, this is the version for you. (Scroll down to start test) Results Include A pie chart showing you what you scored in all 4 colors

Google Traduction * Type to translate 90 languages* Use your camera to translate text instantly in 26 languages* Two-way automatic speech translation in 40 languages* Draw with your finger as a keyboard alternative* Download language packs for when you're traveling, or if your connection is expensive or slow.* Star and save translations for future reference* Take pictures of text for higher-quality translations or for languages not supported by instant camera translation Some features not available in all languages. Coding Is the New Writing for Developing Self-Expression, Communication, Imagination and Solving Hard Problems  Putting coding on a par with the basic 'three Rs' is a trend in education-talk recently (Reading, Writing, Arithmetic, and Lately Coding, NYT, May 10, 2014). However, we know from years of research that its utility goes well beyond the "schoolish three Rs" or "a great job or even instant riches" some day in the future. In my view kids must become coders and digital media creators rather than just information receivers and videogame players, because computational inventiveness, visualization and modeling, toward which coding is one fundamental first step, is essential for success in a world in which digital communication increasingly dominates civil society, business and commerce, science, entertainment, and human interaction around some of our world's most pressing problems --climate change, water scarcity, terrorism and security, global education and health.

Personality test based on C. Jung and I. Briggs Myers type theory This free personality test is based on Carl Jung’s and Isabel Briggs Myers’ personality type theory.business users - use advanced version » Upon completion of the questionnaire, you will: Obtain your 4-letter type formula according to Carl Jung’s and Isabel Briggs Myers’ typology, along with the strengths of preferences and the description of your personality type Discover careers and occupations most suitable for your personality type along with examples of educational institutions where you can get a relevant degree or training Understand communication and learning styles of your type. See which famous personalities share your type Be able to use the results of this test as an input into the Jung Marriage Test™ and the Demo of the Marriage Test™, to assess your compatibility with your long-term romantic partner Instructions: When responding to the statements, please choose the response you agree with most.

Boobs! (Not a Big Deal) I would like for you to take a good look at that picture for a moment. You see a baby, the top part of a breast, and some bacon. Are you offended? If you are, I'd like for you to also look at these: Those are all photos that I've been greeted with when I opened my Facebook page. 7 Apps for Teaching Children Coding Skills It's hard to imagine a single career that doesn't have a need for someone who can code. Everything that "just works" has some type of code that makes it run. Coding (a.k.a. programming) is all around us. That's why all the cool kids are coding . . . or should be. Programming is not just the province of pale twenty-somethings in skinny jeans, hunched over three monitors, swigging Red Bull.

Did you know? Now playing In the US, 80% of girls have been on a diet by the time they're 10 years old. In this honest, raw talk, neuroscientist Sandra Aamodt uses her personal story to frame an important lesson about how our brains manage our bodies, as she explores the science behind why dieting not only doesn't work, but is likely to do more harm than good.