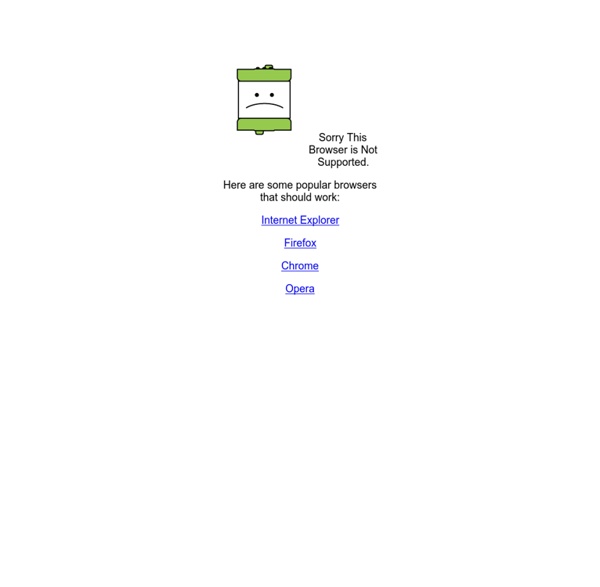 A DIY Video Game for the Neighbourhood A DIY Video Game for the Neighbourhood Zoe Romano — December 9th, 2013 Last June, Kris Temmerman was featured on this blog with a painting machine made with Arduino Due. Now he’s just sent us this cool project he made for his office window: My house/office has a store window and I try to make use of it as much as possible. I had some projections etc. in there before, but now I wanted to make something interactive. The Creative Science Centre - by Dr Jonathan P. Hare Apart from the piezo generator all the following are based on the same simple design: magnets are rotated (or translated) near to coils of wire (Faraday Induction). There is no coil switching so these are AC generators. On magnet movement, voltages are induced (generated) into the coils of wire. (Note: the magnets need to be the very strong - Rare Earth Neodymium type).

MakerBox présenté par Usbek & Rica The project Does the Fab Lab trend attract you as much as it confuses you ? Or - if you’re already a maker - are you having trouble to explain your friends and relatives what your job consists in and how you belong to a movement which endeavours to change society? Here at Usbek & Rica, we’re convinced that the Maker Movement holds the promise of a better future. That is why we designed the MakerBox, a gift pack that’ll allow everyone to step into a fabrication workshop. We Need More Kids Apps Like 'Robot Factory' Raul Gutierrez, the founder of the Brooklyn-based kids app company Tinybop, worries about the effect brands are having on the way kids play. Here’s how he sees it: Today’s kids movies and TV shows are great, but as their stories seep into more and more toys, the possibilities for the imagination are constricted as a result. Whether or not you agree with that diagnosis, it spawned a tremendously cool kids app.

Introducing Trinket Trinket may be small, but do not be fooled by its size! It's a tiny microcontroller board, built around the Atmel ATtiny85, a little chip with a lot of power. We wanted to design a microcontroller board that was small enough to fit into any project, and low cost enough to use without hesitation. Perfect for when you don't want to give up your expensive dev-board and you aren't willing to take apart the project you worked so hard to design.

Science fair project: Ultra-simple Electric Generator, spinning magnets All metals contain a movable substance called "electric charge". Even uncharged wires are full of charge! After all, the atoms of the metal are made half of positive protons and half of negative electrons. Metals are special because their electrons don't stay connected to the metal atoms, instead they fly around inside the metal and form a type of electric "liquid" inside the wires. All wires are full of electric fluid. Modern scientists call this the "electron sea" or "electron gas."

App Uses Kids' Obsession With Phones to Teach Them Coding When Raul Gutierrez’s son was younger, he came up with a great name for his father’s smartphone. “He’d call it the everything machine,” says Gutierrez, founder of childrens’ app company Tinybop. “Because to him it could do everything.”