Banana-Walnut Bruléed Oatmeal - A Modest Feast. Last October, Andrew and I embarked on a semi-spontaneous roadtrip from San Francisco to Brooklyn. 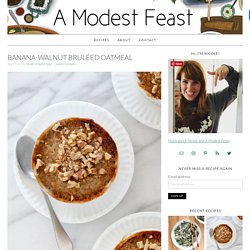 With little planned besides deciding on a timeframe (a little less than two weeks), and a couple spots we wanted to see (namely Monument Valley and Sedona), we set off in a southerly direction. Our first stop was an overnight in Palm Springs at the kooky-chic Parker Palm Springs, where we wandered the lushly-green grounds, played a game of tennis, and ate a lovely breakfast.

Along the way, we tried our first date shakes, caught up with dear friends and family, ate some epic pizza, were awed by our country’s stunning natural beauty, laughed off some car troubles, fell in love with Waffle House — for the record, I take my hashbrowns scattered, smothered, covered, and peppered — and listened to a whole lot of Willie Nelson, but it’s that first breakfast that I keep coming back to. Banana-Walnut Bruléed Oatmeal Recipe type: Breakfast Yield: 4 servings Ingredients Instructions Notes. WEEKEND CHILLS + THREE EVERYDAY OATMEALS - Wholehearted Eats. Last week the weather suddenly turned cold and I got to dig out my scarf and the extra blankets for our winter time bed. 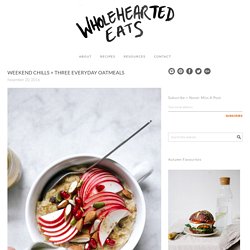 With the slew of extra warm woollens weighing us down in the morning, it’s become that much harder to muster ourselves out of bed. Naturally, the thought of a herbal latte and a warm breakfast are often my only motivation to tear back the heavy blankets and get on with my day. » Porridge au lait d’or et Salon du livre de Périgueux. Cinnamon Raisin Oatmeal with Maple Roasted Sweet Potato and Pear. Remember that vegan passover potluck I was telling you about? 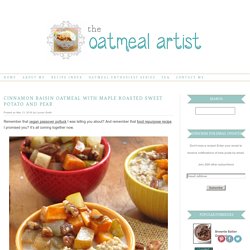 And remember that food repurpose recipe I promised you? Raw Buckwheat Porridge De Luxe. We did it again … survived another winter in Sweden! 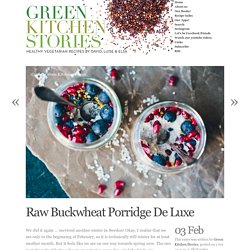 Okay, I realize that we are only in the beginning of February, so it is technically still winter for at least another month. But it feels like we are on our way towards spring now. The sun is visiting Stockholm a few more minutes every day. And the birds are returning! Porridge Betterave-Choco-Coco Zeste de citron et Cardamome. Banoffee Parfait au caramel de datte { 100% végétal } J'ai vu cette recette ici même il y a 2 jours. 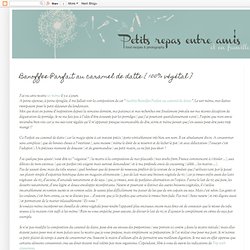 Moi qui étais en panne d'inspiration depuis la semaine dernière, ma patience et mes recherches ont finalement prévalu sur ma récente déception de dégustation de porridge. Porridge with beetroot, apple & cranberry compote & toasted hazelnuts. Encyclopedia of OATS « the edible perspective. Many of you have been asking about the difference between all the different oats I use, how to cook them, what brand to buy, etc. I hope the following will answer all or most of your questions.

I can do a follow-up if you have any further questions or comments. And we’re off……. The OAT dictionary: Whole Oats Whole oats are what come directly off the oat plant. Hull The hull is the hard shell that encases the Whole Oat. The Best Ever Pumpkin Oatmeal. Are you wondering how this could the best bowl of pumpkin oats ever? 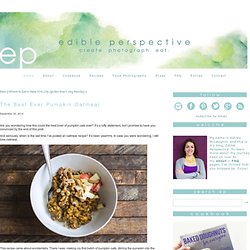 It’s a lofty statement, but I promise to have you convinced by the end of this post. Beet & Berry Yoats + Big Love. A few years ago we had a section on this blog called Big Love where we shared links and things that inspired us at the moment – high and low. 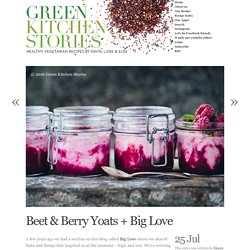 We’re reviving it today as we have too many unanswered emails and comments asking about everything from our favorite places, books, ceramics and camera gear. We also added a couple of other things to the list, like Elsa’s favorite song. Of course we’re also sharing the recipe for these Yoat jars further down in this post. Toasted Coconut Pancakes - Minimalist Baker. Revolutionary Pancakes. When I was pregnant, you wouldn’t believe how many people told me how much fun it would be cooking for a little person someday. 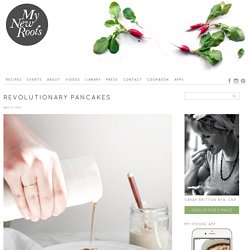 Although this seemed like an obvious thing, I kind of shrugged it off, thinking that it wouldn’t be that awesome. I think part of me feared the pressure, or the possibility of cooking becoming more of a chore than a pleasure. Although I’ve had my fair share of noggin scratchin’, I have to say that cooking is now more than a pleasure. It’s moved into a greater creative place, I feel freer, and I’ve discovered so many cool things through the challenges. Take this recipe for example.

This got me pretty excited. And what is so revolutionary about them? Flour Power? If you consider foods’ three mortal enemies: heat, light and oxygen, flour seems like it may be on the losing end of this battle. To remedy all of this, we can grind our own grain and use them right away. Oat and Almond Pancakes. I have been a little wary of pancakes lately. 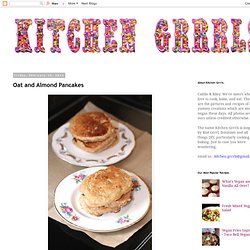 Oftentimes, our pancakes turn out to be rather dense which in turn is a bit heavy on your stomach, especially when eating them for breakfast. But pancakes are an important aspect of life so we had to find a satisfying recipe. The Perfect Vegan Pancake Recipe. Strawberry White Chocolate Pancakes. 4 Comments Updated on April 26, 2016 It has been entirely too long since I’ve made, or even had, pancakes and I have to say that these supremely fluffy Strawberry White Chocolate Pancakes were an incredible way to end that drought. 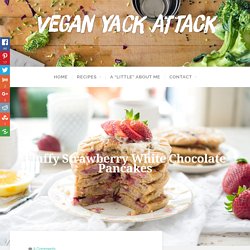 Light & fluffy cornbread pancakes that can be made sweet or savory – perfect for breakfast or dinner! The secret addition of vinegar in these pancakes makes them irresistibly light and fluffy – without needing any oil whatsoever! If you want to get all scientific: basically what happens when you add vinegar to the pancake batter is that it will react with the baking soda to create carbon dioxide.

In other words, the baking soda is alkaline and the vinegar is an acid, so when they combine in a mixture, it will bubble up. (Remember making volcanoes in elementary school???) Plant-Powered Protein Pancakes — dolly and oatmeal. Hey, hey! I just completed my 3-week cleanse/elimination diet this past sunday, and i couldn't be more thrilled about how i'm feeling, but also that it's now over! It was somewhat of rollercoaster being that our little one went through/is still going through some sort of sleep regression (??)

- again! (gosh, i hope it passes soon!) But overall i came out of these 21 days with a bit more clarity, which, whatever you're doing in life, i think is always a good thing. overall, it informed me that our bodies are capable. period. that given the capacity, our bodies are ready and able to adapt - to let you know what's working, and what's not. seriously though, the only hard thing about being on somewhat of a strict diet for the past few weeks was not making and eating everything in laura's new, amazing cookbook! Maple Pecan Corncakes. “They seem to be really into these corncake things,” I said while perusing the restaurant’s online menu on my iPhone. We were in Portland, Oregon, looking for a place to eat breakfast on a weekday.

“Well, the menu sounds pretty good. Let’s go there,” said my friend. So we piled into the car and they let me sit in the front seat, even though that’s where the navigator sits and I am shit at navigating. It has to do with my short attention span and liking to watch scenery. Coconut Baked Oatmeal. Look at that crispy edge. You’re gonna want that crispy edge. Trust me, I ate a circle around the pan to confirm it’s the best part (and it totally is). This baked oatmeal is the perfect dish for lazy weekends, hosting a house full of guests, or brunch, because it’s quick, easy, and feeds a crowd.

The recipe comes together in about 1 hour, requires just 10 simple ingredients, and is vegan, gluten-free, naturally-sweetened, and vegan butter-free! Blueberry Coconut Baked Buckwheat Porridge [Vegan + Gluten Free] This version of my baked buckwheat porridge turned out incredibly moist and decadent, one of the best flavor combinations for baked porridge that I've tried!! Coconut is loaded with healthy fats and fiber to help keep you full for longer. This recipe is also gluten free, vegan, and great for mornings when you have a little extra time to make a truly dessert-like breakfast (while still being healthy!)