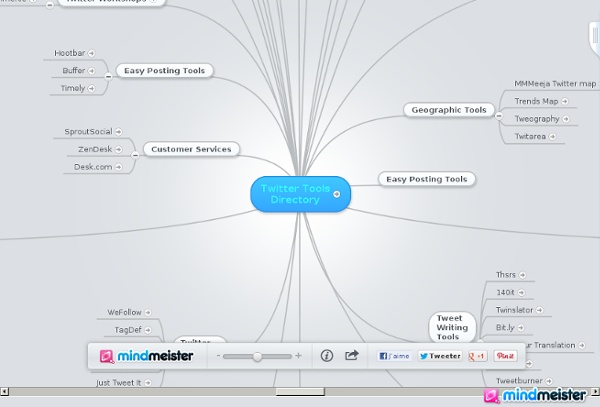 Custom Design Random qr code with transparent background QR code generator Custom QR code link to Twitter Comments here (tumblr post) : "QR code to Twitter" Color : | | Background : | Tweet Topic Explorer By: Jeff Clark Date: Tue, 19 Apr 2011 One problem I face on a daily basis is to decide for a given Twitter account whether I want to follow it or not. I consider many factors when making the decision such as language of their tweets, frequency, whether they interact on twitter with other people I admire, or if I have some personal or geographic connection with them. But the most critical factor for me is whether they tweet about things that match my interests. Nicole Pamani Hey guys! It’s Wednesday and you know what that means: time for another edition of Industry Hump! Last week we talked about the top mistakes bloggers tend to make and how to avoid/correct them. This week we’ll be talking about some insider SEO tips and tricks.

8 Free Tools to Visualize Information on Twitter There’s a lot of noise on Twitter. People use a variety of ways to filter through that noise, from following specific lists, finding like-minded people through third party sites, or using a variety of services and websites to find the information that matters to them on Twitter. Another interesting way to filter through what is being said on Twitter, and better yet, analyse it, is to visualize it. This is certainly not a new idea, and we’ve written about some services in the past that will allow you to do just that.

Exploring the Twitterverse Brian Solis inShare216 Happy New Year! Twitter officially launched to the public in July 2006. By 2008, the universe of applications developed to enhance the Twitter experience was boundless. The Most Complete Twitter Application List Available - 2011 Edition I believe this is the best, most complete and accurate list of valuable Twitter applications available on the internet right now. To be fair, I absolutely have merged and plagiarized other older and outdated lists that I found (the larger ones are credited below). However, I spent a good deal of time to clean out the dead applications, delete the apps that were overly quirky or being developed, focus more on the apps that increase productivity, and add in many of the new great apps that have come out over the past six months - particularly in the productivity / business apps section where my primary interest lies.

10 Powerful Tools To Make Tweeting More Efficient It is fantastic to see Twitter moving faster than ever with its developments. The company received $800m in investment, acquired several Apps recently and put out plenty of new features. On top of all this, the company just announced that there are now over 1 million Apps that are part of the Twitter eco-system. Every 1,5 seconds another one registered. 19 Twitter Desktop Apps Compared Twitter has become an integral part of our social media lives, marketing strategies, and business objectives. We have multiple accounts, hundreds of followers to watch, Twitter trends to track, hashtags to follow, and a frequent need for continuously updating search results. As such, getting by on the limited feature set available via Twitter.com is difficult at best.