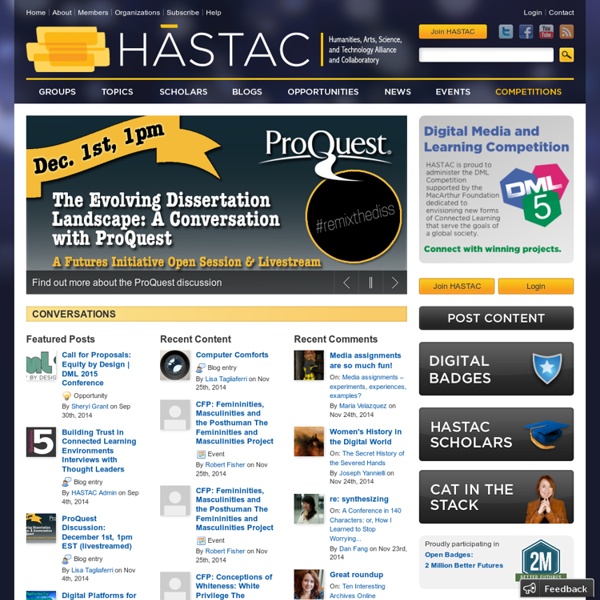 Field Notes for 21st Century Literacies:A Guide to New Theories, Methods, and Practices for Open Peer Teaching and Learning Concerned about the challenges facing higher education? Join us and be part of the solution. HASTAC: Changing the Way We Teach... What is the current state of research on recognition and accreditation systems for informal and interest-driven learning? In the Badges for...

The Conversation Prism v4.0 What’s different from 3.0 ? Well, version 4.0 brings about some of the most significant changes since the beginning. In this round, we moved away from the flower-like motif to simplify and focus the landscape. With all of the changes in social media, it would have been easier to expand the lens. Instead, we narrowed the view to focus on those that are on a path to mainstream understanding or acceptance. The result was the removal of 122 services while only adding 111.

Association for Computers and the Humanities The annual Digital Humanities conference is an opportunity for the ACH to pursue in-person many of the initiatives that we support more virtually during the year. We hope you’ll be able to join us for some or all of our events at DH2013 in Nebraska! ACH Annual General Meeting, Jobs Slam, and Pedagogy Lightning Talks Sure, there may be some sub-committee reports and even an important vote or two, but you haven’t really experienced an annual general meeting until you’ve been to an ACH Jobs Slam! Badges What is a Badge? badge [baj]: a special or distinctive mark, token, or device worn as a sign of allegiance, membership, authority, achievement, etc. (Source: Dictionary.com) A badge is a symbol or indicator of an accomplishment, skill, quality or interest. From the Boy and Girl Scouts, to PADI diving instruction, to the more recently popular geo-location game, Foursquare, badges have been successfully used to set goals, motivate behaviors, represent achievements and communicate success in many contexts.

Institute of Design The d.school’s K-12 Lab team is abuzz with learnings from the recent DT2Schools Workshop. The workshop brought together teachers and administrators from 8 different schools, including two teachers from the Lab’s international partner Riverside School who came all the way from India. In addition to schools, representatives from Teach for America’s curriculum design team also attended. BlooSee BlooSee is a web- and mobile-based social mapping platform for ocean recreation and conservation. The platform is designed to host a combination of crowdsourced and institutional media, forecasts, charts, and location based points of interest, safety, navigation, conservation, and cruising routes. BlooSee is owned by BlooSee, Inc. a Silicon Valley Startup company[1] originally founded in 2010 by internet entrepreneurs Pedro Valdeolmillos (originator of the idea) and Marc Puig. The Explore Section[edit] Nautical charts A nautical chart layer allows to overlay NOAA (United States), New Zealand/Pacific Ocean and Brazil nautical charts, while a slider offers control of their transparency over the map.

Institutes for Advanced Topics in the Digital Humanities These NEH grants support national or regional (multistate) training programs for scholars and advanced graduate students to broaden and extend their knowledge of digital humanities. Through these programs, NEH seeks to increase the number of humanities scholars using digital technology in their research and to broadly disseminate knowledge about advanced technology tools and methodologies relevant to the humanities. The projects may be a single opportunity or offered multiple times to different audiences. Institutes may be as short as a few days and held at multiple locations or as long as six weeks at a single site. For example, training opportunities could be offered before or after regularly occurring scholarly meetings, during the summer months, or during appropriate times of the academic year.

'Badges' Earned Online Pose Challenge to Traditional College Diplomas - College 2.0 By Jeffrey R. Young The spread of a seemingly playful alternative to traditional diplomas, inspired by Boy Scout achievement patches and video-game power-ups, suggests that the standard certification system no longer works in today's fast-changing job market. Educational upstarts across the Web are adopting systems of "badges" to certify skills and abilities. If scouting focuses on outdoorsy skills like tying knots, these badges denote areas employers might look for, like mentorship or digital video editing. Many of the new digital badges are easy to attain—intentionally so—to keep students motivated, while others signal mastery of fine-grained skills that are not formally recognized in a traditional classroom.

Sparks Fly - March/April 2011 Can imagination be taught? Evidently, because the d.school’s innovation hothouse is changing the way people think. A first-year graduate student in the management science and engineering program, Asha Gupta had barely started Design Garage, a course aptly characterized as an "imagination dunk tank"—and she was getting soaked. Gupta and her classmates were challenged to develop a prototype that would improve the gift-giving experience.

The Alliance for Networking Visual Culture » Updates Announcing Our Summer Schedule of Scalar Webinars April 17, 2014 The Scalar development team will be offering a series of free online webinars this summer. Our “Introduction to Scalar” webinars will cover basic features of the platform: a review of existing Scalar books and a hands-on introduction to paths, tags, annotations and importing media. Our “Intermediate Scalar” webinars will delve into more advanced topics including the effective use of visualizations, annotating with media and a primer on customizing appearances in Scalar. Our summer schedule will include four dates: