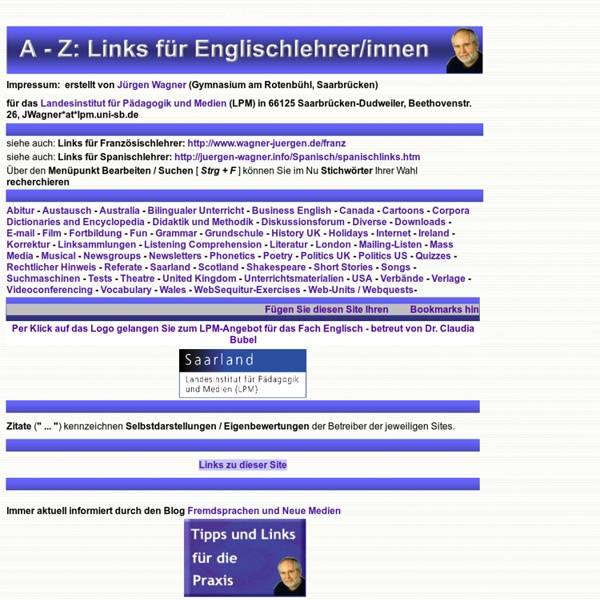 The Best Fun Videos For English Language Learners In 2016 – Part Two I use short, funny video clips a lot when I’m teaching ELLs, and you can read in detail about how I use them in The Best Popular Movies/TV Shows For ESL/EFL (& How To Use Them). In short, there are many ways to use them that promote speaking, listening, writing and reading (including having students describe – in writing and verbally – a chronological description of what they saw). I’ve posted a few of them during the second half of this year, and I thought it would be useful to readers — and to me — if I brought them together in one post.

About Us What is Open Culture’s Mission? Open Culture brings together high-quality cultural & educational media for the worldwide lifelong learning community. Web 2.0 has given us great amounts of intelligent audio and video. It’s all free. It’s all enriching. But it’s also scattered across the web, and not easy to find. Top 12 Effective End of the Year Activities Ah, the end of the year. Everyone’s tired and losing focus. Some tests are behind you (state tests, AP exams), some may be ahead of you, and probably no one – you or your students – is really at their best. So what’s a teacher to do? Choose a goal to make the last month of school an effective one. Here are some time-honored end of the year activities. British Empire - Referat, Hausaufgabe, Hausarbeit The British Empire -------------------------------------------------------------------------------- The B.E. was the largest colonial empire in history. In Britain were two empires, one of them was called “First Empire” (1607-1776) and the other was called the “Victorian Empire”. It’s ending was in 1931,when it turned into the “British Commonwealth of Nations”. The making of the Empire: In the 16th century a fight between Spain, Portugal, Netherlands, France and England began.

25 ideas for using WhatsApp with English language students Philip Haines is the Senior Consultant for Oxford University Press, Mexico. As well as being a teacher and teacher trainer, he is also the co-author of several series, many of which are published by OUP. Today he joins us to provide 25 engaging and useful classroom activities for language learners using WhatsApp. There are three main obstacles to the use of technology in ELT.

What the Heck Is Project-Based Learning? You know the hardest thing about teaching with project-based learning? Explaining it to someone. It seems to me that whenever I asked someone the definition of PBL, the description was always so complicated that my eyes would begin to glaze over immediately. ‘I’ve given up marking – and so should you’ Teachers are marking too much. Or, at the very least, we’re doing far too much of the wrong sort of marking; the sort of marking that keeps pencil cases open, and mouths and hearts shut. We’re spending too much time ticking, flicking and dicking about in the children’s books and it simply isn’t fair. On us or on them. According to the Department for Education’s Workload Challenge report of 2015, the majority of teachers believe that marking is something that takes “too much time”. Some spend 20 hours per week marking books.

ESL English Listening & Adult Literacy - News - Audiobooks - Songs - Radio Dramas The Tunnel Under The World by Frederik Pohl Guy Burckhardt wakes up screaming, but can't remember the nightmare that caused his fright. Slowly over the next couple of days he comes to realize he's been reliving the same day over and over. And things only get stranger and more frightening from there. One of the true classics of science fiction. This famous Pohl story explores cybernetic robots and implanted personalities.