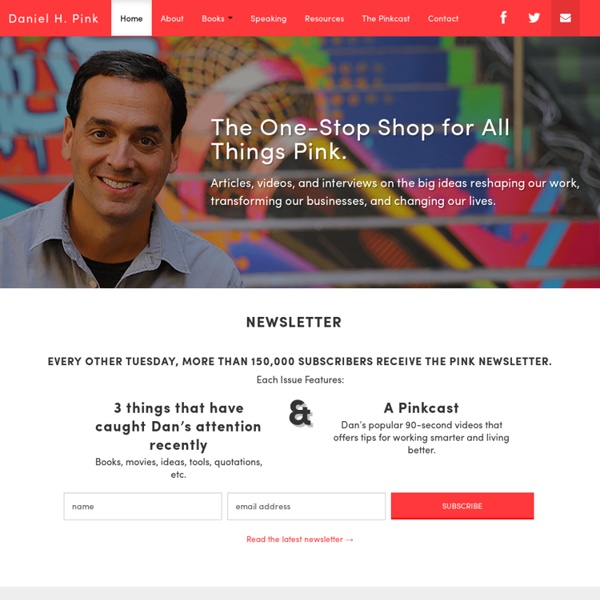 Chickenpox (Varicella) Vaccine: Schedule and Side Effects Why do I need to register or sign in for WebMD to save? We will provide you with a dropdown of all your saved articles when you are registered and signed in. How Many Shots of the Chickenpox Vaccine Are Needed? The varicella vaccine is given in two doses. Datavisualization.ch Selected Tools Sally Hogshead Are you a visual person? If so, you like to learn ideas in a graphic way. When I spoke to 500 trainers recently, a graphic facilitator captured my Fascinate keynote in real time, drawing while I was giving the presentation.

The Blog of Author Tim Ferriss “Everyone’s looking for rules to follow, and the sooner you realize there aren’t any, the better art can be.”– Jerrod Carmichael Jerrod Carmichael is pushing the boundaries of comedy with his groundbreaking work in stand-up, television, and film. Now just 29 years old, what this driven North Carolina native has accomplished is mind-boggling, and 2017 is going to be his biggest year yet. 100 Websites You Should Know and Use (updated!) Entertainment Meet David Peterson, who developed Dothraki for Game of Thrones There are seven different words in Dothraki for striking another person with a sword. Among them: “hliziﬁkh,” a wild but powerful strike; “hrakkarikh,”a quick and accurate strike; and “gezrikh,” a fake-out or decoy strike. But you won’t find these words in George R. R.

Chicken Pox Vaccine Update - Chicken Pox Booster Dose Many experts and parents are very happy with Varivax, the chickenpox vaccine. Before the chickenpox vaccine began to be routinely given in 1995, chickenpox was a very common childhood illness, that even when it wasn't serious, still left children miserable for at least a week. And unfortunately, sometimes these chickenpox infections did become serious, leading to hospitalization and even death. In the United States, before routine use of the chickenpox vaccine, 'there were an average of 4 million cases of varicella that resulted in 10,500-15,000 hospitalizations and 100-150 deaths every year,'1 many of which occurred in children. Now that Varivax is routinely used, there has been 'a substantial decrease in incidence'2 of chickenpox and its complications.

Lifework Heirloom Apparent Fifty years after it was purchased, an Eames Lounge Chair and Ottoman begins its third chapter with a new generation of the... Read More Live from New York A major market for our furniture, and the headquarters of some of our most important designers, Manhattan has long been... Read More Getting to Comfortable In creating a more casual design for today’s work environments, Jehs + Laub sought a technical solution to balance structure... Read More Myth Maker Celebrated as a photographer of iconic mid-century architecture, Balthazar Korab accumulated lesser-known portfolios that... Read More Social Furniture For Austria’s entry in the Venice Architecture Biennale, Vienna-based EOOS offers a problem-solving design to help Europe’s...

Ways and Means Toolkits As the largest non-profit urban housing developer in the US, The Community Builders (TCB) has developed and sustained communities for low-income families for more than 40 years. Facing a series of new challenges, opportunities, and technologies, TCB began to re-examine its approach for helping residents and communities realize their full potential. Looking to evolve from the role of landlord to innovator, TCB came to IDEO for help creating a series of tenant services and opportunities. IDEO began conducting fieldwork, visiting mixed- income housing sites to examine how tenants interact with TCB communities. Second Chicken Pox Shot Boosts Coverage By Nathan Seppa, Science News Two are better than one when it comes to chicken pox vaccinations, scientists report January 5 in The Journal of Infectious Diseases. The chicken pox shot, first made available in the United States in 1995, has already proved able to prevent the disease in about 80 to 85 percent of children who get a single dose. In 2006, the Centers for Disease Control and Prevention and the American Academy of Pediatrics jointly recommended a two-shot approach, suggesting that children get the doses four to six years apart. The new study supports this revision: Adding another shot ups disease prevention to nearly 100 percent. Pediatrician Eugene Shapiro of Yale University School of Medicine and his colleagues identified 71 children who had contracted chicken pox between 2006 and 2010, verifying the diagnoses with tests showing viral DNA in skin lesions on the kids.

Ben Casnocha Over the past year, Felix Salmon of Reuters wrote a masterful five-part series on the economics of content online. Worth reading for anyone interested in the topic. I link to each part below and excerpt my favorite paragraphs (all Salmon’s words, but emphases are my own). Part 1: Advertising Do advertising dollars ultimately end up where people spend their time, he asked, echoing Kleiner Perkins’ Mary Meeker says, or, pace Bernstein Research’s Todd Juenger, is that a “fallacy”? I’m with Juenger on this one.

Productive Flourishing Editor’s Note: This is a continuation of our core conversation series, “Extraordinary Women Change the World.” Yesterday, Emilie Wapnick shares what it feels like to be the only girl in the room. Today, Carmen Sognonvi shares the dangers of the prestige to your meaningful work. When Charlie and Angela invited me to be a part of this core conversation on women’s empowerment, I had just discovered Y Combinator founder Paul Graham’s 2006 article “How to Do What You Love.” I was especially struck by what he wrote about the dangers of prestige: Prestige is the opinion of the rest of the world… Prestige is like a powerful magnet that warps even your beliefs about what you enjoy.

Most his books are on motivation (business-related). His latest book is a non academic (easy to read) bibliography of motivation research for the past 60 years by mightylibrarian Mar 14