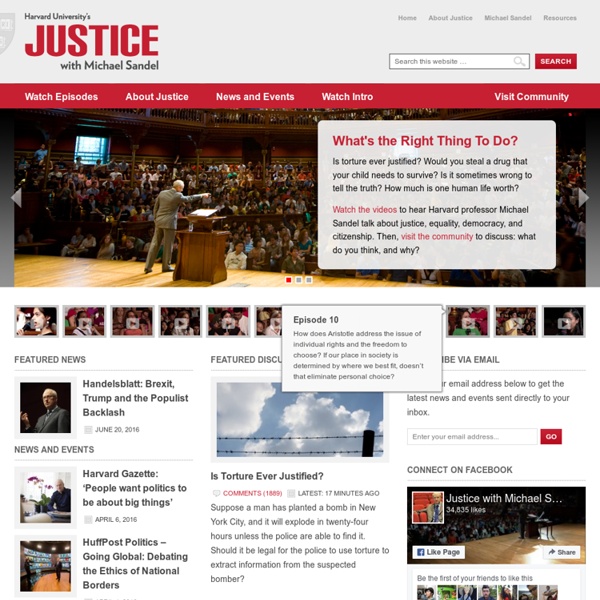 Video - Stefan W. Hell (2015) : Optical Microscopy: the Resolution Revolution Throughout the 20th century it was widely accepted that a light microscope relying on conventional optical lenses cannot discern details that are much finer than about half the wavelength of light (200-400 nm), due to diffraction. However, in the 1990s, the viability to overcome the diffraction barrier was realized and microscopy concepts defined, that can resolve fluorescent features down to molecular dimensions. In this lecture, I will discuss the simple yet powerful principles that allow neutralizing the limiting role of diffraction1,2. In a nutshell, feature molecules residing closer than the diffraction barrier are transferred to different (quantum) states, usually a bright fluorescent state and a dark state, so that they become discernible for a brief period of detection. Thus, the resolution-limiting role of diffraction is overcome, and the interior of transparent samples, such as living cells and tissues, can be imaged at the nanoscale.

Quite Interesting The first 52 episodes have been taken down so that they can be scrubbed, remastered, packaged together and released as No Such Thing As A Fish - The Complete First Year of Facts. The release will include not only the first 52 episodes, but also a string of bonus content as well as this beautiful, exciting, oh-so-rock-n-roll exclusive vinyl episode. You can pre-order now, and your record will come with a code that allows you to download the full first year of No Such Thing As A Fish. Until then, we hope you continue to feast your ears on episodes 53 onwards and our International Factball series, not to mention a new podcast every Friday - all of which are available for free on Soundcloud, iTunes or wherever you usually get them.

What Money Can't Buy - Michael Sandel Synopsis Should we pay children to read books or to get good grades? Is it ethical to pay people to test risky new drugs or to donate their organs? What about hiring mercenaries to fight our wars, outsourcing inmates to for-profit prisons, auctioning admission to elite universities, or selling citizenship to immigrants willing to pay? Isn't there something wrong with a world in which everything is for sale? Greenland's race for minerals threatens culture on the edge of existence The old Inuktun word for February is hiqinnaaq – the time when the sun reappears. In this part of Greenland, the sun rises above the horizon again on 17 February, finally bringing to an end the kapirdaq (the dark period) which lasts for three and a half months. There has been much discussion in Greenland and elsewhere about the first sunrise this year in Ilulissat, down the coast. For the first time in living memory, the sun rose above the horizon two days early – a phenomenon that has baffled Greenlanders and scientists.

Why Isis fights For more than a century, Dabiq was one of northern Syria’s forsaken villages, a speck on a vast agricultural plain between the Turkish border and the deserts of Iraq, which hardly seemed likely to shape the fate of nations. A weathered sign at its entrance said 4,000 people lived there, most of whom appeared to have left by 2013, driven out over time by a lack of work – and lately by insurrection. For the first three years of Syria’s civil war, the arrival of a strange car would lure bored children to the town’s otherwise empty streets, scattering cats and chickens as they scampered after it. Little else moved. Dabiq’s few remaining men worked on the odd building project: a half-finished mosque, a humble house for one local who had just returned after 10 years labouring in Lebanon, or a fence for the shrine that was the town’s only showpiece – the tomb of Sulayman ibn Abd al-Malik.

What Money Can’t Buy Michael Sandel on a society where everything could be up for sale. Photo courtesy of the Wikimedia Commons Author Michael Sandel’s new book What Money Can’t Buy is troubling in the best sense of the word—it “troubles” the complacency with which Americans have received the rapid encroachment of the market into private life. In the post-Freakonomics world, economics has expanded exponentially, not only into the global market but into areas of life not previously governed by market forces. In his book, Sandel explains in both intellectual and historical terms how expansionist ideas of the role of economics coincided with the Reaganite elevation of lassiez-faire principles into something like a religion. Ending child marriage in India A child bride cowers at her husband's feet. Child marriages are illegal in India, but still take place. Photograph: Jodi Cobb/NG/Getty Images Sugandha is conducting a session on raising awareness about the perils of child marriage among a group of schoolgirls. They listen with rapt attention to the didi (elder sister) they all admire. Sugandha came back to school after being married and then thrown out of her in-laws' home when her first-born died.

See What I Mean? Visualizing in Science > Science for the Public December 11, 2012 Belmont Media Center Bang Wong Creative Director, Broad Institute of MIT and Harvard We depend on visual representation for science concepts and data to make this kind of information more comprehensible. Science illustration is art in the service of science. A Book Apart, Content Strategy for Mobile foreword by Paul Ford You don’t get to decide which platform or device your customers use to access your content: they do. Mobile isn’t just smartphones, and it doesn’t necessarily mean you are on the move. It’s a proliferation of devices, platforms, and screensizes — from the tiniest “dumb” phones to the desktop web. How can you be sure that your content will work everywhere, all the time? Karen McGrane will teach you everything you need to get your content onto mobile devices (and more).

Wealth ‘creators’ are robbing our most productive people There is an inverse relationship between utility and reward. The most lucrative, prestigious jobs tend to cause the greatest harm. The most useful workers tend to be paid least and treated worst.