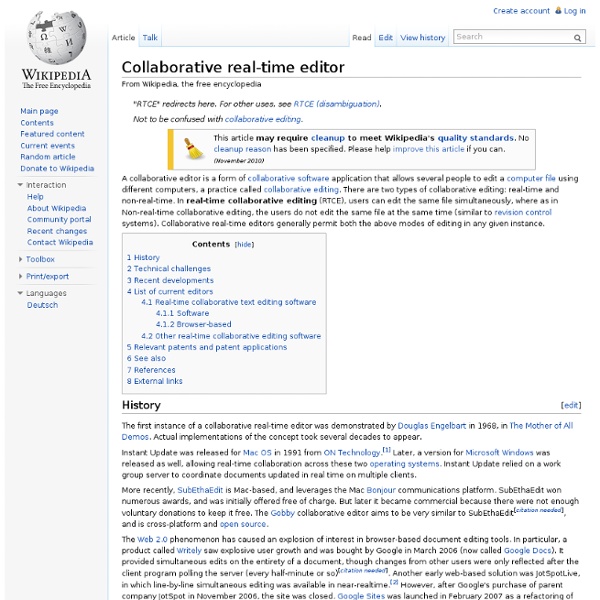 Google Drive Google Drive is a file storage and synchronization service provided by Google, released on April 24, 2012,[4][5] which enables user cloud storage, file sharing and collaborative editing. Rumors about Google Drive began circulating as early as March 2006.[6] Files shared publicly on Google Drive can be searched with web search engines. Google Drive is the home of Google Docs, an office suite of productivity applications, that offer collaborative editing on documents, spreadsheets, presentations, and more. Storage[edit] Google offers all users an initial 15 GB of online storage space, that is shared across three of its most-used services: Google Drive, Gmail, and Google+ Photos[7] (aka Picasa Web Albums).[8] Users can upgrade their free 15 GB account through a paid monthly subscription plan to get additional storage.[8] Documents using Google Docs native formats (including .gdoc, .gslides, and .gsheet) do not count towards this quota. Client[edit] Features[edit] Third-party apps[edit]

Google Docs An example of a document in Google Docs Google Docs is a free, web-based office suite offered by Google within its Google Drive service. It was formerly a storage service as well, but has since been replaced by Google Drive.[3] It allows users to create and edit documents online while collaborating with other users live. Google Docs combines the features of Writely and Spreadsheets with a presentation program incorporating technology designed by Tonic Systems. Data storage of files was introduced on January 12, 2010 with 1 GB of free space. History[edit] Writely's beta logo Google Docs originated from two separate products, Writely and Google Spreadsheets. Spreadsheets, launched as Google Labs Spreadsheets on June 6, 2006,[7] originated from the acquisition of the XL2Web product by 2Web Technologies. Writely originally ran on Microsoft ASP.NET technology which uses Microsoft Windows. In February 2007, Google Docs was made available to Google Apps users. Features[edit] File limits[edit]

Getting Things Done The GTD method rests on the idea of moving planned tasks and projects out of the mind by recording them externally and then breaking them into actionable work items. This allows attention to be focused on taking action on tasks, instead of recalling them.[2] First published in 2001, a revised edition of the book was released in 2015 to reflect the changes in information technology during the preceding decade. Themes[edit] Allen first demonstrates stress reduction from the method with the following exercise, centered on a task that has an unclear outcome or whose next action is not defined. Allen calls these sources of stress "open loops", "incompletes", or "stuff".[1]:13 He claims stress can be reduced and productivity increased by putting reminders about everything you are not working on into a trusted system external to your mind. Workflow[edit] Logic tree diagram illustrating the second and third steps (process/clarify and organize) of the five-step Getting Things Done workflow.

Prezi Prezi is a cloud-based (SaaS) presentation software and storytelling tool for presenting ideas on a virtual canvas.[1][2][3][4][5] The product employs a zooming user interface (ZUI), which allows users to zoom in and out of their presentation media, and allows users to display and navigate through information within a 2.5D or parallax 3D space on the Z-axis. Prezi was officially established in 2009 by co-founders Adam Somlai-Fischer, Peter Halacsy and Peter Arvai. History[edit] Prezi (or Prezi.com) was created by the support of Kitchen Budapest and Magyar Telekom in 2008 in order to replace the ordinary slide based presentations. Products and features[edit] Prezi Path Tool Prezi ZUI[edit] The Prezi online and offline ZUI editors employ a common tool palette, allowing users to pan and zoom, and to size, rotate, or edit an object. Prezi Desktop[edit] Working with images not supported in the online editor may be possible in the Prezi Desktop Editor. Prezi Collaborate[edit] Revenue model[edit]

Skype Skype /ˈskaɪp/ is a freemium voice-over-IP service and instant messaging client, currently developed by the Microsoft Skype Division. The name was derived from "sky" and "peer".[15] Skype was first released in August 2003. It was created by Janus Friis (Denmark) and Niklas Zennström (Sweden) in cooperation with Ahti Heinla, Priit Kasesalu, and Jaan Tallinn (Estonia), who supplied the backend which was also used in Kazaa.[16] Skype had 663 million registered users as of the end of 2010.[17] It was bought by Microsoft in 2011 for $8.5 billion. Microsoft's Skype division headquarters is in Luxembourg, but most of the development team and 44% of the overall employees of the division are still situated in Tallinn and Tartu, Estonia.[18][19][20] The service allows users to communicate with peers by voice using a microphone, video by using a webcam, and instant messaging over the Internet. Unlike most other VoIP services, Skype is a hybrid peer-to-peer and client–server system. History[edit]

Twitter History Creation and initial reaction Twitter's origins lie in a "daylong brainstorming session" held by board members of the podcasting company Odeo. Dorsey, then an undergraduate student at New York University, introduced the idea of an individual using an SMS service to communicate with a small group.[15][16] The original project code name for the service was twttr, an idea that Williams later ascribed to Noah Glass,[17] inspired by Flickr and the five-character length of American SMS short codes. The developers initially considered "10958" as a short code, but later changed it to "40404" for "ease of use and memorability ...we came across the word 'twitter', and it was just perfect. The first Twitter prototype, developed by Dorsey and contractor Florian Weber, was used as an internal service for Odeo employees[20] and the full version was introduced publicly on July 15, 2006.[8] With Twitter, it wasn't clear what it was. Reaction at the conference was highly positive. Growth Leadership

LinkedIn LinkedIn /ˌlɪŋkt.ˈɪn/ is a business-oriented social networking service. Founded in December 2002 and launched on May 5, 2003,[3] it is mainly used for professional networking. In 2006, LinkedIn increased to 20 million viewers.[7] As of June 2013[update], LinkedIn reports more than 259 million acquired users in more than 200 countries and territories.[2][8] History[edit] LinkedIn's CEO is Jeff Weiner,[2] previously a Yahoo! Founder Reid Hoffman, previously CEO of LinkedIn, is now Chairman of the Board.[2][15] LinkedIn is headquartered in Mountain View, California, with offices in Omaha, Chicago, New York, London, and Dublin. In late 2003, Sequoia Capital led the Series A investment in the company.[20] In June 2008, Sequoia Capital, Greylock Partners, and other venture capital firms purchased a 5% stake in the company for $53 million, giving the company a post-money valuation of approximately $1 billion.[21] 2011: IPO[edit] Acquisitions[edit] Membership[edit] Features[edit] Applications[edit]

Popplet Facebook This article is about the social networking service. For the type of directory, see face book. Facebook (formerly [thefacebook]) is an online social networking service headquartered in Menlo Park, California. Facebook was founded on February 4, 2004, by Mark Zuckerberg with his college roommates and fellow Harvard University students Eduardo Saverin, Andrew McCollum, Dustin Moskovitz and Chris Hughes.[7] The founders had initially limited the website's membership to Harvard students, but later expanded it to colleges in the Boston area, the Ivy League, and Stanford University. After registering to use the site, users can create a User profile, add other users as "friends", exchange messages, post status updates and photos, share videos and receive notifications when others update their profiles. History College-only service Zuckerberg wrote a program called Facemash on October 28, 2003 while attending Harvard as a sophomore. Service available to the general public Initial public offering

Pearltrees Pearltrees refers to itself as "a place for your interests".[8] Functionally the product is a visual and collaborative curation tool[9][10][11][12] that allows users to organize, explore and share any URL they find online as well as to upload personal photos, files and notes.[13] The product features a unique visual interface[14][15] that allows users to drag and organize collected URLs, and other digital objects.[16] that themselves can be further organized into collections and sub-collections,[17] (URLs). Users of the product can also engage in social/collaborative curation using a feature called Pearltrees Teams.[18] Pearltrees was founded by Patrice Lamothe, CEO,[22] Alain Cohen, CTO,[23] Nicolas Cynober, Technical Director,[24] Samuel Tissier, Ergonomy/UI[25] and Francois Rocaboy, CMO.[26] History[edit] Development of Pearltrees began in 2007. In July 2012 Pearltrees launched their iPhone app. Pearltrees introduced Pearltrees 2.0 on May 22nd, 2014. Usage[edit] Privacy[edit]

TED (conference) TED (Technology, Entertainment, Design) is a global set of conferences owned by the private non-profit Sapling Foundation, under the slogan "ideas worth spreading". TED was founded in 1984 as a one-off event.[1] The annual conference began in 1990, in Monterey, California.[4] TED's early emphasis was technology and design, consistent with its origins in the Silicon Valley. Since June 2006,[1] the talks have been offered for free viewing online, under Attribution-NonCommercial-NoDerivs Creative Commons license, through TED.com.[8] As of April 2014, over 1,700 talks are available free online.[9] By January 2009 they had been viewed 50 million times. In June 2011, the viewing figure stood at more than 500 million,[10] and on Tuesday, November 13, 2012, TED Talks had been watched one billion times worldwide.[11] TED's mission statement begins: We believe passionately in the power of ideas to change attitudes, lives and ultimately, the world. The TED Prize was introduced in 2005.

Why I Connect With Strangers on LinkedIn In online and real-world networking, the same principle applies: You never know when you might make a crucial connection. Social networks are like any other social environment: No two have exactly the same standards of acceptable behaviour. For good reasons, most of us would think twice before granting a Facebook friend request from a stranger. And since the workplace tends to have more rigid social standards than other areas of life, people commonly assume that their cache of connections on LinkedIn – the leading internet venue for professional networking – should be similarly exclusive, if not more so. But among my LinkedIn connections are many people I’ve never met offline. Weak Ties Win the Day In 1973, sociologist Mark Granovetter published a classic paper called “The Strength of Weak Ties,” which found that social capital, i.e. Finding Your “Godfather” There is no hard-and-fast way to know which of your weak ties will be the conduit for your next golden opportunity.