How to make Planets & Nebulas in Photoshop 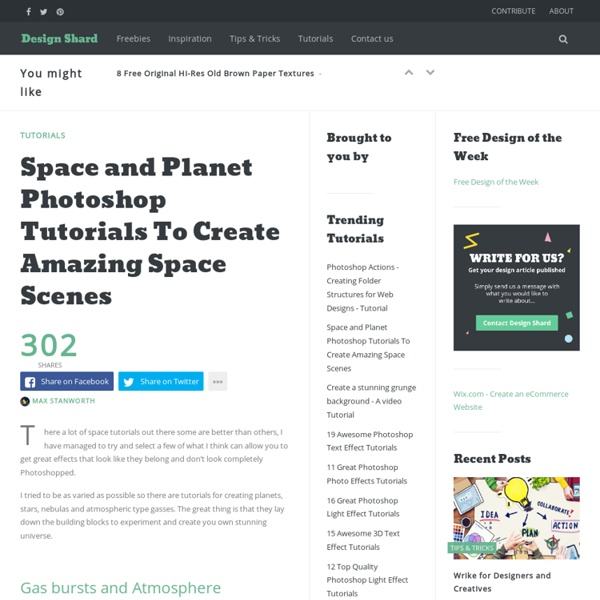 There a lot of space tutorials out there some are better than others, I have managed to try and select a few of what I think can allow you to get great effects that look like they belong and don’t look completely Photoshopped. I tried to be as varied as possible so there are tutorials for creating planets, stars, nebulas and atmospheric type gasses. The great thing is that they lay down the building blocks to experiment and create you own stunning universe. Gas bursts and Atmosphere This tutorial shows you how to create some great gas explosions coming from the planets atmosphere with some pretty simple tools, yet looks stunning Realistic Star fields Create realistic star fields, the trick with this one is to be totally random and keep building up your layers the end result will speak for it self, with an image that looks like its evolving. Simple Star fields Create simple yet affective star fields in 8 easy steps. Realistic Galaxy Realistic Space Nebula Space Nebula Make a Planet Planet Tutorial Related:  CREATIVE

Double Exposure Style in Photoshop We've featured quite a few posts and images with the effect most call double exposure. This technique consists of 2 images superimposed. There are some really nice examples with very intricate overlaying, usually with faces of people mixed with photos of nature. I've been thinking about giving it a whirl in Photoshop for a long time and I've finally gotten around to it. So in this tutorial/case study I will show you how to create this double exposure effect using Photoshop and some stock photos. Step 1 Open Photoshop and start a new document. Step 2 Isolate the girl from the background using the select tool. Step 3 Now let's add the second image for the double exposure experiment. Step 4 Duplicate the photo of the branches to make them mor compact. Step 5 Now put both images together. Step 6 Mask the photo of the girl with the branches selection. Step 7 Time for some refinements, especially on the edges and to make them look random and not so uniform. Step 8 Conclusion Applications

31 Breathtaking Planet & Space Tutorials For Photoshop Creating stunning space scenes is a great way to practice many photoshop techniques. It’s amazing that many of these tutorials use limited source files and most effects are created with photoshop itself. Rock textures are used to help create surfaces. Planet with Solar Glow Beginning with a simple rock for texture this design created a new world with clarity and great detail. Planet Rings Create your own Saturn. Planet With Glow Similar to the top example but re-enforces the techniques. Planet With Habitation Starting with a satellite image from Nasa. Fire Planet 5 minutes to make this make this planet explode into fire! Space Explosion Tutorial We think Psdtuts rocks! Deep Space Nebula A colorful Space Nebula using noise with Gaussian distribution and difference clouds. Photo Realistic Earth Type Planet This excellent jpg tutorial shows how to make a replica Earth from scratch. Nebula Tutorial With realistic gas clouds. Land Planet Training Detailed Star Field Gas Planets Asteroid Photshop Tutorial

60 Photography Links You Can’t Live Without « CameraPorn 13 Free Photoshop Actions That Will Save You A Lot of Time Have you ever heard of Photoshop actions? If you haven’t, wow, you’re missing out on a lot! Photoshop actions are the universe’s gift to photographers and avid Photoshop users. They’re simply a series of recorded Photoshop steps that will achieve a look without the user having to manually apply each process. For example, if you want your photo to have a certain vintage look, you just can click a single Photoshop action button and, bam, it does all the work for you! Photoshop actions are a powerful time saver. Of course, you’ll have to create a list of Photoshop actions in the actions palette first. Polaroid Many of us are still grieving over the death of the Polaroid camera a few years ago, so that’s why we became all giddy when we came across this action. Reddish 1970s style If you want your photo to look like it stepped out of the 1970s, this action is the perfect thing to use! Black and white Faded-out vintage effect A lot of Photoshopped vintage photos look flat and dull. Sun kissed Retro

Avengers - jayse This is just an image dump of marvel approved stills and screenshots of my work on the film. I'll do a proper post soon - this is a fraction of the work - But I had the distinct pleasure of working with Cantina Creative, leading the design of the glass screens for the Helicarier in the Avengers. I also led the design and animation of the all new and upgraded Mark VII Hud. Included are some partial explanations of how the HUD diagnostic functions Variations of it in 'all clear' mode, and a 'battle mode', after the suit has suffered damage and new windows have popped up to show depleted weapon stores and hazardous environmentals and general. The flight menu was designed with input from an A-10 Fighter Pilot. I start all designs on paper so I included some ideas for the dock icons. More soon. Add on note - I'm all about giving credit where credit is due (mainly because I've never gotten credit until this film - screen designers typically don't unfortunately.)

Sharpen Photo Like a Pro in Photoshop There are a hundred ways to improve your photos using Photoshop photo editing. In addittion to color correction, the other important aspect of photo editing that you should be looking at is how to sharpen images. Photoshop offers you extraordinary degree of control over the sharpness of your image. Interested? First Step: Convert your photograph from RGB or CMYK to Lab. Second Step: Open the channel palette. Third Step: Choose the channel There are three channels: L stands for lightness which is what you get when you convert to grayscale; A is Red to Green, B is Blue to Yellow. Fourth Step: Apply Filter In the Filter menu click Sharpen>Unsharp Mask and move the sliders to get a nice balance of sharpness before the halo becomes overwhelming.Click OK. TIP: When sharpening an image, you should watch out for the halo effect that will appear along a hard edge of a line or curve. Fifth Step: Convert the image back to RGB. Now you have an image that is sharp with no halo.

Context Free Art BATMAN v SUPERMAN: DAWN OF JUSTICE | Perception In the world of superheroes, no two legends loom quite so large as Batman and Superman, and no villain is quite as memorable as Lex Luthor. These legends finally hit the big screen together for the first time, in one of the biggest blockbuster events of 2016. Not only did some of the most popular characters in history fight it out, but they also set up the entire future of DC’s cinematic universe. So when Warner Brothers approached Perception in the summer of 2015 with the task of creating new UIs for Batman and Lex Luthor, our studio jumped at the opportunity. These two interfaces serve as an excellent foil for each other and each plays to its creator’s individual personality. While working on Batman’s user interface, Perception was tasked with creating the look of several screens for the Caped Crusader, the centerpiece of which is a giant display that fills the back wall of the Batcave. LexOS Initial Designs Final Design

10 Blogs to Help You Become a Photography Expert Photography often plays a major role in web design. So It’s no surprise that many web designers have an interest in it. However, there are so many aspects to photography such as lighting, composition, and equipment features that can make it difficult to master. Digital Photography School Digital Photography School is a website with simple tips to help digital camera owners get the most out of their cameras. The Photo Argus The Photo Argus is a resource for photographers novice to advanced. Epic Edits Epic Edits is a resource and community for photography enthusiasts of all experience levels. PetaPixel PetaPixel was born in May of 2009, and is a blog about photography geared towards tech-savvy digital photographers. Strobist Strobist is about one thing: learning how to use off-camera flash with your dSLR to take your photos to the next level. Photojojo Joe McNally’s Blog This is the blog of Joe McNally, a phototgrapher for National Geographic, Life, and Sports Illustrated. Photocritic Photodoto

BMX – The Union » Through The Lens: How To Create An Animated .GIF *Click to see larger There has always been something intriguing to me about a .GIF file. They are almost mesmerizing in a way and although they have been around for 25 years and are one of the oldest formats used on the web, they are becoming more and more popular just as programs like Photoshop are making it easier than ever to create your own. It is an amazing way to take a sequence and make it come alive right before your eyes. You can get as creative as you want and honestly the possibilities are endless. Create a folder containing the images that you want to animate. Step Two: Click on “File>>Scripts>>Load files into stack.” Step Three: Go to Window>>Animation. Step Four: Click on the icon in the lower right hand corner to make sure that you are in frame view and not timeline view. Step Five: Now click on the icon in the upper right hand corner again and click “Select all frames.” Step Six: Now that all of the thumbnails are selected you need to set the duration in between photos.

Perception The Best Sites For Online Photo-Editing & Photo Effects | Larry Over the past few years, I’ve been accumulating links to — and experimenting with — various online photo editors and sites for photo effects. There are certainly a zillion of them out there. I finally decided it was time to narrow all the links down into some kind of “The Best…” list, and have divided this post into two sections. The first part lists sites where you can upload your own images and, with no registration required (or, perhaps, in one or two instances, an extremely minimal registration process) easily edit the photo or add effects. I’m sure I will have missed some applications out there, so feel free to share your suggestions in the comments section. Using my categories and criteria, here are my choices for The Best Sites For Online Photo-Editing & Photo Effects (they tend to be fairly similar — with a few exceptions that are primarily “resizers” — so I’m just going to list the links and not describe each one): Tuxpi Change Images Fun Photo Box Thumba Big Huge Labs Dr. Pic Resize